Maybe it was because my daughter was with me.  Maybe it was just one brave (or not very bright) individual.  Or maybe the prairie dogs and otters got together and decided to throw me a bone.  Regardless, my daughter and I had a pretty cool experience watching prairie dogs this past weekend. 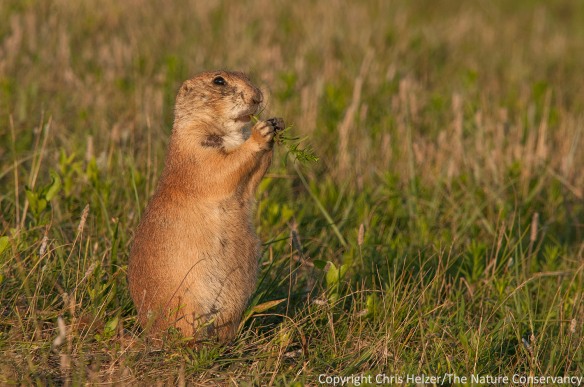 You might recall earlier posts I’ve written about attempts to photograph prairie dogs and otters.  In fact, I know many of you recall them because you ask me about them when we meet in person.  Let’s just say it hasn’t usually gone well.  (Examples one, two, and three, but see also four.)

Last weekend, however, my daughter and I were enjoying a weekend together at the Niobrara Valley Preserve before she leaves for college.  We canoed the river and explored the prairies, and generally had a great time.  The biggest highlight, though, was when we stopped at the small prairie dog town in the east bison pasture.  As we drove the truck into the edge of the town, I was telling her that we wouldn’t likely get a very good look at any of the dogs, so she should look at them in the distance and enjoy the view of them scurrying into their holes.  Based on much previous experience, I told her, “They never let you get very close.” 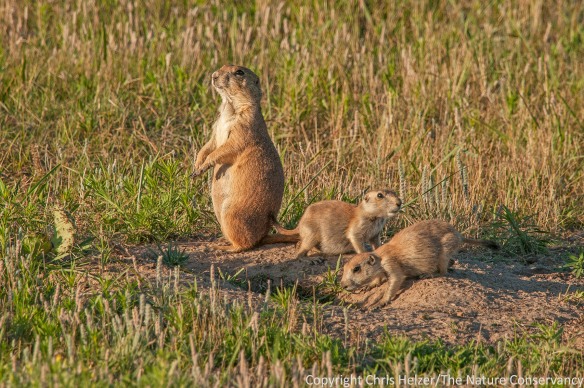 Here are two of the three pups hanging around the burrow.  The third was 15 feet away, feeding.

As Anna and I sat there for a few minutes, I pulled out my camera and took a few photos. For some reason, the prairie dogs seemed largely unconcerned about us.  Eventually, I decided to take a big chance and slowly backed the truck around so that we were a little closer and so that the light was a little better for photography.  The prairie dogs just watched us nonchalantly as we moved.

We watched and photographed them for a few more minutes, savoring the chance to be so close.  I tried a little video but couldn’t hold the camera still enough to make it work well.  Very slowly, I opened the truck door, hoping to set up a tripod behind the door and take video through the open window.  I figured this would likely be the last straw for the prairie dogs, but we’d had a good look already, so it was worth a try.  …Still no response from the prairie dogs.

One thing led to another, and about 15 minutes later, I found myself lying prone on the ground, about 10 feet from the mother(?) prairie dog, photographing her while she alternatively foraged and stood on her hind feet looking alert.  (I’m not sure she understood that while in “alert position” she was supposed to be watching for things like ME CREEPING SLOWLY UP ON HER.)  Eventually, I ran out of both battery and memory card space, and retreated to the truck.  As we turned around and drove away to look for the bison herd the prairie dogs in more distant parts of the town barked warnings and ran for their holes.   You know, as prairie dogs always do… 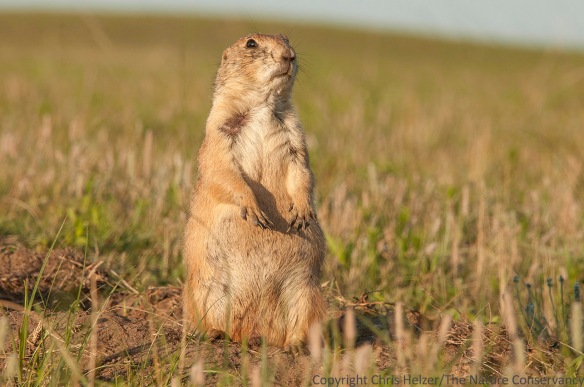 She’s sitting in alert position, but I’m not sure what she’s watching for since she didn’t seem to be concerned about the big creature stalking her with a camera. 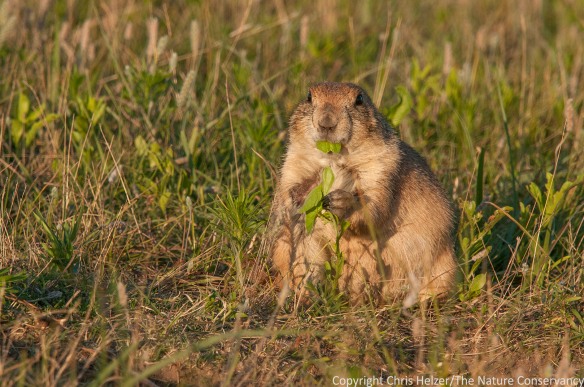 Clearly unconcerned about me, the prairie dog continued to move around and eat.

This short video shows two clips.  If it doesn’t show up correctly, try clicking on the title of this blog post to open it in a web browser.  The first was shot from behind my truck door and shows the mother and pup interacting.  The second was shot later while I was lying on the ground and shows the mom feeding.  Clearly, despite how close I was to the prairie dogs, they weren’t very worried…

I have no idea why this particular prairie dog family was so accommodating, but Anna and I were certainly grateful for the time we spent with it.  I’ll try to head back to the dog town in the future and see if I can find them again.   It shouldn’t be hard if they’re the only ones still aboveground when I drive up to the town.   Alternatively, it’s very possible that a hungry coyote, hawk, or other predator will beat me to it…  While it would be great for photographers and kids if all prairie dogs were easy to get close to, it probably wouldn’t work out well for the species.

Now if I can just find a family of otters…

Anna took this photo of me with her phone. It shows how crazy close the prairie dog let me get. Sure, I was being slow and following the rules of good wildlife stalking, but still…

8 thoughts on “A Conciliatory Gift from the Mammal Community?”