Located between Grand Island and Kearney, Nebraska, The Nature Conservancy’s Platte River Prairies are a chain of grasslands and wetlands that are managed for biological diversity with a combination of prescribed fire and grazing.  These prairies are also working laboratories for the development of innovative techniques for grassland management that restore and/or maintain the diversity of life found in high quality grasslands.  Most importantly, they are full of life, including birds, mammals, reptiles and amphibians, invertebrates, and plants.

We have two public hiking trails that wind through an upland and lowland prairie, respectively.  Please come out and visit!  Click here for more information on those trails.

Rosinweed (Silphium integrifolium) is a prominent flower in many restored Platte River Prairies.

The Nature Conservancy has two primary objectives at the Platte River Prairies.

2. Develop, test, and share techniques for doing that kind of restoration and management work in order to facilitate a much broader conservation impact.

In our prairie restoration work, we convert former crop fields to high-diversity prairie and wetland habitat as a way to enlarge and reconnect small isolated native prairies.  We have seeded more than 1,500 acres since the early 1990’s, often using seed mixtures of more than 200 plant species. 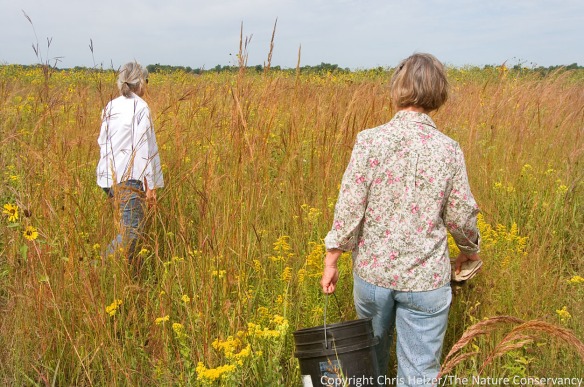 Our goal is not to recreate history or to convert a high percentage of the row cropped lands to grassland.  Instead, we are trying to increase the viability of the prairie species and communities within small prairie fragments by restoring lands adjacent to and between them.  By making those prairies larger, populations of prairie species can be bigger and less vulnerable to being wiped out by disease, fire, drought or other events.  In addition,  increased connection between prairies helps species move across the landscape to find appropriate habitat when conditions change.

While the restoration work we’ve done in the Platte River Prairies has improved habitat for many species, our more important role is to develop restoration techniques and evaluate our success so that we can share what we learn with others.  The Conservancy has become an important source of prairie restoration information for others throughout Nebraska and beyond, and is a founding member and leader of the Grassland Restoration Network (GRN).  The GRN  brings together people from across the country to share their experiences and improve the effectiveness of prairie restoration as a conservation tool.

Our basic steps of prairie restoration – starting from cropland – are the following:

1. Harvest seeds.  This is done mostly by hand, with mechanical seed strippers or combines being used for harvesting major grasses and some other species.  Hand harvesting by just a few people can provide enough seed to plant a couple hundred acres a year.  We try to harvest from as many species as possible, targeting 230 species when a restored site will have habitats spanning from wet to dry. 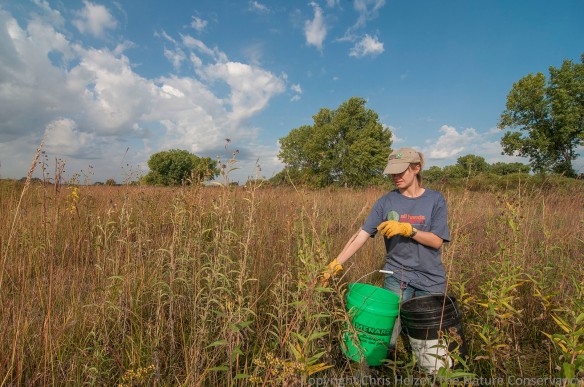 Most seed is harvested by hand.

2. Clean/store seeds.  We do very basic seed cleaning, focusing mainly on breaking seeds apart from each other and removing them from pods/stems so that they can be spread effectively when we plant them.  Seeds are often run through a hammermill and then passed through screens to separate the seed from chaff.  We rarely clean seed with fanning mills other means because our planting methods don’t require seed to be that clean.  Seed is stored in paper sacks or open buckets until it’s time to plant.

Seed is laid out to dry on tarps or in plastic lids and then stored in paper sacks or open buckets/barrels until it is mixed and planted.

3. Broadcast seed.  Seed is planted by broadcasting it on recently harvested cropland with a drop spreader (EZ Flow spreader or similar).  In our sandy loam soils, we have found that no incorporation such as harrowing or packing is needed.  We often plant during the winter, but have seen success on sites seeded anywhere between November and April.

4. Manage the site.  During the first several years of establishment, we do nothing except patrol for noxious weeds and conduct a dormant season burn if there is enough grass to carry fire.  Most early plantings are dominated by annual weeds during the two to four seasons, but we have not found that mowing or otherwise controlling those weeds affects establishment success.  Once the site is dominated by perennial prairie plants, we manage it as we do with any other prairie – with a combination of prescribed fire and grazing.

Regal fritillary butterflies are abundant in the Platte River Prairies and are attracted to the diverse floral resources in our restored prairies.

We spend considerable time and effort evaluating the success of our restoration efforts so that we and others can learn from them.  Our assessment work has so far shown that almost every plant species we’ve harvested seed from has become established in our seedings, though some are more difficult than others.  More importantly, the diverse plant communities we have established have maintained that plant diversity over as long as 20 years of our fire/grazing management, showing that they are ecologically resilient. 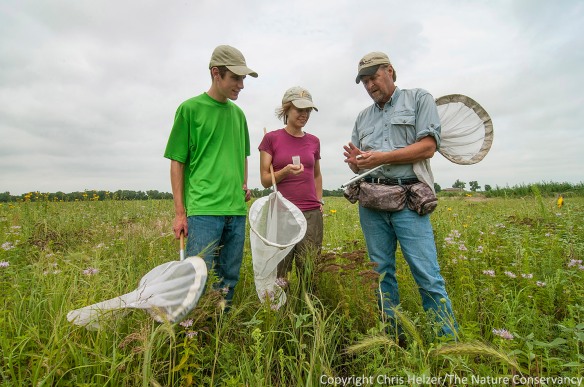 Studying the way native bees are responding to our restoration work has been a major focus over the last several years.

Beyond plant communities, it’s important for us to see whether or not our restored prairies are truly enlarging and reconnecting fragmented prairies.  We have begun studying species such as ants, bees, and small mammals to see whether or not they are moving into our restored sites.  So far, our results have been very positive, but there is much more to learn.  We are also working with partners to experimentally assess the relative value of high diversity and low diversity prairie seedings from multiple perspectives, including invertebrate diversity, soil health, resistance to invasive species, and ecological resilience.  The lessons we learn are shared through the Prairie Ecologist Blog, annual Grassland Restoration Network workshops, and numerous field days and presentations by Conservancy staff.

A training session for Nebraska Master Naturalists at the Platte River Prairies.

Our management of the Platte River Prairies is aimed at providing a wide variety of wildlife habitat and building and maintaining biological diversity and ecological resilience.  We are constantly experimenting with combinations of prescribed fire and grazing treatments, along with targeted invasive species control strategies.  Our hope is not to develop a cook book for others to follow, but to find some key strategies or principles that other people can incorporate into their existing management system, regardless of whether they are private landowners or public land managers.

Prescribed fire is an important part of our management. It helps control woody growth, stimulates grazing, and can help suppress invasive species – among other things.

Much of our time is spent on two main management objectives:

1. Create patches of habitat structure including short/sparse, tall/dense, mixed-height/weedy, and more.  Shift the location of these habitat patches around the landscape from year to year.

2. Maintain plant diversity by periodically allowing every plant species the conditions it needs to grow, flower, and reproduce.  Because every species has unique needs, this requires the application of intensive grazing or other treatments to weaken dominant grasses in some years, but relatively long rest periods in other years.

Patch-burn grazing is one broad approach to reaching those two objectives, and we spend considerable time testing variations on that theme.  Some of what we have learned has been captured in a brief report that can be found here.  Patch-burning is only one way to meet our objectives, and we are experimenting with others, including the Open Gate Rotational System, which creates the same kinds of habitat without relying on consistent use of fire.  Most importantly, there are countless ways to tweak existing grazing systems used by ranchers and farmers to improve habitat diversity and quality without sacrificing production and we work with landowners and their advisors to help find options that work well for them.

Recently burned patches attract intensive grazing by cattle, even as the grass first pops out of the ground after the burn. Because cattle preferentially graze burned patches, unburned patches are much less intensively grazed and provide different habitat and growing conditions for wildlife and plants.

As with our prairie restoration work, we spend considerable time evaluating the impacts of our management strategies.  We have shown that we can maintain, and in some cases increase plant diversity through management – though we have also experimented with overseeding missing plant species with some success.  Now we are trying to assess impacts on a broader suite of species and communities (birds, invertebrates, small mammals, etc.) as well as on the ecological resilience of those prairie communities.

Many plant species, including four-point evening primrose, thrive when dominant grasses are temporarily weakened by grazing or other management. These flowers appeared in abundance a year after a summer fire and grazing treatment. 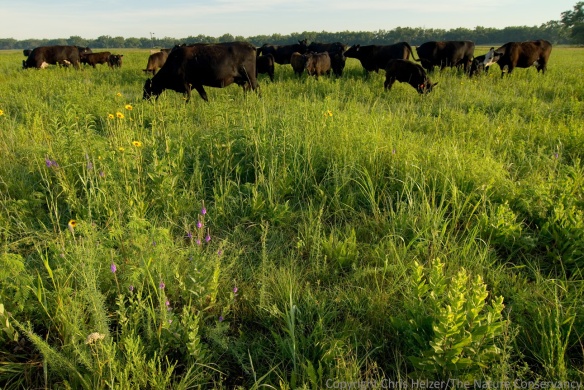 While intensive grazing is a useful strategy for maintaining biodiversity, a light stocking rate can also create valuable habitat because cattle grazed selectively, cropping some plants short and leaving others – creating patchy habitat valuable for many wildlife species.

We collaborate with researchers from multiple universities on projects to help understand and evaluate the impacts of our management.

While prairies are our major focus, the Platte River Prairie properties also include wetlands, woodlands, and riverine habitats.  We restore and manage those habitats as well.

This restored wetland was formerly a lake formed by sand and gravel mining. 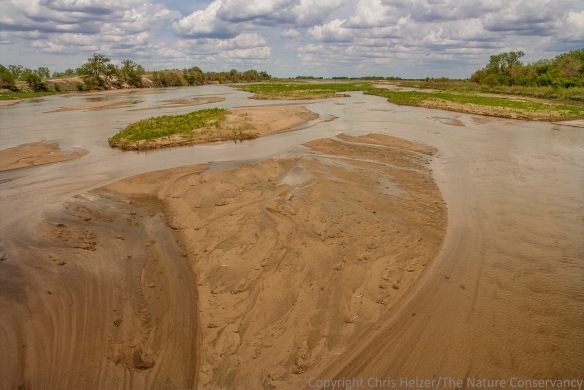 One big perk of working in the Platte River Prairies is that we get to be witnesses to the annual migration of sandhill cranes.  Each year, roughly 600,000 cranes stop by the Platte River between late February and early April.  They roost on the river overnight and then feed in meadows and fields during the day, building body condition to prepare for the long nesting season further north.  It is one of the greatest migratory phenomena in the world. 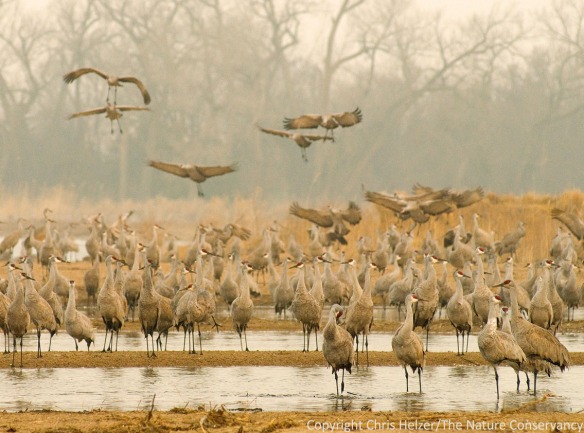 Sandhill cranes roosting on the Platte River in March.