This post was written by Evan Barrientos, one of our Hubbard Fellows.  Evan is a talented writer and photographer and I encourage you to check out his personal blog. If you would like to see more of his photographs, you can follow him on Facebook.

“Did you hear we’re supposed to get a foot of snow next week?” I heard someone say. Nonsense, I thought to myself. I had just checked the weather and snowstorms always seem to get overblown. But the whispers continued to build during the rest of the week. I remained staunchly skeptical until I looked out my window the morning of February 2. Okay, it’s a blizzard.

I heard Kim yelp and looked in time to see her slamming the patio door shut as  snow caved in on her. Despite the warning, I foolishly tried opening the front door to take a photo. More snow fell in, but for some reason the door wouldn’t fit back into its frame! I frantically tried slamming the door several times as the blizzard invaded our house, but the door refused to go back. Finally, a simultaneous kick and push won the argument. I resigned myself to taking photos through the ice-plastered window.

I could only resist the temptation to venture outside for a couple hours. Would I feel 45 mph gusts of wind through five layers? I wondered. I grabbed a camera and decided to trudge against the wind (If I started walking downind I might underestimate the return trip and never make it back, I thought). What surprised me more than the wind were the snowdrifts, which I had never experienced in Wisconsin or New York. On my first step I sank halfway up my shin in snow, but on my next the snow seemed to open its mouth and swallow me up to my thigh. It probably took me five minutes to walk 50 yards into the prairie. The sound of Canada Geese emerged over the wind and I looked up in disbelief to see a flock struggling against the storm. My heart sank as I thought of the hundreds of hopeful Sandhill Cranes I had seen just two days ago when it was 55 degrees. 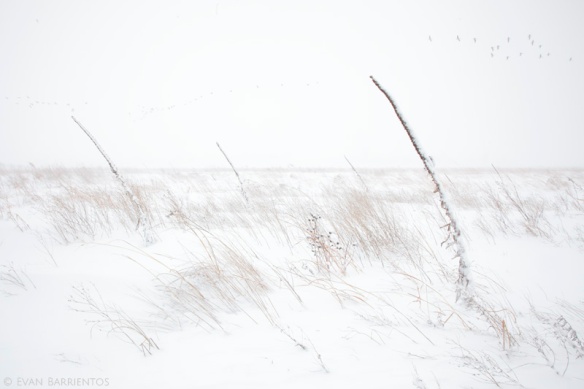 That 50 yard trek was all my nostrils wanted to handle for one day, but the next morning I headed out to survey the blizzard’s aftermath during a calm sunrise. Two things struck me that day: incredible snow formations carved out by the wind and a surprising abundance of signs of life.

I skied to work and in the afternoon I took a break to explore the West Trail of the Platte River Prairies. Lots of wildlife seemed to be taking advantage of these trails as well, but it surprised me how active they were so soon after the storm. Tracks of coyotes, pheasants, deer, mice, and jackrabbits (a first for me) were abundant. 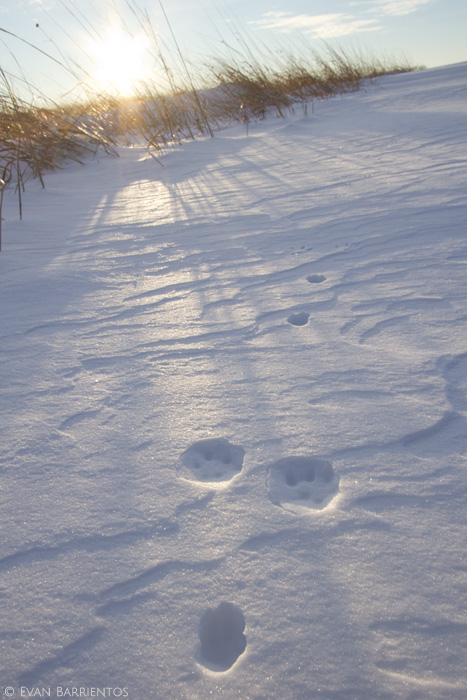 If it weren’t for the characteristic “Y” pattern of these jackrabbit tracks I would’ve thought that these massive paws belonged to a coyote.

Halfway around the trail I spotted a large hole in the deep snow, and peered inside to see what could’ve made such a strange formation. When I saw what was in there, I cautiously retreated, pulled out  my camera, and started filming:

(If the video doesn’t show up on your device, try clicking on the title of this blog post and then look again.)

Well that’s one way to find shelter from a blizzard: let the blizzard make it for you! The pheasant must’ve put his back to a clump of grass and waited as the snow accumulated around him until it formed a perfect wind shelter. The patience of animals amazes me; that pheasant had to have been sitting there since it started snowing the night before, and it was now past 1 pm!

Stiff Goldenrod (Oligoneuron rigidum) buried under a foot of snow.

By 5 pm the golden light was absolutely gorgeous and I was eager to ski back home. I took a detour around the East Trail into the sandhills and marveled at many more snow formations.

On the last leg of the trip back to my house I spotted a flock of about 40 American Tree Sparrows feeding in the soft light of the setting sun. After a long day of eerie silence, their tinkering calls sounded sweeter than ever. Rather than hopping along the ground the way I normally see sparrows feed, they were all leaping a foot into the air and fluttering back down, like a pot full of popping corn kernels. I didn’t have binoculars, but I’m assuming  they were gleaning seeds off of the half-buried grasses. Lately I have been seeing  American Tree Sparrows forming larger and larger flocks, reminding me of how the Bobolinks grouped together before migrating south. Normally I would rejoice at a sign of winter’s end, but standing there in the gold and white prairie with the sweet tinkling calls the sparrows, I realized that I would miss the stillness of winter… well, at least for a little bit. 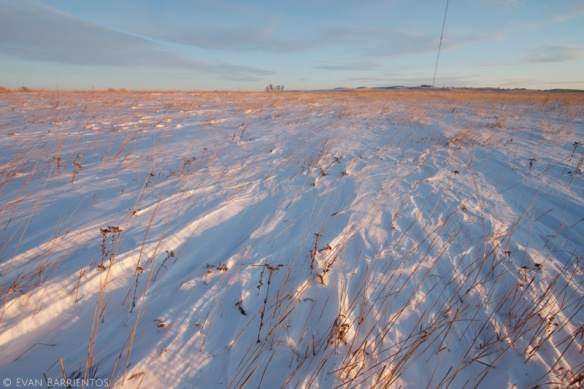