This post was written by Evan Barrientos, one of our Hubbard Fellows.  Evan is a talented writer and photographer and I encourage you to check out his personal blog. If you would like to see more of his photographs, you can follow him on Facebook.

April 2nd was the kind of spring day where you triumphantly open every window in the house. I wanted to get out and explore somewhere new, so I drove to the Fort Kearny Hike and Bike Trail. When I arrived, a bored-looking family was slowly rolling down the weedy trail…in a golf cart. I despaired, thinking that I had driven half an hour to look at weeds with joggers huffing by. Nonetheless, I walked down the crowded trail for a couple of uneventful minutes minutes until it crossed over the Platte River. Much to my relief, there was a staircase inviting visitors to explore the sandbar below. I descended the stairs and started exploring the one place no one else was. It would be another three hours until I returned.

I began by walking in the thicker vegetation, hoping to flush some of the first insects of the year. As I did, several small spiders scurried away. I knelt down to look at them and noticed a few gnats mating on the blades of grass. After a long winter with no insects, these gnats were as exciting for me to photograph as Sandhill Cranes. 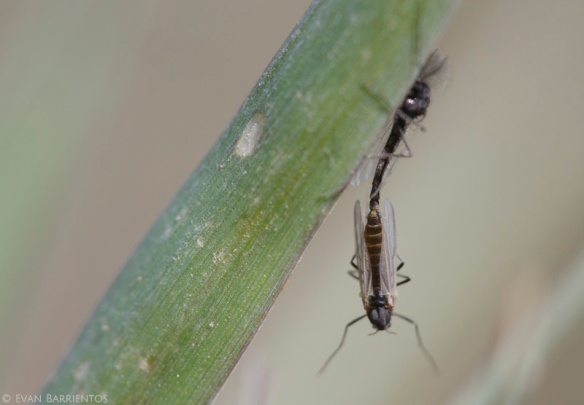 Once I was on my belly, more details revealed themselves and a story began to unfold. A few feet from the gnats I spotted a muscid fly. I’m grateful that winter had made me so appreciative of even the common insects; otherwise I might not have taken a closer look. I did, however, and noticed that this wasn’t your typical potato salad-sucking housefly. It was devouring one of the gnats!

The calls of sandpipers drew my attention away from the microcarnage and I went over to the open part of the sandbar. There, I found a migratory flock of Baird’s Sandpipers foraging in the mud. I sat and watched them, wondering how they could possibly find enough food in the muck to sustain their 3,700-mile migration from Argentina. When they flew away, I thought I’d try to figure it out. A tiger beetle distracted me and I started stalking the speedy predator on my belly. Each time I would crawl close enough for a decent photo he would dart a few inches ahead. For several minutes this continued until he had led me to the muddy edge of the sandbar. There, with my nose inches away, it dawned on me how much amazing life that mud contained.

With my camera flat on the ground I spent an hour discovering and photographing insect after insect, many of which I had never seen before. I’m no expert, but I know my insect families fairly well. Yet two of these species were so alien I can’t even tell what order they’re in! If you know, please tell me! 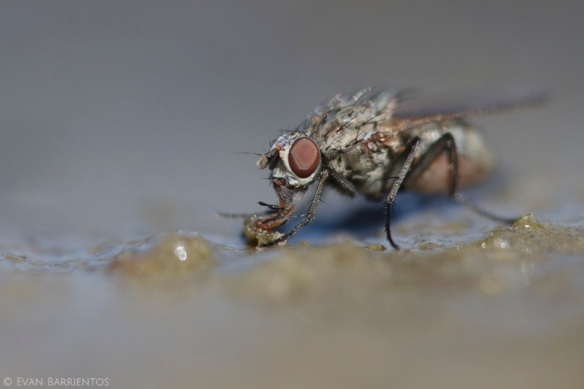 These muscid flies reminded me of sandpipers on a much smaller scale. Both patrol the same mudflats, probing the ground for food. The flies, however, let me watch them from inches away.

This even smaller fly might be contributing to the sandpipers’ food supply. Occasionally I saw the fly press the tip of her abdomen to the mud, perhaps laying eggs or larvae that the sandpipers would certainly slurp up.

Almost every one of these flies was paired with a mate. Presumably, the male is on top, guarding his female from other males while she tries to go about her life as normal. I don’t know that for sure, but I do know of another species that mates this way.

This mystery insect delicately unfolded her cellophane wings in front of me. I have no idea what kind of insect it is. A beetle? 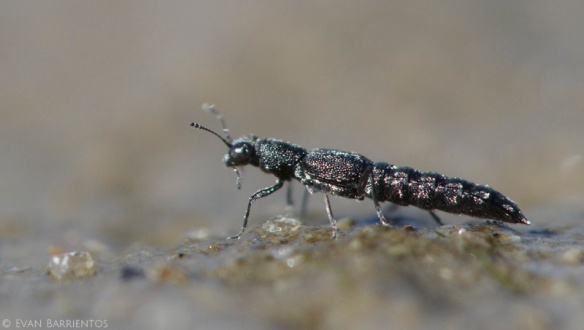 Another mystery insect. I’ve never seen anything like this! 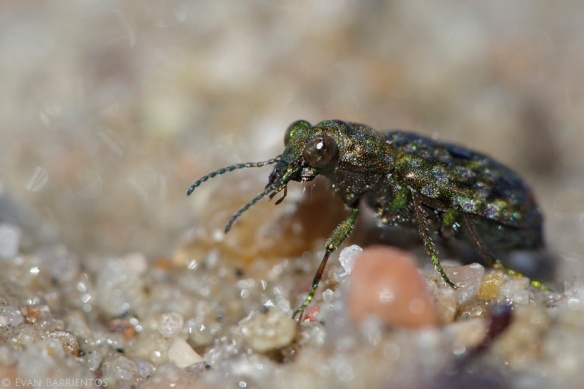 At first I thought this little jewel was a tiger beetle, but I later learned that it’s a marsh ground beetle (Elaphrus sp.). Never seen one before!

Springtails were the tiniest and most abundant invertebrates present, but finding them in my viewfinder was impossible because of their size. I only managed this photo because the springtail jumped into the frame while I was photographing the flies in the background.

Above the muddy valley, a spider hunted for prey.

After completing my goal of photographing every species I could find in that puddle, I got up, stretched my very sore neck, and walked over to the other side of the sandbar. There, I found a small pool with about a dozen small fish huddled together (later identified by Chris as Plains Killifish, Fundulus zebrinus). I began crawling over to them but stopped when I heard some splashing coming from a trickle of water connecting the pool to a larger one. I went to investigate and realized that the splashing was coming from the fish as they struggled to swim through the shallow channel! Like tiny salmon, fish after fish darted through this passage. I wish I knew more about them, but I can only guess that they were on a reproductive migration.

The killifish were extremely wary and freakishly good at spotting me from underwater. I crawled up to their stream and lay still, waiting for them to swim by. I don’t know how they could see me so easily, but I learned that if I moved even the slightest bit they would panic and turn back. After many frustrating failures, I only managed to record a few mediocre videos of this fascinating behavior. To give you an idea of how quick these fish were (and how hard it was to photograph them), these videos are in slow motion at half-speed.

At this point my knees, neck, and elbows could tolerate no more strain. I walked back to my car smeared with mud and drawing lots of puzzled looks. But that was okay, because that mud had given me an afternoon of joy and wonder. If you ever find yourself bored in nature, I recommend you get off the trail and on your belly.

7 thoughts on “Hubbard Fellowship Blog- Marvels in the Mud”