Believe it or not, I really do like birds.

But here’s the thing.  I just read yet another study of grassland birds in which the researchers looked at the relative importance of variables such as habitat structure (tall, medium, and short grass, amount of shrub cover, etc.) and landscape composition (how much grassland is in the landscape).  It was a nicely designed study, but I found myself wondering how much value these kinds of studies are really adding to our ability to do effective grassland conservation.

A dickcissel sings from the top of a Woods' rose in restored Platte River prairie. Compared to most other kinds of animals and plants, we have a pretty solid understanding of the breeding habitat requirements of dickcissels and other grassland breeding birds.

Yes, we still have a lot to learn about grassland birds and their habitat requirements.  The more we learn, the better able to design conservation actions to help birds.  On the other hand, we already know an awful lot about grassland birds relative to other groups of grassland species like snakes, ground squirrels, grasshoppers, leafhoppers, fungi, and nematodes.

It’s kind of like we’re going to high school but only really studying in art class.  Art is important and enjoyable, but focusing only on art is not going to prepare us very well for dealing with the world.

If I was going to design a grassland landscape to maximize bird conservation, I think I could do a pretty good job based on what we know right now.  I’d start with multiple large blocks of prairie (hundreds of acres in size – much bigger, if possible).  Those blocks of prairie would need to include both upland and lowland grassland areas, and be floristically diverse enough to support an abundant supply of insects and seeds.  I’d include some scattered patches of shrubs and small trees in the landscape, but would place them so that there are still large areas of grassland with no woody vegetation at all.  Management would be important, and I would try to ensure that a variety of habitat structures was available each year, including the whole continuum between very short-cropped vegetation and tall dense and/or weedy cover.  It would be great to have those habitat types mixed together such that each block was a decent size (20 acres or more?) but that they were close enough together that birds species requiring more than one cover type during a season can easily move between them.  I’m sure those more up to speed on current literature might add a few tweaks to this landscape design, but I think this covers the more important components.

Sure, there are still a few holes in our knowledge of, especially in terms of their requirements for migratory habitat, but as a whole we’re in pretty good shape.  I would argue that our biggest limitation is not the ability to predict what birds need, but rather our ability to implement the necessary changes on the land.  However, that only applies to birds.  Does anyone feel they could similarly and accurately predict the landscape scale habitat needs of the smooth green snake, Franklin’s ground squirrel, or the long-jawed orbweaver spider? Not me.

A smooth green snake found in the Platte River Prairies, Nebraska. Very little is known about the habitat and/or landscape requirements of species like this one. We don't even really know much about how many there are. They are considered to be rare in most places, but we find them fairly regularly in our prairies - they're just really hard to see!

It would be different if we were confident that a landscape designed for birds would provide for the needs of all other prairie species.  I think we’re far from being able to say that.  Here’s just one reason I’m skeptical:  Grassland bird species are extremely mobile, and most migrate long distances between breeding seasons.  This allows those birds to find the best appropriate habitat (within reason) each year, even if that habitat isn’t where it was the previous breeding season.  Most other grassland species don’t have that kind of mobility, but many (most?) of them have fairly specific habitat structure requirements.  When the habitat structure where those species are living changes, how far can they travel to find appropriate habitat?  What kinds of terrain can they cross?  These are questions with huge implications for how we should be managing prairies and prairie landscapes, but we can’t do anything but make wild guesses because although we know how birds deal with those issues, we don’t know how most other species do.

I explored this issue of birds as indicators for the conservation needs of other species in an earlier post, if you’re interested in reading more.

Mice are fairly mobile species (compared to wingless invertebrates, for example) but we still know relatively little about their ability to find the kinds of habitat structure they need. When conditions change, do they travel long distances in search of appropriate habitat? Or do they just hunker down and wait for better times? If they travel, how far can they go, and what challenges do they face?

So why are we still spending so much time studying birds instead of branching out to other species and broader questions?  One big reason is inertia.  Scientists rightly like to build upon previous projects, so because there have already been a lot of studies of birds, there is a lot to build upon.  This makes sense in terms of efficiency (study methods are already designed and tested) and from the standpoint of funding availability (it’s often easier to sell a project that is builds upon what we already know than one that is reaching into the unknown).

A second reason we study birds so much is that they’re relatively easy to see, hear, and identify.  Since most research is done by graduate students and technicians, picking species that can be learned quickly is very helpful.  I should know – I did my own graduate research on grassland birds!  However, since then, I’ve learned that it’s not that hard to pick up on the sampling and identification skills needed to study other organisms, and that with invertebrate species, there are experts that can do the identification for you.

Of course, the biggest reason we study birds so much is that we LIKE birds so much.  If ground beetle watching was as popular as bird watching, prairie research and conservation efforts might look very different!  The irony, of course, is that we’re essentially focusing a very large proportion of our research and conservation effort on only a dozen or so grassland bird species (in any particular landscape).  At least if we were studying ground beetles, we’d be looking at several times that many species – and while I don’t know that much about ground beetles, I’ll bet they would be equally good indicators of the “health” of the prairie ecosystem.

A sedge wren on velvety gaura in the Platte River Prairies. Tiny birds, with cute little tails and aggressive personalities, sedge wrens are great examples of why birds are so compelling to people.

Look, I get it.  We’re not going to turn this battleship on a dime and move all the bird research funding and effort into smooth green snake and ground beetle research within a year or two.  However, I do think it would be really valuable for those doing bird research to incorporate broader community questions into their projects, whenever possible.  Maybe we could start by asking questions about how well birds really do represent the needs of other species?  Would funders of grassland bird research be open to that line of exploration?  It would allow us to build upon what we know about grassland birds by testing those known parameters on other taxa.  If we could figure out where the needs of birds and other species diverge, that’d be a great step forward in terms of defining future research needs.  Are great prairie chicken landscapes also great grasshopper landscapes, or not necessarily?  Do sedge wrens and massasaugas have similar habitat needs, or at least compatible habitat needs?  If not, how do we balance the needs of both species?  Let’s build on what we know about birds, but do it through some comparative analyses with other species.

Because you’ve got to admit – ground beetles are pretty cute too! 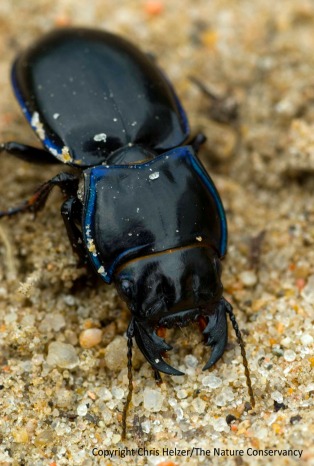 Ground beetles like this one (Pasimachus sp?) are abundant and diverse members of the prairie community. What do we know about their conservation needs? Not much.

25 thoughts on “Why Are We Spending So Much Time Studying Birds?”