As I mentioned last week, I recently spent a couple days helping our land manager, Nelson Winkel, pull garlic mustard at our Rulo Bluffs Preserve in southeast Nebraska.  The invasive species has just started to invade our property within the last several years.  We’ve heard stories from colleagues in other places about beautiful woodland plant communities turning into monocultures of garlic mustard within a relatively short time period.  We’d sure like to keep that from happening at our Preserve.

So, we pulled garlic mustard plants.  A lot of them.  On the first day, I figured we pulled at least 25,000 plants.  That’s a very conservative estimate.  The second day was longer, but we did more searching and less pulling.  This wasn’t the first trip to pull either, so we were just trying to get what was leftover from the previous efforts. 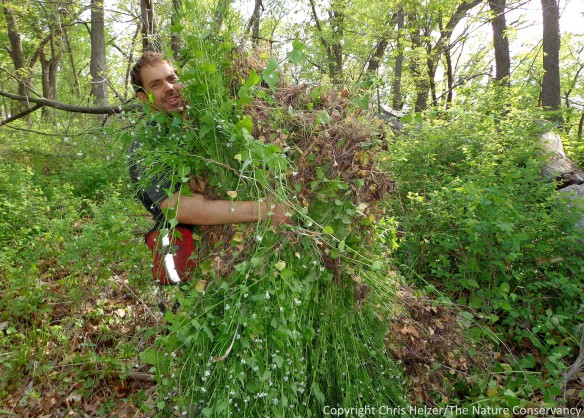 The Rulo Bluffs Preserve is 444 acres.  Hand-pulling weeds doesn’t seem like a very sustainable strategy for invasive species control at that scale.  In fact, it’s downright depressing because we pull more plants from more locations every year.  We’re clearly not winning.  So why bother?

It’s a good question, with several answers.  The first answer is that we’ve got some ideas for increasing our effectiveness.  Nelson and I talked as we worked about how we might put together a small army of volunteers to come help us pull each spring.  The big challenges are that the site is far from population centers (more than two hours from Lincoln and Omaha), has difficult terrain to hike in, and garlic mustard doesn’t bloom at exactly the same time each year, so we’d have to schedule work days on fairly short notice.  On the other hand, I think there are people who’d be glad to help, and it is a beautiful place to work in the spring time – lots of warblers and other birds above, and plenty of woodland wildflowers below.

In addition to finding more people to help hand pull, we hope to decrease the number of plants we need to pull in the bigger, more established, patches by doing some herbicide work in the late winter.  Garlic mustard is a winter annual or biennial which germinates in one season, overwinters as a rosette (a few leaves, low to the ground), and then flowers in the late spring of the next year.  Our colleagues in more eastern states have been dealing with garlic mustard longer than we have, and have had luck spraying the rosettes with Glyphosate herbicide on warm February days.  Spraying in the winter works well because there are very few other woodland plants that are green (and thus susceptible to Glyphosate) in February.  They don’t usually spray in the early winter because many rosettes die on their own over the winter, and by waiting until February, they can focus only on those most likely to bloom in the coming year.  Nelson was marking the bigger patches we found with a GPS unit so he can find them next winter and try the spraying technique.

Small patches of garlic mustard such as this one might eventually be eliminated by hand-pulling – especially if we find and treat them every year.  Larger patches are much more problematic.

The second reason we’re still trying to suppress garlic mustard is that I hope we can buy some time until better control options become available.  There has been some work to develop a biocontrol technique (using insects from the native range of garlic mustard), for example, and if something like that turns out to be effective, I want to be sure we still have some woodland left to save.  Unfortunately, I’m hearing that biocontrol development has stalled at the moment.  Apparently, in at least some places, people are seeing garlic mustard populations decline steeply on their own – as if the plants are outcompeting themselves and self-thinning.  That could be great news, but only if the native plant community rebounds as the garlic mustard declines, and I haven’t been able to find anyone who can tell me whether or not that’s the case.  I sure hope it is, but I’d feel better if the biocontrol folks kept forging ahead on the development of that control option anyway.  Regardless, I’m holding out hope that either garlic mustard will turn out to be a temporary nuisance (seems unlikely?) or that biocontrol or better control options will be developed in the next several years.  I could be naive, but at least it gives us something positive to think about while we’re pulling up thousands of garlic mustard plants…

While we look for better control options, we’re also trying to change the playing field for plant competition at Rulo Bluffs and give garlic mustard less of an advantage.  With considerable help from Kent Pfeiffer of Northern Prairies Land Trust, and funding from the Nebraska Game and Parks Commission and others, we’ve been trying to ramp up our stewardship work during the last several years.  We’ve not done as much burning as we’d like to, but are earnestly trying to change that.  Last fall, a contractor did some “hack-and-squirt” herbicide treatment to kill many of the smaller understory trees that are shading out the herbaceous plants on the ground.  We’ve also been doing mechanical shredding of brush on ridgetops to help the grassland, savanna, and open woodland plants there.  All of this work is aimed at getting more light to the ground, which should stimulate increased oak regneration and a stronger, more diverse, herbaceous community on the woodland floor.  In addition, we hope that increased light will put shade-loving garlic mustard at a disadvantage, at least in some parts of the woodland.  From talking with others around the country, they’ve seen mixed results from similar work.  I guess since we want that light on the ground anyway, we’re going to forge ahead – and hope we don’t make things worse.

Jack-in-the-pulpit is one of many woodland flower species that help make the Rulo Bluffs Preserve unique and valuable.

Finally, we’re pulling garlic mustard because the Rulo Bluffs Preserve is worth the effort.  It’s one of the few remaining high-quality oak woodlands in Nebraska, and hosts a wide diversity of plant and animal species – many living at the edge of their geographic range.  In addition to lots of mayapples, jack-in-the-pulpit plants, and woodland phlox, we also found two orchid species blooming last week – the showy orchid and the yellow lady’s slipper orchid.  We walked around beneath eastern deciduous tree species such as chinkapin oak, black oak, and Ohio buckeye.  Several animal species at the preserve, including zebra swallowtails, timber rattlesnakes, and southern flying squirrels, are only found on the very eastern edge of Nebraska.  While some of those species are common to the east of us, it is probably important to protect their genetic diversity by maintaining populations across their entire range.  That should allow the species to better adapt and survive in changing conditions over time.

Genetic and biological diversity aside, the Rulo Bluffs Preserve is also important because it’s a beautiful place.  We need to keep some aesthetically-pleasing natural areas around for people to enjoy.  Despite our aching backs, Nelson and I had a great time exploring the preserve last week, marveling at warblers, flowers, velvet mites, and other wonders.  It’s possible that we’ll invest a tremendous amount of time and money into stewardship and restoration at the Rulo Bluffs Preserve over the next several years and still lose out to garlic mustard.  There are plenty of examples of that happening elsewhere.  I guess we’re not ready to concede the battle, however – there’s too much at stake.

19 thoughts on “Blowing Against the Wind?”