During the big sandhill crane migration spectacle each spring, about 600,000 cranes stop by to visit the Platte River.  Most of them stick around for a few weeks, put on as much body fat as they can, and then head north to nesting grounds.  However, a very low percentage of cranes never get to leave.  Some are killed by powerlines or predators, others just die of old age or other ailments.  We see these dead birds here and there through the spring, and so do the predators and scavengers that take advantage of the abundant food source.

Our crew stumbled upon a dead crane this week, and before the scavengers got to work on it (much) I took advantage of the opportunity to get some close up photos.  It’s not often I get this close to a crane, and I’m guessing the same is true for most of you. 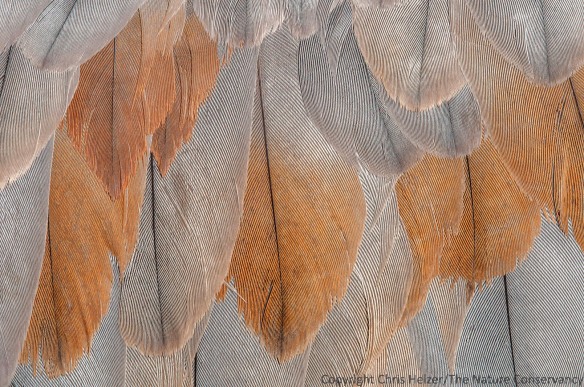 Wing feathers of a dead sandhill crane, found along the Central Platte River in Nebraska.  As always, you can click on an image to see a larger and sharper version of it.

The combination of gray and brown feathers on the wing are particularly attractive.  The gray is the natural color of the crane’s feathers, but they stain their feathers by spreading iron-rich soil on them.  I’ve actually watched them do this in our restored wetlands, where streaks of iron deposits can be seen in bare sand.  In places where the sand is saturated when groundwater is high and dry when groundwater falls, the iron in the sand rusts and turns a deep reddish brown.  We use those rusted iron deposits as indicators when we’re deciding how deep to excavate wetlands during the restoration process, but they’re also a great place for cranes to find staining compound!

Given the propensity of humans to dye their gray hair other colors, we probably shouldn’t wonder at cranes doing the same kind of thing.  At least cranes can claim (legitimately) they’re doing it for camouflaging purposes.

While the wing feathers were very pretty, the head of the dead crane was the most interesting to examine up close.  Some of you may know that the red patch on the head of a sandhill crane is not made up of red feathers, but is actually a (relatively) bald patch.  The red cap is a sign of maturity for these cranes – birds hatched last year don’t yet have one.

In cranes, at least, “crane-pattern baldness” is a good thing.

A close up of the red patch on the head of a dead sandhill crane, showing the absence of feathers.