This post was written by Evan Barrientos, one of our Hubbard Fellows. Evan is a talented writer and photographer and I encourage you to check out his personal blog. If you would like to see more of his photographs, you can follow him on Facebook.

Even after photographing for 11 years, I’ve only recently learned that taking truly great images requires immense amounts of time and personal sacrifice. Each time I peeled myself out of bed before sunrise to photograph the Sandhill Crane migration, I was forced to ask myself, “Why?” Crane migration is such a popular event out here and so many people have already photographed it. What could I contribute? I wasn’t able to answer this question until after crane migration had passed, but somehow I couldn’t resist returning to the Platte River over and over. I wanted to document a day in the life of a crane on the Platte in both photos and video. When I finally completed my video, I knew all those cold, dark mornings had been worth it.

Sunrises with the cranes were exhilarating. I would arrive at the blind (a shelter photographers use to hide from animals) an hour before sunrise. Just when there was enough light to see them, they would begin to ‘dance’ en masse. Usually this spectacle lasted for only a minute, but individual birds would continue to dance throughout the sunrise. Although this behavior was wonderful to watch, it was extremely difficult to photograph well. The main reason was that each dance only lasted for a few seconds, so by the time I had one in my viewfinder it had usually stopped. On top of that, in was nearly impossible to isolate an individual with so many birds around. Many almost-great photos were ruined by a heads, legs, and wings sticking into the frame. Below is the only photo I captured of a lone dancer. 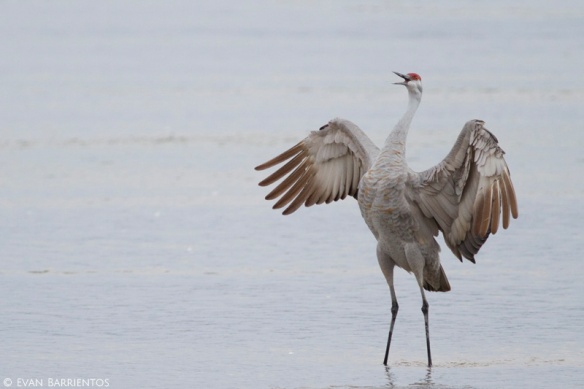 I was surprised by how complex the cranes’ personalities were. In my opinion, cranes are overly-portrayed as blissful dancers. More often, I saw them as cranky squabblers. During my sunrises on the Platte, the cranes seemed very preoccupied with pecking and chasing other cranes. I even saw one repeatedly sneak up on an innocent Canada Goose and jab her back! Canada Geese are quite aggressive when nesting, so I was really surprised when this one submissively accepted the crane’s harassment without so much as a honk. 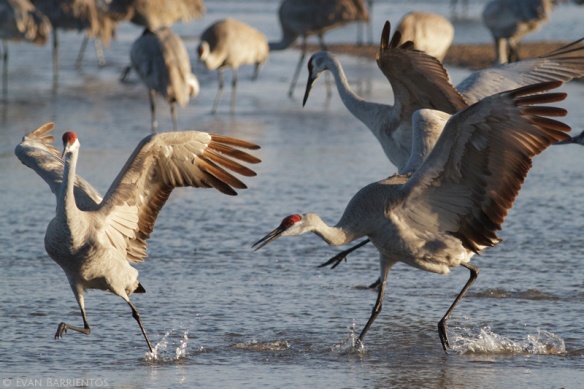 After much dancing, squabbling, and preening, the birds would begin leave the river. I took a lot of crane flight photos. Of course, very few of them were any good. When photographing flight, I experimented with two approaches: the standard, sharp image… 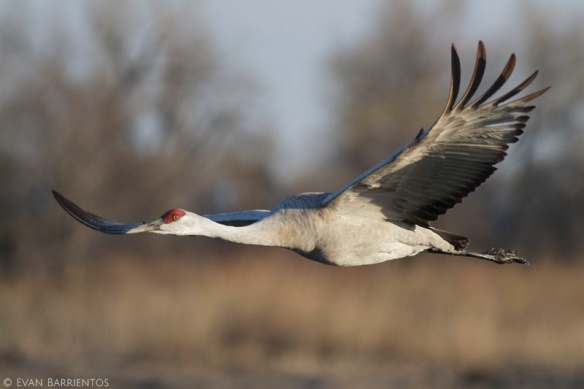 …and the more abstract, slow shutter speed, panning image. This image requires panning your lens at the exact same speed as the subject. It was great to have infinite opportunities to practice this difficult technique. Below is my favorite result: 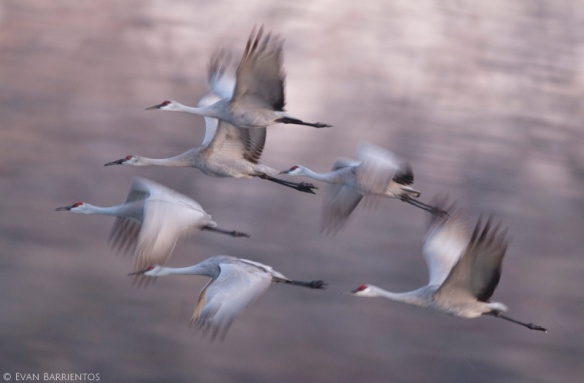 Gradually, the river would begin to empty and my memory cards would fill. Finally, I would leave the blind half frozen but exhilarated. The cranes would spend the rest of the day foraging for leftover corn in the surrounding cropfields and I would enjoy the ever-present drone of their calls while I worked in the prairie. 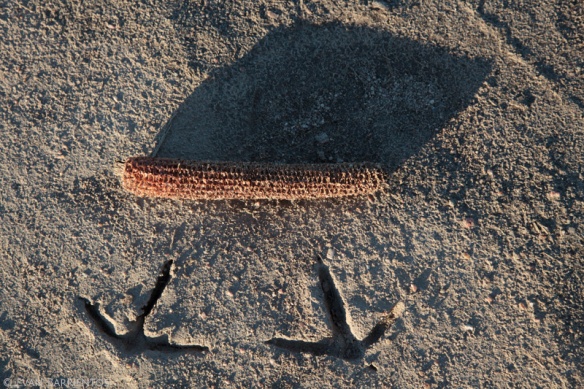 Sunsets were an entirely different experience. Rather than greeting you with the sight and sound of thousands of cranes, sunsets made me wait in excited anticipation. When will they arrive? Where will they land? Will the sunset light up the sky? Slowly but surely, the cranes would appear, their numbers building until culminating in a deafening crowd. It was slightly juxtapositional: as the sky darkened and the wind softened, the flock would grow bigger and louder. 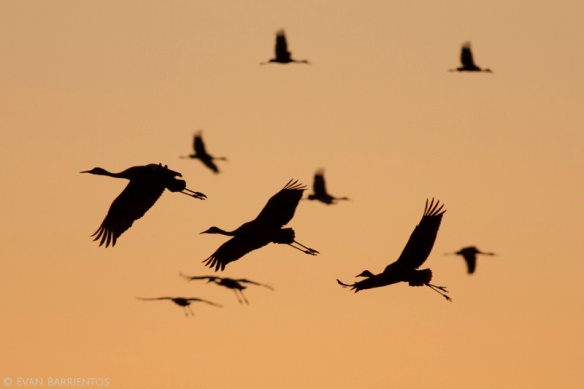 No two sunsets or sunrises were the same. Usually, the birds would arrive gradually in flocks of a hundred or so, but one night the birds were unusually late. Fifteen minutes after sunset there were hardly any birds on the river and I was beginning to worry that the tour I was leading was going to be a dud. Then, in a spectacle I hadn’t seen before and haven’t seen since, the majority of the roost (several thousand cranes) whirled overhead and landed all at once… right in front of us. That was a truly awesome experience. 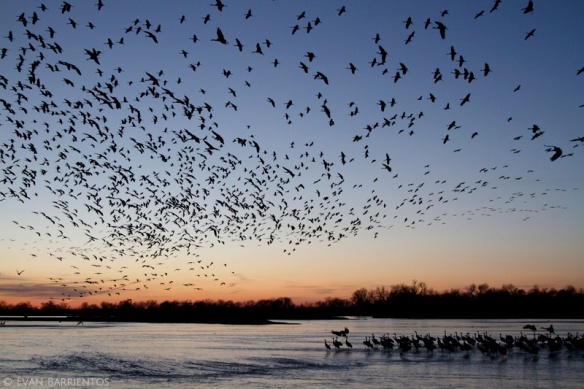 As I said earlier, I never regretted a trip to a crane roost, but there was one trip that I did regret at first. It was a very cloudy evening. I was hoping that the sun would peek out from below the clouds as it set, but not a ray of sunlight shone that night. Instead, I was stuck with a very dim, gray river. To avoid disturbing the cranes, I couldn’t leave the blind until it got darker, so I amused myself by setting my camera to an absurdly low shutter speed and taking some photos as the birds flew by. It wasn’t until the next day as I was looking through my photos that I realized how valuable the trip had been. This might be my favorite crane photo of the season. 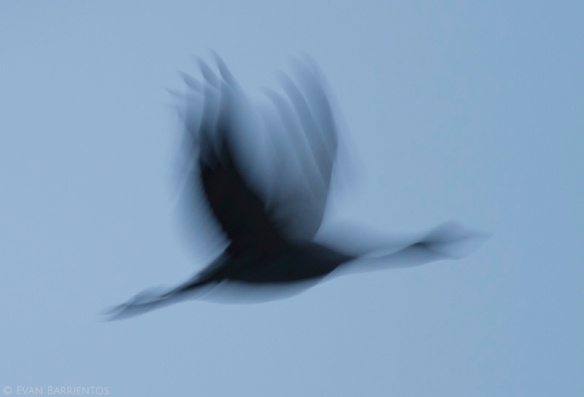 Now, to answer my original question: why take these photos and videos? Ultimately, I hope that I’ve given people who only get to see the cranes once in a crowded blind, and people who never see them at all, an intimate look at this amazing phenomenon. Even in a spectacle like this, it still takes time and a careful eye to appreciate the full beauty. This was also an important experience for myself as a photographer. I practiced the important steps of getting to know my subject well, making multiple visits, and figuring out what images I needed to complete the story. And above all, I learned that every trip counts.