Stickleaf (Mentzelia nuda) is a common short-lived wildflower in western Nebraska.  It and other stickleaf plants are named for the dense barbed hairs on their leaves that make them sticky to touch.  This particular species of stickleaf also has beautiful showy white flowers.  Until this summer, however, I hadn’t realized those flowers aren’t open during most of the day.

Once I started paying attention, I noticed that the flowers were always closed up in the morning, and were still closed at lunchtime.  They didn’t start to open until around 3 or 4 o’clock in the afternoon.  Although it was fun to discover the blooming pattern in the field, it wasn’t a new scientific observation by any means.  Back at home, I started looking for information on Mentzelia nuda and immediately found numerous references to its evening blooming pattern.

Mentzelia nuda stays closed during much of the day.

It opens its flowers in the late afternoon and keeps them open until dusk.  Note the dense stamens in the center of the flower.

As I looked for more information on stickleaf,  I found a couple of great papers published in the 1980’s by Dr. Kathy Keeler, now a professor emeritus at the University of Nebraska-Lincoln.  Dr. Keeler did some really interesting natural history research on Mentzelia nuda  and published it in the American Journal of Botany (1981, 68:295-299; 1987, 74:785-791.)  At a basic level, she confirmed that most stickleaf plants act as biennials (they live for two years, and then bloom once and die).  A few of the plants she studied, though, germinated, bloomed and died all in one year, and others lived as rosettes of basal leaves for up to seven years before finally blooming and dying.  In other words, Mentzelia plants can adapt to conditions and either bloom in their first year if conditions allow or hold on for extra time if conditions aren’t favorable.

Dr. Keeler also reported some fascinating details about stickleaf’s strategy for producing nectar.  She found that each stickleaf flower blooms six evenings in a row before its petals drop off.  During those six days, it produces nectar at the top of its flower’s ovary.  That nectar attracts bees and flies, which Dr. Keeler observed burrowing through the thick forest of stamens to get to the nectar.  That’s all fine and good.  What’s really interesting, though, is that after the flower drops its petals, it continues to produce nectar for another 10 days.

Why would it do that?

Well, that 10 day period covers about the first half of the time required for the Mentzelia plant to make and ripen its seeds.  Dr. Keeler’s hypothesis was that the “postfloral nectar” attracts ants (predators) and helps prevent damage to the developing seeds.  Ants don’t seem to be able to find or access the nectar hidden behind the dense growth of stamens while the flower is blooming, but Dr. Keeler saw numerous ants on the flowers after the petals and stamens had dropped off.

Being a good scientist, Dr. Keeler excluded ants from some plants and found that those plants had more damaged seed capsules than plants with ants on them, supporting her hypothesis.  However, the nectar-for-protection strategy is apparently far from foolproof, because many seed capsules were still damaged by moth larvae and weevils, even when ants were present. 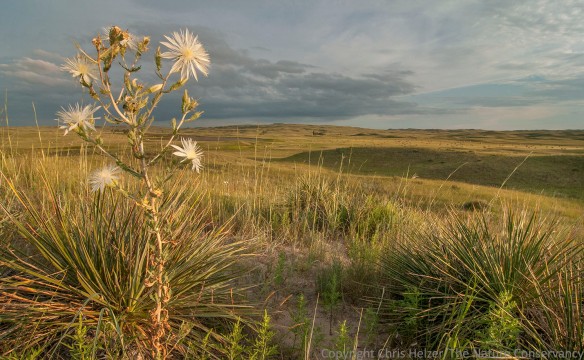 Mentzelia nuda blooming on a beautiful evening in the Nebraska Sandhills.

A few quick observations:  The details of how Mentzelia nuda interacts with the world around it are fantastically interesting.  On the other hand, so are the details of the lives of most plants and animals – or at least those that have been studied.  We only know what we know about Mentzelia’s postfloral nectar strategy because Dr. Keeler took the time – significant time – to figure it out.  That kind of research happens much less frequently these days, and that’s unfortunate.  Also, despite all of Dr. Keeler’s work, there are still plenty of unanswered about that story, including “What species of seed eaters do ants help repel?  How do the moth larvae and weevils attack the seed capsule and escape ant predation?  How has the nectar production strategy changed over time?  How/will the plant adapt in the future to counter the seed destruction by moths and weevils?”

Now, think of all the unknown stories out there related to other plants that haven’t gotten the level of attention that Dr. Keeler gave Mentzelia nuda, let alone all of the invertebrates and other tiny creatures that most of us aren’t even familiar with!  Every time I’ve gone looking for information a prairie species, one of two things happens.  Either I find incredibly interesting stories that scientists have pieced together through careful study or I find that almost nothing is known.  I’ve not yet found a prairie species with a boring story.

It’s an awesome, complex world out there.  Let’s keep learning.