I found this molting grasshopper nymph as I was walking through one of our restored prairies a couple summers ago.  Grasshoppers go through “incomplete metamorphosis” as they mature, meaning that they hatch from an egg as nymphs that look much like they will as adults – only a lot smaller.  As the nymphs grow, they have to periodically shed their old exoskeleton , which doesn’t grow with them.

Before shedding the old exoskeleton the grasshopper grows a new one underneath the old.  Once the new skin is ready, the grasshopper takes in as much air as it can to swell its body size and contracts its muscles to split the old skin along the back.  Then it squeezes itself out of its old skin and puffs itself up again to fill out its new exoskeleton.  The next several hours are a dangerous time for the newly molted nymph, because its new shell hardens slowly – making it particularly vulnerable to predators. 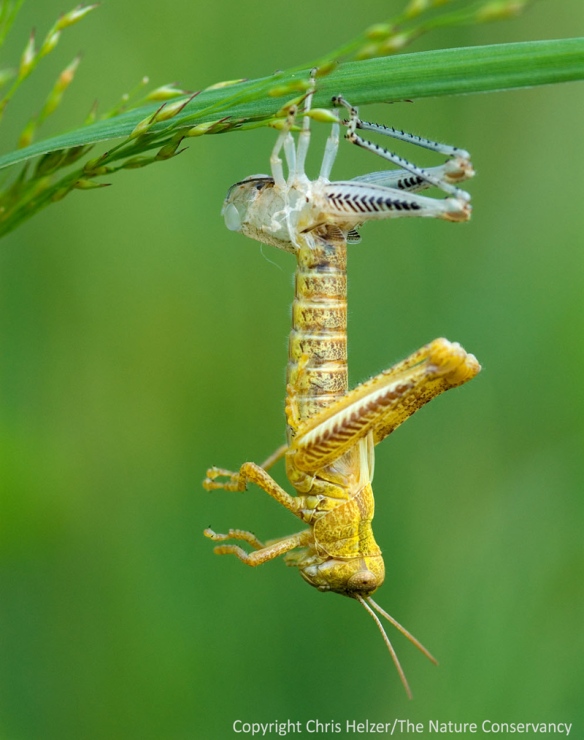 When I noticed this one emerging, I didn’t have my “good” camera with me, so I had to mark the location and run back to the truck to grab my camera and tripod.  A few minutes after I took the photo, the newly emerged nymph swung itself over to the stem of the switchgrass plant it was on (photo below) and sat there – I assume – until its new shell had hardened sufficiently that the grasshopper could go about the rest of its day. 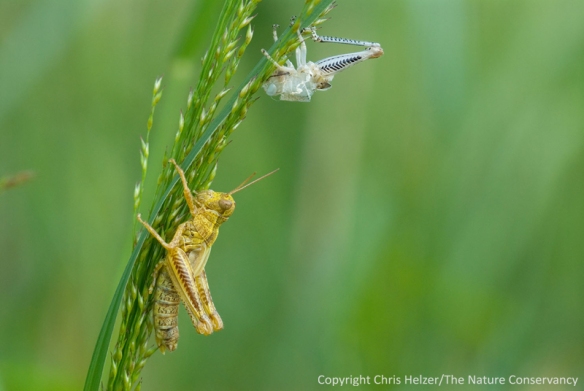