The Nature Conservancy’s Rulo Bluffs Preserve is one of the highest quality woodland/savanna habitats in Nebraska. Located at the very southeastern corner of the state, the 444 acre site has very steep topography, small prairies on the ridge tops, and some very nice herbaceous plant species diversity. The site is also located on the far western edge of the geographic distribution of many plant and animal species, including black and chinkapin oak, southern flying squirrel and timber rattlesnake (among many others). While it is a valuable ecological resource, the Rulo Bluffs Preserve also faces a number of significant challenges, including strong expansion of dogwoods in the prairies, too many smaller trees in the woodlands, and encroaching invasive species such as garlic mustard and sericea lespedeza. 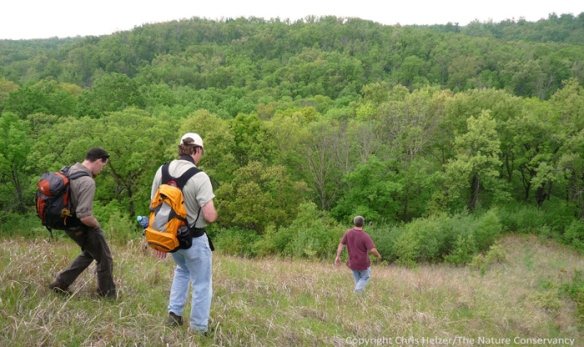 Hikers at the Rulo Bluffs Preserve walking down one of the prairie ridges toward the woodland below in early May.

Since the mid-1990’s, the Conservancy has been actively managing the site by cutting small trees and brush, controlling invasive species, and by using prescribed fire. However, the consistency of management actions has been somewhat limited by the logistical challenges associated with site’s distance from the Conservancy’s staff and facilities in Nebraska (the site is about a 4 hour drive from the nearest stewardship staff). Within the last several years, those challenges have eased because of a collaborative relationship with Northern Prairies Land Trust (NPLT) and the Nebraska Game and Parks Commission (NGPC), through which NPLT employee Kent Pfeiffer has been helping to coordinate and implement management at the site. In addition, funding has been provided from several sources (including NGPC, the Cooper Foundation, and Neal Ratzlaff) to help pay for more work to be done at the site by both Conservancy staff and contractors. Kent has helped to secure funding, coordinated most of the on-the-ground work from his nearby office, and has done significant work on the property himself. 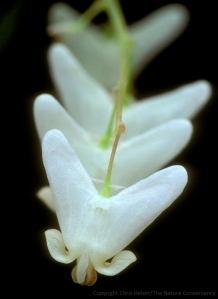 Dutchman's breeches is one of the many woodland flowers found at the Rulo Bluffs Preserve.

The latest product of all of that coordination and attention to the property was a prescribed burn last week (March 30). During the last several years, previous attempts at burning the property had been stymied by a combination of weather, logistics, and bad luck, so it had been way too long since the previous burn. Our primary objectives for the burn were to reduce the density of trees in both the woodland and prairie/savanna portions of the property and to encourage herbaceous plant diversity and vigor in the understory. We hoped to have the fire carry through the grassland areas of the property and a good portion of the woodland leaf litter – especially on south and west-facing slopes – so that we would top-kill many of the smaller trees and shrubs and remove much of the leaf litter to encourage herbaceous growth. 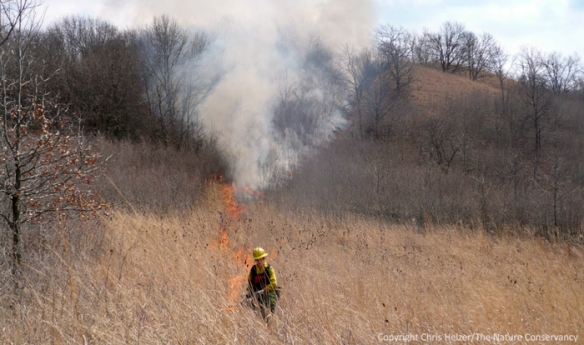 We started the fire on the tops of the prairie ridges, and let it back down the slopes.

While prescribed fire has become much more widely accepted as a tool for managing woodlands and savannas during the last couple decades, not everyone is aware of the benefits of frequent fire in those habitats. For a nice summary of the justification (with references) for using frequent fire in oak woodlands, I suggest William and Sybilla Brown’s blog post on the subject. 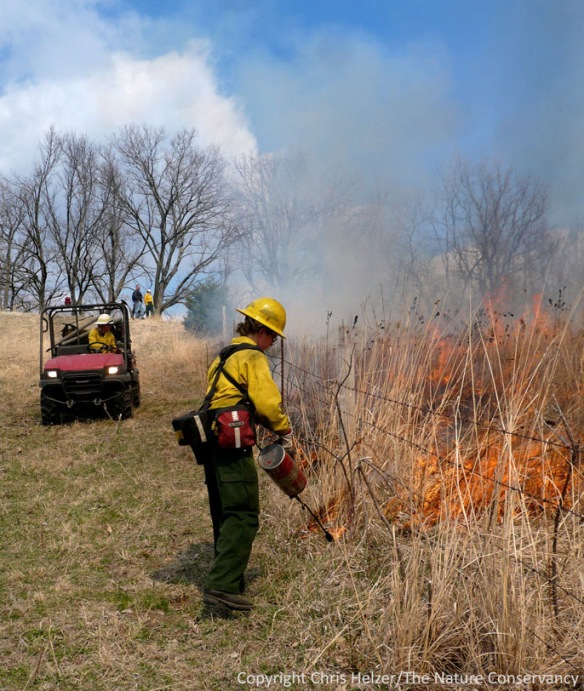 The neighbor's pasture made a nice firebreak on our west boundary, and allowed us to use a UTV to patrol at least a short section of the line. The U.S. Fish and Wildlife Service provided the UTV, three employees and other equipment to help with the fire.

We’d hoped to burn the site earlier in the spring before the herbaceous plants in the woodland started growing. As it was, the woodland floor was just starting to green up a little, but not so much that we were overly worried about the fire suppressing plant growth. More importantly, the leaf litter was dry enough to carry a fire, at least in many places. We started the fire on the prairie ridge tops and let it start backing down the hills from there. Then we lit along the creek at the bottom of the ridge and let the flames run up the hills through the woodland until they met the backing fire in the prairies. (Except that it didn’t really work that way in most places because the fuel – leaf litter – wasn’t continuous enough that the two fire lines actually met each other in many places!) Even after significant interior lighting later in the day, there were still many areas that didn’t burn. We weren’t very concerned about the patchiness of the fire because heterogeneity is a good thing, although there were a few areas we’d really hoped would burn better than they did. We hadn’t expected many of the north-facing slopes to burn well – and they didn’t – because those areas are typically more moist and shaded. 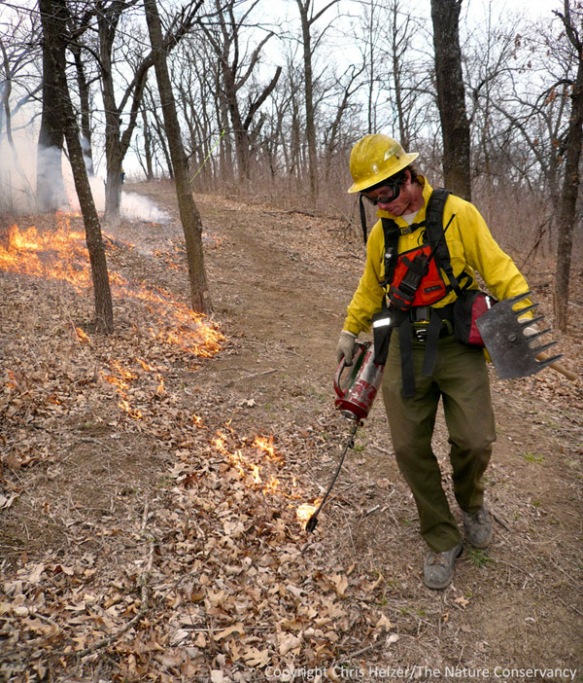 As we lit through the woodland areas, we used firebreaks created by leafblower. Because oak leaf litter fires are relatively low intensity, firebreaks can be more narrow than they are in grassland fires. 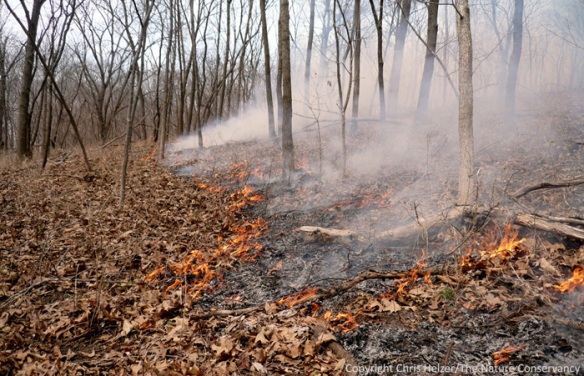 In some places, like this, the oak leaf litter was thick enough that the fire burned fairly continuously. In other places, it didn't burn at all. Draws where leaves accumulated in deep piles often burned with the highest intensity.

Ideally, we will be conducting this kind of burn annually for the foreseeable future. While this seems counter to some of my earlier blog posts (e.g. the one about “calendar prairies“) on the importance of not using repetitive management treatments, the patchy nature of woodland burns means that every year’s burn pattern will be different. In addition, I’m viewing this as a restoration project because we’re trying to move the habitat in a fairly linear direction to a more open state (fewer trees and shrubs in the understory). When we get it closer to where we want it, we may back off on the fire frequency somewhat (or maybe we won’t). 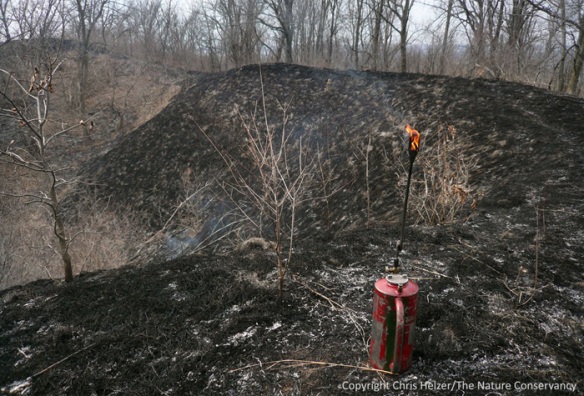 This photo shows the steepness of the topography at the preserve. We're hoping to suppress the encroaching dogwood trees by a combination of frequent fire and targeted herbicide treatment. 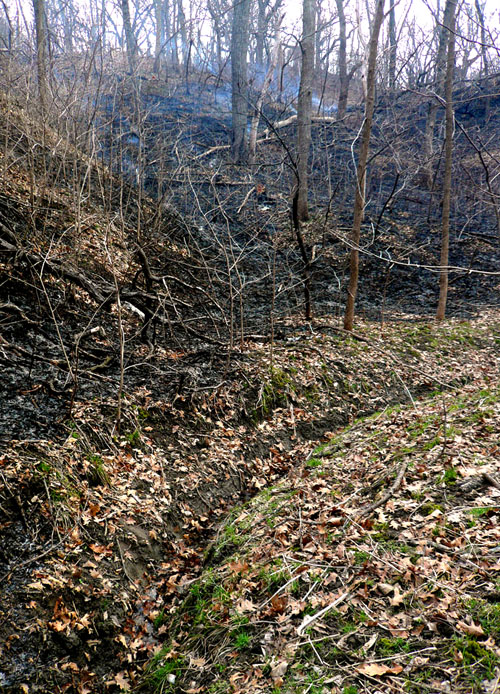 We used the small creek at the bottom of the valley as a firebreak. The moist soil helped keep fire intensity low along the creek. 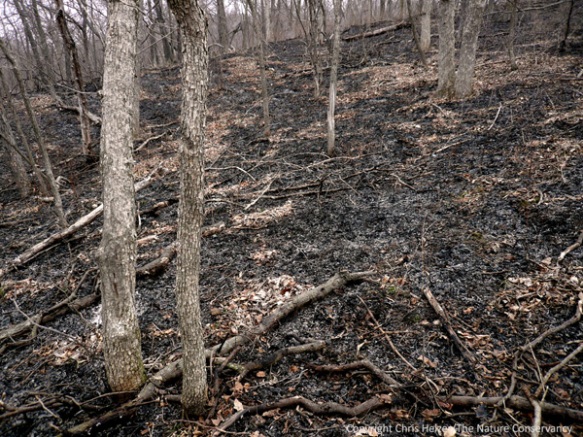 While most of the woodland burned only in patches, some woodland areas, like this one, burned fairly completely - but even here, patches of unburned leaves can still be seen. 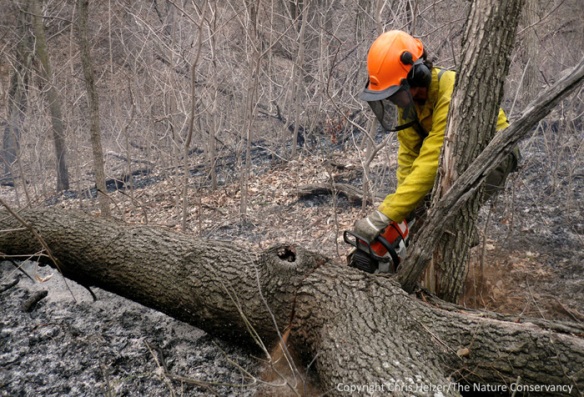 The day after the fire was spent doing mop around the edges of the burn. Here, one of our crew is cutting the burning end off of a log. The burning portion was then pushed/rolled away from the edge and allowed to burn itself out.

This summer or fall we’ll be supplementing the impacts of prescribed fire by having a contractor come in to do some significant thinning of some portions of the woodland – removing trees under 7 inches in diameter. We’re hoping that the thinning will speed up the restoration process and that it won’t cause unforeseen invasive species issues, but we’ll be prepared for both scenarios!

In the meantime, I’m going to be sure to make the 4 hour drive down to the Rulo Bluffs Preserve in a few weeks to enjoy the wildflowers and warblers, and see how many little trees we knocked back with the fire.  If you’re in the neighborhood, feel free to do the same!