Last week was the annual workshop of the Grassland Restoration Network.  This year, the host was The Nature Conservancy’s Kankakee Sands Prairie/Wetland Restoration Project in Indiana.    There were more than 80 people – mainly from Illinois and Indiana this year.  As always, the workshop was an opportunity for sharing notes and ideas on prairie restoration, but we also had a particular focus on animal habitat this year.

I felt like the workshop was especially productive and interesting this year, and have several posts worth of information to share from it, but I thought I would start with herpetology.  Kankakee Sands is restoring wetland habitat by plugging/filling ditches and also doing some excavation – and then seeding wetland vegetation.  One of the goals of that work is to create habitat for reptiles and amphibians.

Dr. Bob Brodman, from nearby St. Joseph’s College, has been sampling amphibians (and reptiles) in the area since before restoration work began, and has observed exponential increases in populations at the restoration site.  It’s not really surprising that he’s found higher numbers of amphibian populations, since the Conservancy has added new wetlands to the site.  More interesting – and gratifying – is that he’s also finding that the number of amphibian species per wetland is also increasing (as is the total number of amphibian species across the site).  In addition, Dr. Brodman has collected data on other amphibians and reptiles that seem to show those species moving in from nearby remnant habitats.  Since the major goal of the Kankakee Sands project is to reconnect those disjunct remnant habitats (for vertebrates, invertebrates, and plants) those data are encouraging.

Restoration ecologist Ted Anchor led field trips for this year’s network participants to show the immediate colonization of newly-created wetlands.  We looked at two wetlands – one with muck soils and one with almost pure sandy soils.  At both wetlands, we saw numerous frogs and toads, though they were much easier to see (and catch) at the more sparsely-vegetated sandy site.  Additionally, we were finding both Fowler’s toads and American toads, as well as many that appeared to be hybrids between the two species.  Dr. Brodman hypothesized that the temperature and moisture conditions this spring had led to the two populations breeding simultaneously in ponds where they would normally show up a couple of weeks apart. 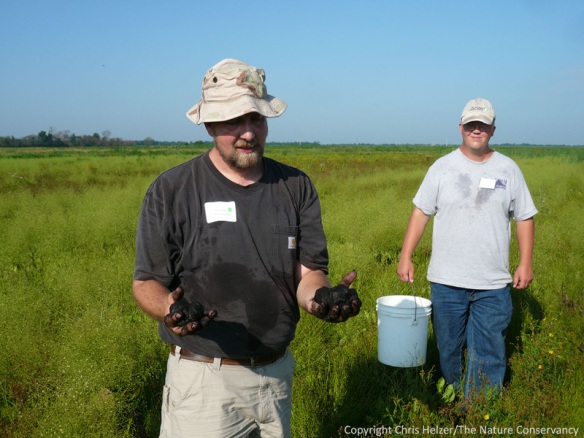 Ted Anchor showing off the muck soils at one of the wetlands on the field trip. The muck had prevented the immediate area from being farmed, and also created a quick establishment of plants from the seed bank - and from seeding - after excavation was complete. 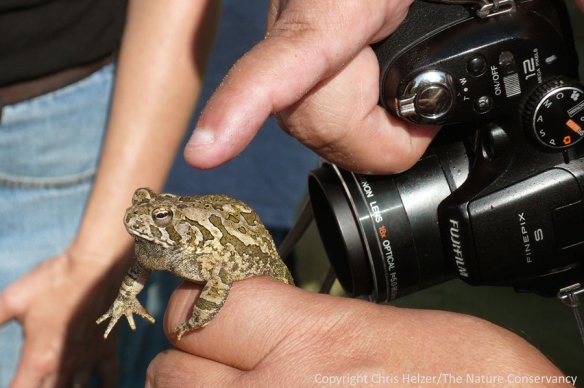 One of many toads that had physical characteristics of both Fowler's and American toads.

Ted and Dr. Brodman both discussed some of the important factors to consider when restoring wetland habitat for frogs and toads.  In general, they said that most amphibians utilize a buffer zone of upland habitat (about 200 meters wide) around the actual wetland habitat itself.  While that habitat is very important, the most critical factor for annual breeding success tends to be the length of time water is present in wetlands each spring/summer because that determines whether breeding occurs and whether tadpoles can successfully mature before their ponds dry up.  Water depth and organic matter in the wetlands soils can both affect the length of time that water stays around.

Creating wetlands with varying depths, including at least a few places where it is nearly permanent can help ensure breeding success (though fish and bullfrog populations can be counter-productive, so that can be a tricky line to walk).  Most wetland restorations at Kankakee Sands have very sandy bottoms – as do the ones we’ve done along the Platte River in Nebraska.  Those sites tend to hold water for shorter times than do sites with more organic matter (or clay).  That organic matter will accumulate over time, gradually helping to increase breeding success over time, but again, creating some deeper pools can help in the meantime.

In addition to helping hold water, organic matter may have two other benefits.  First, the darker colored soil may improve the effectiveness of the dark-colored tadpoles’ camouflage – and could increase survival (logical speculation from Dr. Brodman).   Second, the organic matter increases the density of vegetation, which may help amphibians better thermoregulate and conserve moisture under the shade of those plants.  Those plants probably provide more and better hiding places too… 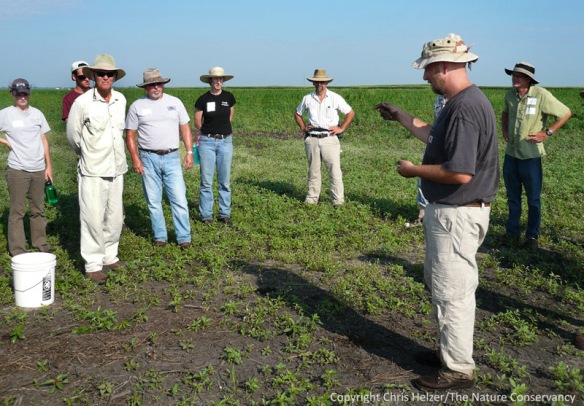 Ted Anchor and network participants at the sandier of the two wetlands visited on the herpetology field trip. You can see the sparse vegetation in the sandy soils.

At our Platte River Prairies, we’ve experimented with trying to supplement organic matter levels in our restored wetlands by “top-dressing” excavated wetland bottoms (spreading top soil on them).  While it likely increases organic matter, the main impact we’ve seen so far is an increase in invasive plants – and/or lower plant diversity.  It may be that waiting for those wetlands to accumulate organic matter slowly will allow a more diverse plant community to take hold – but may mean lower breeding success for amphibians and other species in the meantime.

A final discussion topic during our wetland field trips centered on habitat structure for shorebirds – as well as amphibians and other species – as restored wetlands mature over time.  Obviously, the bare sand (or sparse vegetation) conditions immediately after wetland construction provide great habitat for shorebirds.  As that plant community develops over time, a few dominant plant species often end up covering much of the area, reducing bare ground, decreasing plant diversity and somewhat simplifying habitat structure.  We had an interesting set up discussions about whether (or how often) it was valuable to periodically “reset” those early conditions through intensive disturbances such as grazing or disking – and there was no consensus among the group.

We’ve experimented with periodic intensive grazing at our Platte River sites to create bare ground in and around the deeper portions of our restored wetlands.  Within a year or two after the cattle have moved to another location, those wetland plant communities recover their former plant composition and habitat structure.  We’ve found that kind of grazing to be useful in preventing species like cattails from choking out open water habitat – and in creating temporary habitat for shorebirds and other species that like bare ground.  On the other hand, there are certainly impacts from the cattle in terms of nutrient inputs and sedimentation.  I don’t have the answers about how to balance those tradeoffs.  At this point, we’re banking on the ability of our sites to absorb the potential negative impacts – on a short term periodic basis – and we appreciate the apparent benefits.

It was great to have the opportunity to see what the Conservancy’s 6,000 acres of restored grassland/wetland habitat is doing for reptiles and amphibians in Indiana last week.  As I’ve mentioned before, I find it valuable to think about my own restoration work through the eyes of various animal and plant species.  I admit that toads aren’t one of the species I consider very frequently, so it was helpful to be reminded of the importance of those species and the types of conditions they require.  As I walk our sites this week, I’ll be looking at our wetlands with a different perspective than I would have last week.