This fall, we completed (mostly) a wetland restoration project I’ve been trying to finish for more than a decade.  A beautiful clearwater meandering stream runs through our Platte River Prairies south of Wood River, Nebraska.  At one point, however, the stream enters the remnants of a sand and gravel mining operation from early last century.  What was left after the gravel extraction was a long lake with big piles of spoil sand all around it.  Before our restoration project began, the stream dumped into one end of the lake and flowed out the other.  While the lake had good fishing in it, it didn’t meet some of our real objectives for the site, including shallow wetland plant communities, and habitat for migratory birds, freshwater mussels, and other wetland animals.

In 2001, in partnership with the US Fish and Wildlife Service’s Partners for Wildlife Program and Ducks Unlimited, we restored the west half of the lake to a meandering stream channel and backwater wetlands.  The west half was the easy and cheap half because the lake was relatively shallow (6 feet and less) and there were big piles of sand right along the edge.  The project essentially consisted of pushing those sand piles into the lake with a bulldozer and using an excavator to create new stream channels.

The results of that initial effort were encouraging.  We had excellent establishment of wetland and wet meadow plants from our seeding after the construction was done, and the area is heavily used by many wetland wildlife species, including shorebirds and waterfowl, river otters, beaver, muskrats, and many others.

A photo of a backwater wetland within the west half of our sandpit restoration, ten years after construction and seeding. The water is no deeper than about 2 feet in any location.

Unfortunately, the relatively higher cost of restoring the second half of the lake (the wider and deeper portion) kept us from completing the rest of the project until this fall.  Once again, our partners were the Fish and Wildlife Service and Ducks Unlimited.  This time, the restoration process was essentially the same as the first phase, except that much of the sand to fill in the deeper portion of the lake had to be hauled from further away (from along the edges of what we’d restored earlier).  We recreated several stream channels and adjacent wetlands, and – except for a few finishing touches and one little issue – the site is done and ready for seed.

The right side of his photo shows a portion of the west (first) half of the project, completed in 2001. On the left, we pulled sand from piles that were still remaining after that 2001 phase, and hauled it to the east to help fill in the deeper portions of the lake this year.

Jonas Davis (left) and Andrew Rieschick (right) with Ducks Unlimited inspect a portion of the new construction, including a nearly-completed shallow stream channel that was designed to function as a wetland slough in low water, and carry streamflow under high water conditions.

This panoramic of the nearly-completed east half of the project consists of multiple images stitched together.

Unfortunately, it turns out that when you fill a lake with sand, the organic matter on the bottom of that lake gets displaced by the fill sand, rather than just covered up by it.  Eventually, when the lake is nearly full of sand, that organic matter becomes concentrated in the little sliver of lake that is yet to be filled in.  The consistency of that saturated, gooey organic matter (sludge) is essentially the same as mucky quicksand.  Oh, and it smells pretty bad too. 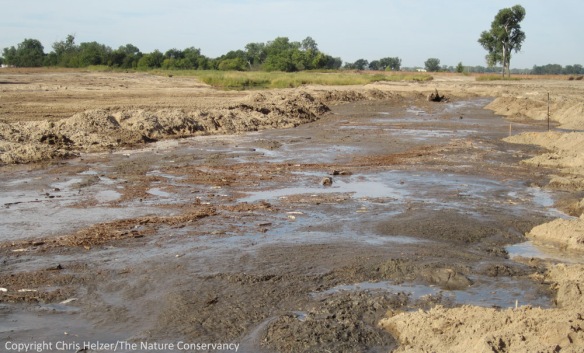 Here's what the sludge looked like when we were nearly done filling the east lake. It was essentially a long trench, filled with slimy, goopy sludge - up to 8 or 10 feet deep. It'd make a great castle moat, but isn't really what we wanted (or safe) for a wetland.

Dealing with this kind of sludge when filling small irrigation pits and other small bodies of water is commonplace for wetland restoration folks (I’m told) but no one around here has ever seen the volume of sludge that we now have at our restoration site.  Lucky us!  So what do we do now?

We didn’t feel like we could leave the sludge in place, mainly because there are clearly some safety risks involved with leaving a long channel filled with 10 feet of quicksand-like sludge in the middle of a wetland restoration project.  Our immediate solution was to use an excavator to remove the sludge and a bulldozer to spread it out over a large area of the adjacent low-lying sandy soil.  We hoped it would dry out enough we could then deal with it in some way.  At the present time, we have an acre or two of 8-12 inch deep goop on top of sand along one edge of our new stream channel. 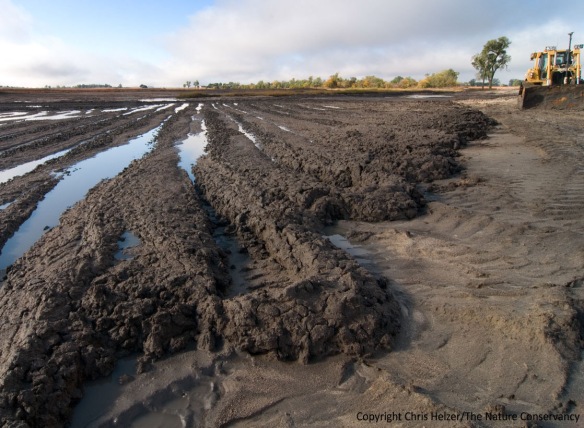 Here's what the sludge looked like right after it was spread out. It covers about 2 acres of the land adjacent to the new stream channel. It's dried out more since then, but is still wet on the bottom. Anyone want to buy some goo?

So, now what?  After considerable discussion, we figure we have at least two choices:

1.) Leave the sludge in place, disk it smooth after it dries sufficiently (it’s getting fairly dry already) and broadcast wetland and wet prairie seed over the top.  One big question about this option is whether or not plants can grow in that organic matter – not knowing what kind of nitrogen concentration (or other chemical issues) we might have to deal with.  The second, more important question, is what the long term consistency of that organic matter will be like, assuming plants grow in it.  The sludge is sitting on sand that will be frequently flooded whenever the stream rises or groundwater comes up during wet seasons.  Thus, the sludge – though drying now – will resaturate fairly frequently.  Will it always be a sloppy mess that people and animals will struggle to walk through?  Or will the roots of the newly established plants mesh together sufficiently that they will “stabilize” the area fairly well?

2.) Remove at least some/most of the sludge and haul it somewhere else.  We could then disk the remaining organic matter into the sand and seed it – with confidence that we could establish a good wet prairie/wetland plant community on the site.  There are several options for how we could remove and haul the material.  We also have a few options for where to take it – including a neighboring farmer, who would be happy to incorporate it into his sandy cropfield…as long as he doesn’t have to pay for it.

Unfortunately, removing the material is a little logistically complicated (we’d need a track loader that could move through the existing sludge and wet sand without getting stuck, trucks that could haul the material – potentially big manure spreader/dump trucks, and something to spread out and/or incorporate the material at its new location.)  It’s also heavy on cost, and we’re a little light on cash.

This is where you, helpful reader, come in.  I’m hoping that among the wide array of people who read this blog, or to whom this particular post is forwarded – by helpful readers – someone has dealt with a similar situation and can give me some good advice.  I’m going to be collecting some of the organic matter this week, and will do some greenhouse trials to see if wetland seed will grow in it.  That should help answer part of the question about potentially leaving the material in place.  Beyond that, I am really at a loss.

Help and advice are welcome.  Good-natured ribbing will be grudgingly tolerated.

28 thoughts on “What Do I Do With This Sludge? A Wetland Restoration Report and Plea for Advice.”