Spiny softshell turtle. If you click on the photo to enlarge it, you might barely be able to see the little projections from the center of his nose that distinguish spiny softshells from smooth softshells.

Meet Henry.  Henry is a very small softshell turtle that spent a few days at our house in late August, 2010.  I’m not sure what Henry thought of the ordeal, but our family sure enjoyed having him.  He even went to school one day.

I found Henry along the Platte River and brought him home so my family and I could learn more about softshells – and I could get some photos.  Those of you who have followed this blog for a while will remember how I photograph small creatures like this (if you don’t remember, you can read about it here.)  Henry’s visit turned out to be a big success, at least from our standpoint, and we delivered him safely back to where I’d found him a few days later.

Spiny softshells are very good at burying themselves in sediment.

One of the things we learned was that softshells are very good at burying themselves in the sand – and they can do it amazingly quickly.  We’d be watching Henry walk along or sit and look at us, and then within about 5 seconds, he’d be gone.  It was really hard to tell how he did it – it was like he just slid into the wet sand.

Here, Henry shows off the length of his neck.

According to Dan Fogell’s excellent new field guide to the Amphibians and Reptiles of Nebraska, Henry really is a “Henry” – not a “Henrietta” because of the distinct spots on his back.  My kids, who named him (clearly) are relieved to know that.  Softshells have a smooth leathery carapace without the hard plates that are characteristic of most other turtles.  According to Fogell, they eat mainly small invertebrates, but will also scavenge on dead fish and even eat vegetable matter at times.  During  his short stay with us, Henry didn’t eat any of the offerings from my kids. 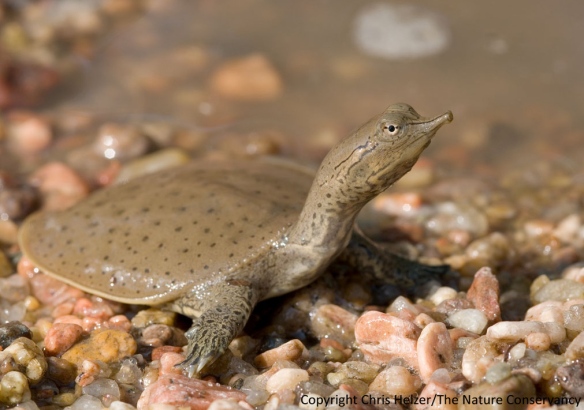 Although I’m not a big fan of people taking animals out of nature, I do think there can be great value in employing them as ambassadors in certain circumstances.  I hope Henry recovered from his time with us, and is living a normal life in the river now.  My kids will certainly never forget the experience, and still talk about Henry fairly often.  Whenever we go to the river, we keep our eyes out for him – and his colleagues – and it’s hard to wonder how many softshells are watching us from their submerged hiding places as we walk around.  Because they were able to form a “relationship” with one of the inhabitants of the river, my kids now see that river differently.  Rather than water flowing through sand, it’s a place where creatures like Henry live.  From a conservation standpoint, that’s a pretty important distinction that I’d like everyone to make.