I finally broke down and bought a close-up flash system for my camera.  Until now, I’ve just relied on natural light to illuminate the flowers, insects, and prairies I photograph.  However, during the last couple years, I’ve been weakening, and looking at recent images from people like Clay Bolt and Piotr Naskrecki finally pushed me over the edge.  After considerable wandering about in the world of internet photography websites and equipment reviews, I am now the owner of a Nikon R1 Wireless Close-up Speedlight Kit. (Say THAT five times fast!)

Here’s my next problem:  Now that I’ve got a flash system to help me get better close-up insect photos, where am I supposed to find an insect to photograph during the middle of February in Nebraska??

A boxelder bug captured on my front porch and photographed in my kitchen.

I’m sure I’m not the only one who has been seeing boxelder bugs around their house this winter.  It seems there are always a couple of them nearby – soaking up some sun by the window or reading over my shoulder at my desk.  Sure enough, as soon as I got the new flash assembly hooked up and ready to test, I was able to find one boxelder bug in the kitchen and another out on the front porch.  (You can tell which is which in the photos because the bug from outside is covered in dust.)

The other boxelder bug – less dusty – that I found in my kitchen.

Boxelder bugs are considered by many people to be pests, but that’s not a completely fair characterization.  Sure, they suck the juices out of leaves and the developing seeds of boxelder and maple trees, but they don’t siphon enough out to actually hurt the trees.  Yes, they can congregate in large numbers on the sunny sides of houses, but they’re not doing any actual damage there.  Also, while they are happy to spend the winter in cozy crevices around your house, they don’t eat anything during that time, and can make themselves available on short notice should you have the urge to try some wintertime insect photography in your kitchen.

As the photo shoot went on, the boxelder bugs and I got more creative in our portrait compositions.  (Also, this one didn’t want to hold still.)

The species of boxelder bug in my neighborhood is the Eastern Boxelder Bug (Boisea trivittata), which is found throughout most of the United States east of the Rocky Mountains, as well as in some western states, parts of southern Canada, and even Central America.  Boxelder bugs are “true bugs”, meaning they are members of the taxonomic order Hemiptera, along with other bugs such as stink bugs, plant bugs, cicadas, and many other insects that have piercing/sucking mouth parts.  Like many other true bugs, boxelder bugs also have a characteristic triangle between the tops of their wings (as opposed to beetles, in the order Coloeptera, which have hardened forewings that form a hard shell on their back when they’re not flying.) 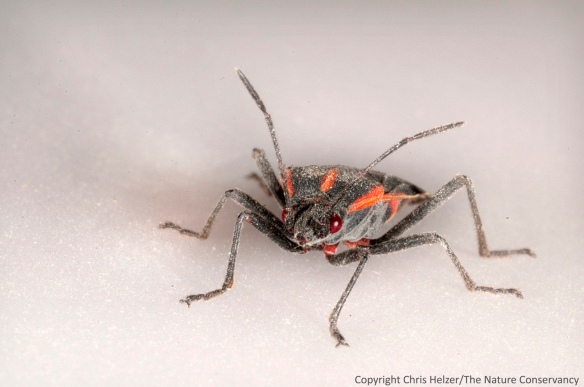 They’re even cuter from the front, aren’t they?

One of the endearing qualities of boxelder bugs is that they can release bad-smelling/tasting chemicals to discourage predators.  Like many other insects with similar capabilities (monarch butterflies and long-horned milkweed beetles, for example), they have bright orange or red markings to warn predators off.  That defense mechanism may be why boxelder bugs feel comfortable hanging around – often in large crowds – in plain sight, while most other insects work hard to stay hidden.

Last shot.  Note the small eyes behind each of the main eyes.  Those smaller eyes are ocelli, or simple eyes, that (we think) can discriminate only between light and dark.  Their function is still a topic of debate among entomologists.

I understand that many of you won’t ever become fans of boxelder bugs.  I guess I can live with that, and – with the exception of those you squish – so can the boxelder bugs.  Personally, I like them.  As with every other insect species I know of, they have an fascinating life story, and they’re just trying to make their way through life like the rest of us.

Plus, they make very accomodating photo subjects in the dead of winter.

Photography notes for those of you who care…  These photos were all taken with the “standard” set-up of the R1 system, with two speedlight flashes, mounted at “9 and 3” at the front of my Nikon 105mm macro lens.  I had an 8mm extension tube on for all but the second photo shown here.  The bugs were photographed walking around on the white plastic (acrylic?) diffuser that came with the flash system.  All these shots were hand-held at 1/250 sec exposures.  I’m looking forward to using this flash system outside, so I can capture images of insects, flowers, and other small things when the available natural light isn’t quite as good as I might want.  We’ll see how that goes.