While at the Niobrara Valley Preserve last week, I hiked around in the former pine savanna on the bluffs north of the river.  I’ve always enjoyed the patterns found in the bark of ponderosa pine trees, especially after a fire.  Because of the big 2012 wildfire that swept across the Niobrara Valley Preserve, we have thousands of dead ponderosa pines, and (among other things) that means lots of great bark patterns.

Not only are pine bark patterns interesting to look at, it’s also fun to try to find images of familiar objects in them.  It’s a little like cloud watching, but instead of gazing dreamily into the sky, you stare at dead burned trees.  It’s probably not for everyone, but one perk is that you don’t get a crick in your neck while doing it.

I didn’t see any particular picture in the first photo shown here, but I did in the next two.  I’m curious to know if any of you see what I see, or if you see something completely different.

So far, people have seen a giraffe, a scorpion, and a happy turkey in this one…

This one brings to mind a couple different Looney Tunes cartoons for me.

It’s probably a good thing I don’t live at the Niobrara Valley Preserve.  Among all the other things that would distract me from getting work done, I might spend too much time just wandering around looking for pictures in tree bark…

Carolina anemone, aka windflower (Anemone caroliniana), is one of my favorite spring wildflowers.  Like many early bloomers, it’s beautiful but inconspicuous.  Despite its gorgeous flower color(s), it can be really hard to see unless you’re within a few feet of it.

The tiny, but beautiful windflower (Anemone caroliniana).  It’s hard to enough to find it when it is blooming.  When it’s not, the leaves (foreground) are so small and inconspicuous, they are nearly impossible to spot.

Earlier this week, the Fellows, Nelson, and I spent a couple hours hiking our Platte River Prairies, practicing some plant identification and talking ecology and management.   I’d mentioned the anemone as a species we might see if we were lucky, but we didn’t find it.  After our hike but before I headed home, I decided to revisit a hill we’d hiked earlier because I wanted to photograph some groundplum (Astragalus crassicarpus) flowers there.  After I finished with the groundplum, I stood up and walked a few steps downhill, and there, not 10 feet from where the four of us had stood a few hours before, was a small patch of Carolina anemone.

There were only five plants and they were in various stages of blooming – and in various shades of blue.  I spent a few minutes photographing them and then called Evan (one of our Hubbard Fellows) in case he wanted to come see and photograph them too.  Evan said something about a friendly little contest…  After describing the location to him, I drove back to town.

Last night, Evan sent me four of the images he came away with from that little patch of windflowers.  Have I mentioned that he’s an excellent photographer?  Also, he cheated by finding and photographing a crab spider on one of the flowers WHICH IS TOTALLY UNFAIR!

Anyway, without making it an overt competition, here are four photos each from Evan and me.  It’s always fun and interesting to see how different photographers interpret the same subject matter.  In this case, notwithstanding Evan’s crab spider, WHICH HE PROBABLY PLANTED, we were working with the same five flowers.  I put my four photos first, followed by his four. 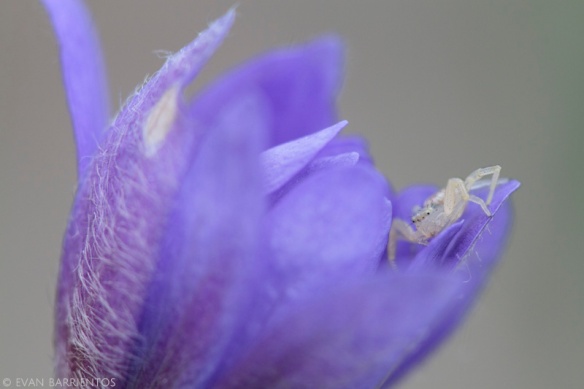 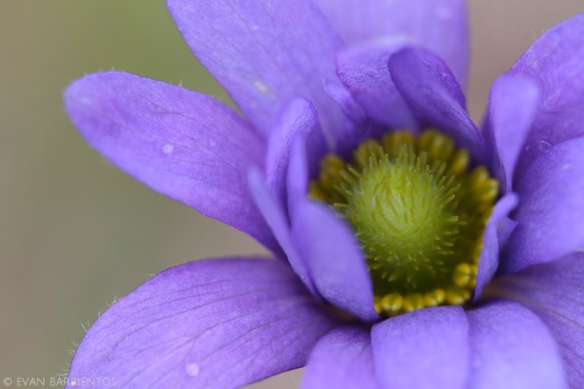 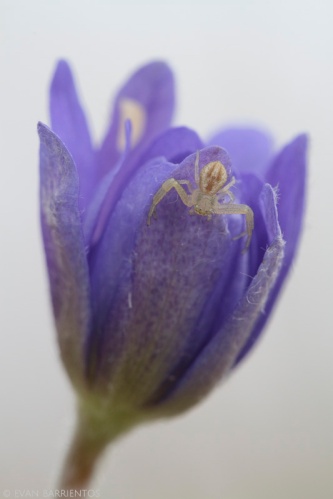 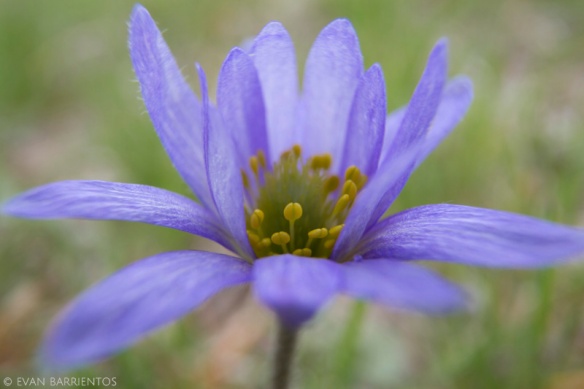 It sure is nice to be back in wildflower season again.  I’m glad to live at a latitude where we have a true winter dormant season, but part of the reason I like winter is that it increases my appreciation of the return of the growing season each year!