I’m a professional prairie ecologist.  I write a blog and have published a book on prairie ecology and management, along with lots of magazine articles.  Because of that, I’m often called a prairie expert.

Being called a prairie expert makes me somewhat uncomfortable.  I know a little bit about a lot of things, and a lot about a few things.  However, every time I learn something new, I realize how much I DON’T know about prairies. 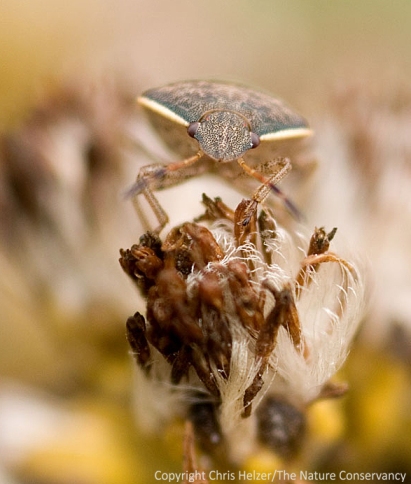 I have no idea what kind of stink bug this is.

Here are a few examples.

…why goldenrod seems to be aggressive in some places, but not others.

…what factors determine how easily snakes, shrews, and other small animals can move from one prairie to another through road ditches or other habitats.

…how to get a diverse prairie plant community to establish on a former feedlot with very high nutrient levels in the soil.

…how to identify the vast majority of insect species in prairies.

…how sandhill cranes know when the weather is nice enough on Nebraska’s Platte River to start migrating this direction each spring.

…hardly anything about soil invertebrates.

…what kind of vegetation structure grassland birds use during migration.

…whether regal fritillaries lay eggs near violets or just randomly (they don’t, apparently, lay eggs ON violets, even though that’s all their larvae feed on.)

…why some prairies become grass-dominated (and lose wildflower abundance) over time more easily than others.

…much about the relationships between soil fungi/bacteria and plant roots.

…the home range size of snakes, turtles, small mammals, or most other prairie vertebrates.

…the best way to improve the plant diversity of a degraded prairie.

…enough about how the bud banks of prairie plant species and communities respond to drought, grazing, and other disturbances.

…how deer and other wildlife species respond to patch-burn grazing or other similar fire/grazing management.

…nearly enough about parasitoids and their role in prairie ecology.

…how to identify very many stream fish or freshwater mussel species.

Unfortunately, I could go on and on.  Fortunately (hopefully?) I’m not even halfway through my career, so I’ve still got time to learn.  I’ve got research projects underway to help address a few of my “unknowns”, and trust that others are being answered by researchers and naturalists elsewhere.  The species identification skills I’m lacking can be somewhat improved over time, but I’ll have to decide which species are most important to focus on because my brain won’t handle too many.

Here I am, thinking about all things I don’t know about prairies.  The Nature Conservancy’s Niobrara Valley Preserve, Nebraska.

What’s most frustrating is the knowledge that I won’t ever learn everything I want to.  Some of what I don’t know isn’t known by anyone – we need more researchers and observant naturalists to help figure things out.  In other cases, the knowledge is out there, but I don’t have the time to go find it.  I love collecting and synthesizing knowledge, but even if I did nothing else for my whole life, I’d still come up short.

One of my greatest aspirations is to some day become an “old man of the prairie” like most of my favorite mentors.  (“Old man of the prairie”, by the way, is a term of the utmost respect.)  Much of what I’ve learned has come from following OMOTPs around and soaking up whatever information I can squeeze out of them.  Many of you have probably met an OMOTP (or OWOTP, as the case may be).  If you have, you know exactly what I’m talking about, and why I want to become one.

In the meantime, I’ve got a lot to learn…