This was an interesting week for observations.  Here are some of the things I saw and learned.

Our burn from last week is greening up nicely.  This photo was taken one week after the burn.  We’re supposed to get some rain today and through the weekend, so that should help keep the green-up going.  In a few more weeks, it’ll be difficult to tell the site had been burned.

Another photo of last week’s burn.  Most of the earliest regrowth was grass.  Wildflowers were just barely resprouting.  Cattle have access to this now, and we expect them to switch their focus from unburned portions of the prairie to this lush regrowth.

Some of you who have followed this blog for a long time may find this particularly interesting.  In general, patch-burn grazing with a light stocking rate leads to very selective grazing by cattle in our prairies – the cattle eat mostly grasses and avoid most wildflowers.  However, rosinweed (Silphium integrifolium) is one of the few wildflowers cattle often target even in unburned areas of our prairies.  One of the joys (truly) of using cattle grazing as a management tool is that I’m often surprised by what cattle do.  In this case, cattle seem to be ignoring rosinweed completely, which is very unusual.  I have some theories… 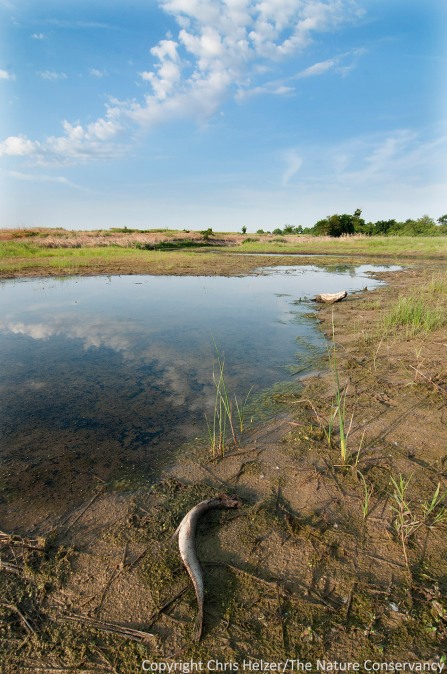 This headless and hollowed out carcass of a gar, lying along a restored wetland, was a great indication that river otters are still active along the creek where we did the restoration project.  We converted ponds into a stream with adjacent shallow wetlands, and I wondered whether we’d see a decrease in otter activity since the ponds were excellent feeding areas for the otters.  Based on some scat (poop) sightings recently and the presence of this gar, it looks like the otters are still around.

This is a photo of some remnant sand prairie, showing two species that are prominently blooming right now.  The grass in the foreground is needle-and-thread (Hesperostipa comata) and the yellow flowered plant is hairy puccoon (Lithospermum caroliniense).  Both species are present, but still in low numbers, in a restored prairie we seeded immediately to the south (see below). 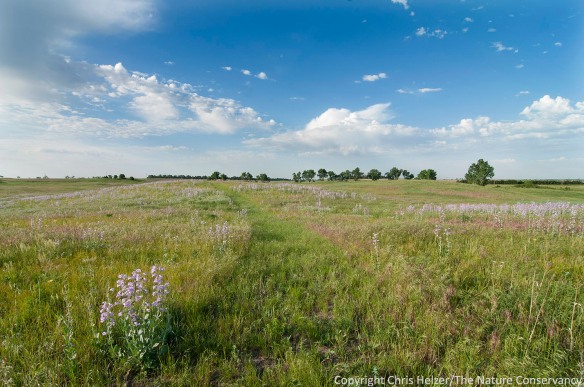 This is the photo of the restored sand prairie mentioned above.  You can see the same tree line on the horizon of both photos.  The re-seeded prairie has most of the same plant species, but often at different levels of abundance.  The shell-leaf penstemon (Penstemon grandiflorus) shown here is an obvious example of that.  As I’ve mentioned many times before, our restoration goal is not to recreate history or mimic an existing site.  Rather we want to use restored areas to enlarge and reconnect isolated remnant prairies to increase their health and long term viability.  Having somewhat different plant species compositions in adjacent sites has advantages – especially for species such as pollinators.  Right now, many bees nesting in the remnant prairie are likely spending foraging time in the restoration, where the penstemon is providing easy and abundant food.  (A PhD student is currently trying to document that.)