The Grassland Restoration Network’s annual workshop took place a couple weeks ago in Columbia, Missouri.  This year’s workshop was hosted by the Missouri Department of Conservation and included more than 90 people from around the country.  As always, the meeting was a mixture of presentations, discussions, and field tours, and was informal enough that we had plenty of time to get to know each other and catch up on what everyone has been learning at their own sites.  There were too many topics and discussions from the workshop to cover in a single blog post, so I’ll spread them out over the next several weeks or months.

One of the most intriguing discussions of the workshop was an extended conversation during our field trip to the 711 acre Prairie Fork Conservation Area, managed by Missouri Department of Conservation (MDC).  At several points during the trip, we talked about objectives for restoration projects and prairie plantings.  Here in the Platte River Prairies, our restoration objective is to use prairie plantings to enlarge and reconnect fragmented remnant prairies – hoping to increase overall ecological resilience and the viability of populations of plants, bees, etc.  At Prairie Fork, however, there are no remnant prairies to stitch together, and education is a major focus of their restoration project.  Their stated restoration goal is simply to rebuild natural communities and their processes.  Then they use those restored areas as platforms for their education work.

Although Prairie Fork Conservation Area is not far from Tucker Prairie – the last remnant of the once vast Grand Prairie that stretched across a large swath of Missouri – MDC staff are not trying to design their plantings to mimic Tucker Prairie.  Instead, they are harvesting seed from Tucker prairie and other small scattered areas of native prairie vegetation to create seed mixtures that are a composite of all of those sites.  As a result, prairie plantings are allowed to develop into communities as local site conditions allow – a very sensible approach.

Rattlesnake master is common at Tucker Prairie, the last sizeable remnant of the Grand Prairie that used to cover a large portion of northern Missouri.

The decision not to impose constraints on what each Prairie Fork planting needs to look like gives MDC considerable freedom in terms of evaluating success.  That freedom led to some great discussions about what success should/could look like.  There were three tour stops where the topic came up in some form, and each is worth discussing.

1. The first discussion occurred early in the tour when we were looking at a soybean field that was going to be converted to prairie vegetation within the next few years.  Around the edge of the field were “waste areas” of tall fescue with infestations of sericea lespedeza, autumn olive, and other invasive plants and trees.  Because of the trees and topography, it wasn’t feasible to put those areas into cultivation, which is the technique MDC (and most of us) would prefer as a way to create a clean seed bed prior to planting prairie.  The group starting talking about other ways those areas might be prepared for planting, until Bill Kleiman (with The Nature Conservancy’s Nachusa Grasslands in Illinois) abruptly shifted the discussion.

Bill made the excellent point that those difficult areas wouldn’t necessarily have to be converted to a diverse prairie planting, and that attempting to do so might prove to be overwhelmingly time consuming or simply impossible.  The seedbank of invasives in those areas is probably heavy enough that even multiple years of cultivation might still result in long-term fights with invasive plants emerging from that seedbank long after prairie vegetation was planted.  Instead, Bill suggested, why not implement an annual program of broadcast herbicide spraying in those waste areas – with the simple goal of maintaining them as a low diversity, grass-dominated, plant communities that won’t threaten nearby diverse plantings?  In other words, rather than trying to make those areas perfect, just make them harmless.  Down the road, when everything else is restored, MDC can always come back and spend energy trying to convert them to something diverse.  In the meantime, they can save a lot of time and energy by avoiding a (likely fruitless) battle to convert a very weedy area into a pretty prairie.  It was certainly an interesting proposal. 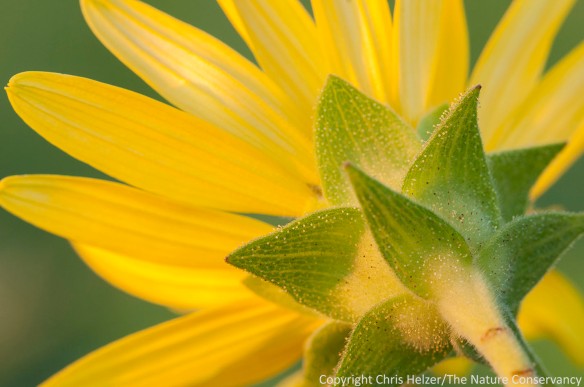 Rosinweed (Silphium integrifolium) was just beginning to bloom during the GRN workshop.

2. The next site we visited had been planted to prairie vegetation several years earlier, but had a chronic infestation of sericea lespedeza.  While MDC staff was controlling the lespedeza through spot spraying, there was enough lespedeza (and enough spraying) that the area’s plant diversity had become fairly limited and dominated by a few grass and wildflower species.  Chris Newbold, who had been in charge of the restoration work at the time the site was seeded, said that if he had to do it all again, he would have left the area in cultivation a few more years to get better control of the lespdeza population prior to planting.  The more pressing question now, though, was how to deal with the site going forward.  Options included starting over by returning it to cultivation, trying to overseed the area to establish better plant diversity, or just leaving it alone.  An additional proposal was to overseed with plant species that are resistant to a selective herbicide that controls lespedeza, allowing the site to be broadcast sprayed without eliminating all plant diversity.  I don’t think the question was resolved through our discussion, but we built upon our earlier conversation by posing the question, “Does every part of a restoration project have to be ‘perfect’ in order for the project to be successful?”

This portion of Prairie Fork Conservation Area was seeded with a high diversity mixture but has lost plant diversity , at least in part because of years of herbicide spraying for sericea lespedeza. The lespedeza is spot sprayed, but is abundant enough that herbicide impacts are evident on the plant community.  Mike Arduser, of MDC, pointed out that the site looks really nice from a bee habitat standpoint, bolstering the idea that although it had lost some of its plant diversity, it was still an important contributor to the landscape around it.

I appreciated the discussion because it forced me to reflect upon our Platte River Prairies, and areas that I wish looked better than they did.  In both my prairies and at Prairie Fork, it’s really the big picture that’s important.  Within the mosaic of natural communities that make up any sizeable prairie, it’s probably ok to have areas of low diversity vegetation.  At least at the scale of Prairie Fork, it’s really the mosaic that’s important, and variation in plant species composition between individual portions of the landscape is not only acceptable, but preferable.  Coming to terms with the idea that it’s ok to have portions of our prairies/properties that are less diverse than we think they could be is an important part of being a successful land manager.  The alternative probably entails driving ourselves to exhaustion!

3. The last site we looked at was a 2004 prairie planting that was very diverse and full of big showy wildflowers.  From an aesthetic standpoint, the planting was a big beautiful success.  I asked the MDC staff how they might judge the success of such a planting according to their objectives.  Clearly, one part of the answer is that a showy prairie is useful in terms of getting people to appreciate prairies – so that fits well into education/outreach objectives.  However, Jeff Demand, the current site manager, had another interesting perspective.  Jeff said that he appreciated the planting because it required very little maintenance.  There were no real invasive species issues to deal with, and nothing else about it that screamed out for attention.  The planting was clearly of value to wildlife, pollinators, and other prairie species, but it was particularly nice to have an area that just needed some period burning or similar management.  Especially when budgets and staffing are tight (and when are they NOT?) a site that is attractive and low maintenance can seem like heaven.

This 2004 seeding at Prairie Fork is an aesthetically-pleasing site. Most people would be very happy to have this kind of establishment success from a prairie planting.  However, aesthetics is not always the best measure of success.

There are no right or wrong answers when it comes to objectives.  Every site has its own, and they almost always change over time.  The important thing is to know what the objectives are for a particular site, and to be measuring whether or not you’re moving in the right direction.  It’s always nice to hear about other people’s objectives and measures, because it makes us re-examine our own.

I tend to worry more than I should about portions of our site that aren’t as “nice” as I think they should be.  The field trip discussion was a great reminder to sto obsessing about small areas and keep the big picture in mind.  It’s important to deal with areas that might negatively influence the surrounding landscape (e.g., by providing a foothold for invasive species that can spread into nearby areas).  Otherwise, however, variation between portions of a prairie or prairie landscape just adds to the diversity – and resilience – of the ecosystem.  I think that’s a good thing.

I guess I just have to be reminded of that now and then.