A couple years ago, I wrote about the history of our family’s prairie.  The prairie is about 110 acres (within a 160 acre farm) and is only a ten minute drive from my house.  Most of it was farmed before my grandpa bought it and planted it with six species of grass in the early 1960’s, so the plant community is not very diverse.  However, there is a lot to love about the prairie.  (Did I mention it’s only ten minutes from my house?)

Most of our prairie is old cropfield planted to grass in the 1960’s, so the forb community consists mainly of species such as stiff goldenrod and white sagewort that can colonize easily.

Some botanists would dismiss the value of my prairie because only small pockets of it were left unfarmed, and even those have only a few scattered “conservative” prairie plant species such as leadplant and prairie violets.  Those botanists, however, would be ignoring the many other contributions the prairie makes to the world and our family. 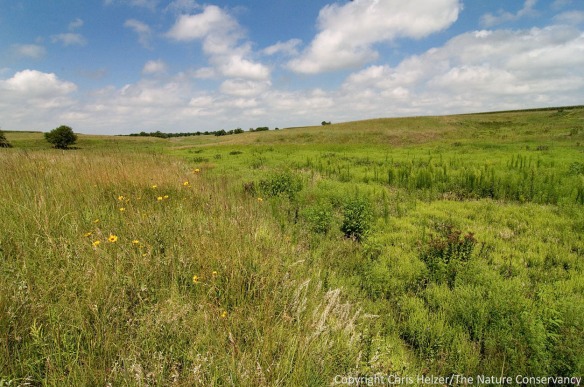 While there are a few places that were left unfarmed (foreground), much of the prairie is of low plant diversity, and the draws are dominated mainly by smooth brome.

The prairie is the only significant grassland patch within several miles in any direction, so while grassland birds and some larger insects can fly in and out each year, the prairie is a world unto itself for most of the other species that live there.  That makes the prairie both very important to those prairie species and a big responsibility for me as the owner/manager.  I try to ensure that I’m always providing a good mixture of habitat types to allow every species a chance to survive. 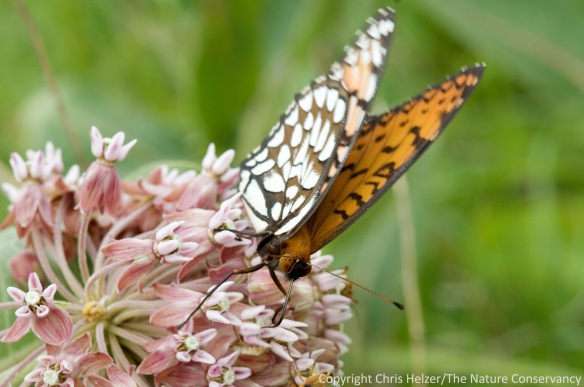 Regal fritillaries are one of many insect species we see in the prairie. There are apparently enough violets (their only larval food plant) to keep the population going.

At work, I oversee the management of prairies for The Nature Conservancy, and get to try out all kinds of crazy ideas in the name of science and in the hope of finding tricks other prairie managers might be able to use.  It’s a great job, and the freedom to play with ideas that might fail is a big perk.  Owning my own prairie, on the other hand, is a valuable dose of reality.  My prairie has to pay its own way in the world, and property taxes and bank loan payments are the same during drought years as they are in years of adequate moisture.  We graze the prairie both as a management tool and because we need the income.  I definitely adopt many of the prairie management principles I espouse as a manager at The Nature Conservancy, but the way I manage my own prairie is also very much influenced by my economic bottom line.  It’s a great way for me to stay grounded, and to be able to better think about how to translate some of my crazy ideas from the Conservancy’s land to the “real world” of private ownership.

One strategy I’ve adopted from my work at The Nature Conservancy is overseeding. I harvest my own seeds and broadcast them, using grazing to weaken competition and give them a chance to grow.  I’m starting to see some good results, including “easy” plants such as black-eyed susan and bergamot (shown here) but also more conservative plants as well.

I don’t do nearly as much monitoring of the plant and animal communities in my own prairie as I do on The Nature Conservancy’s prairies.  That said, I am trying to document the responses of the plant community to my grazing practices and weather patterns.  I make management plans each year based on both long-term and short-term objectives and adapt them based on what I see happening on the ground.  Each time I visit the prairie, I try to take some notes on what I’m seeing, both in terms of management responses and just general observations of species and ecological processes.  I can see improvements in the plant community over time, and I hope I’m also making a difference in habitat quality for the other species in the prairie, though I’m not tracking bees, ants,  or small mammals, for example, as I am at work.

I found this ring-necked snake underneath a small eastern redcedar tree I was cutting down. My kids got to see it too, which was a nice bonus. 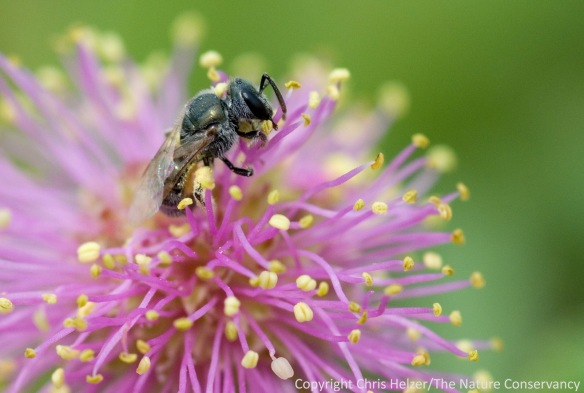 I’m not collecting data on bees at my own prairie, but I definitely pay attention to both the abundance and diversity I see each time I visit, and I take note of whether or not there is a consistent supply of nectar plants blooming across the prairie.

While I think my little prairie has fairly substantial ecological value, for all its shortcomings, I don’t measure it’s worth purely in conservation terms.  I feel very fortunate to be able to carry on the ownership and stewardship of a piece of land my grandfather bought.  Taking my kids out to their own prairie gives them, I hope, an enhanced sense of connection with the land, and a conservation ethic.  I don’t care if they grow up to be prairie ecologists, but I do want them to have an awareness of and appreciation for the natural world.  I could take them hiking or camping on other prairies (and I do) but there’s something pretty special about having a place that’s our own. 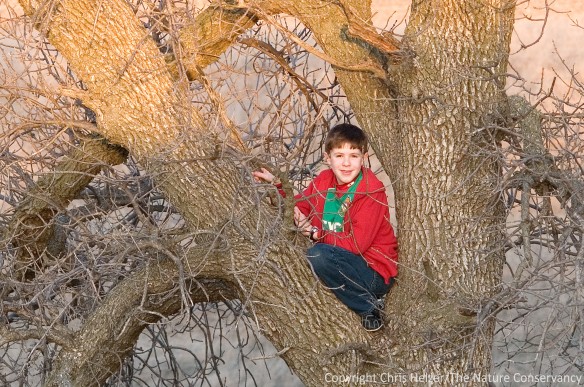 My kids like to climb trees and make forts around the property. They also dig in the mud, chase grasshoppers, and do all kinds of other kid things.

I hope that taking my kids camping at their own prairie will deepen their sense of connection with both their land and their family.

9 thoughts on “My Own Prairie, For What It’s Worth”