One of the great features of timelapse photography is the ability to compress time and see patterns or changes in the landscape we’d otherwise miss (such as daily groundwater fluctuations due to evapotranspiration).  However, another benefit of timelapse photography is simply the regular documentation of what’s happening in front of the camera.  For example, as I’ve been going through the thousands of images from the timelapse cameras on our Derr Wetland restoration project, I’ve been pleased to see a variety of wildlife species captured in those photographs.  Since we spent a lot of time and money converting this sandpit lake to shallow wetland habitat, it’s nice to see it being used.  The cameras have also captured more than just wildlife…

I thought I’d share some of the more interesting individual photographs I’ve found from the timelapse images.  These have been variously cropped to narrow in on the portion of the scene that’s most pertinent.  There are actually two cameras (set up so they can be combined into panoramic images – more on that in a later post) so don’t be confused if the scene appears to be different between photographs.

February 25, 2013.  12:06 pm.
Canada geese and mallards are among the many migratory water birds that visited the wetland. The heaviest use comes during the northward migration in late winter/early spring. 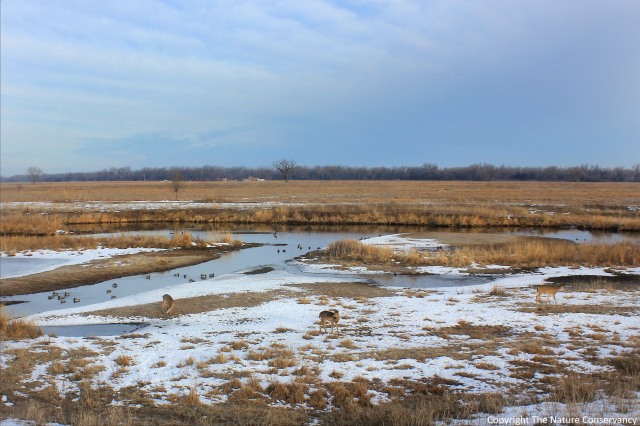 March 3, 2013.  9am.
Three white-tailed deer pass through the wetland with a group of mallards in the background. 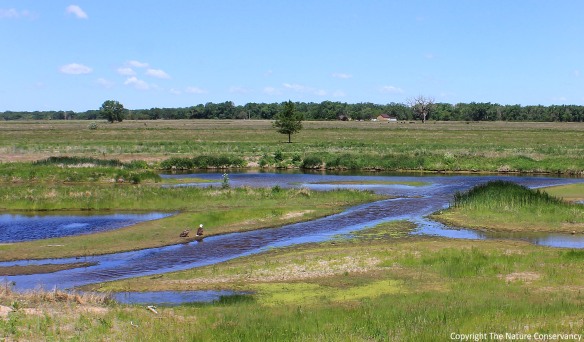 June 9, 2013. 11:36 am.
Two bald eagles, one mature and one immature, stand on the edge of the water. This may be part of the family that nested about a mile to the north of this wetland.

June 5, 2013. 9:50pm.
Great blue herons are very frequent visitors to the wetland. This one was taking advantage of the last light of the day.

June 4, 2013. 8:46 pm.
There have been a number of nice sunset photos, especially in June, when the sun is actually setting in front of this camera (which faces north/northwest).

June 15, 2013. 6:33 am.
Break out! These calves found their way out of our pasture to the south and went for an early morning exploration. They were eventually rounded up and returned.

June 13, 2013. 9:54 am.
The camera documented our land steward, Nelson Winkel, releasing Galerucella beetles to help us control the invasive purple loosestrife plants that have gained a foothold on the site. 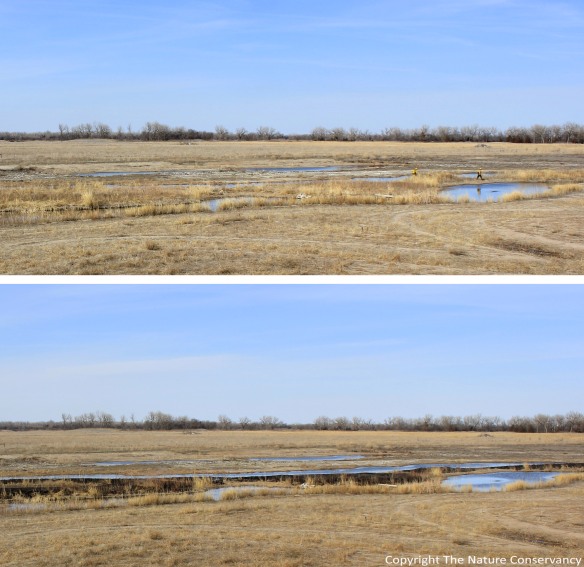 September 23, 2013. 8:27 am. Anne Stine, one of our Hubbard Fellows was working in the wetland this day. She was pulling purple loosestrife plants as we tried to remove new plants before they bloomed and set seed.

Thanks to Michael Forsberg and Jeff Dale for helping set up and maintain the twin timelapse cameras on this site, and to Steven Speicher for helping with data storage and advice.  Photos shown here were taken with Canon EOS Rebel T2i cameras with 18mm lenses.  They are inside weatherproof housings, charged by solar panels, and operated by electronic controllers designed by Jeff.  Since these cameras were installed, Mike, Jeff and others formed Moonshell Media to design and install cameras like these for others.  They are also key players in the Platte Basin Timelapse project.