When I went for a walk in the fresh snow last week, the temperature was 10 degrees below zero (F) and I didn’t expect to see much evidence of wildlife activity.  I was wrong. 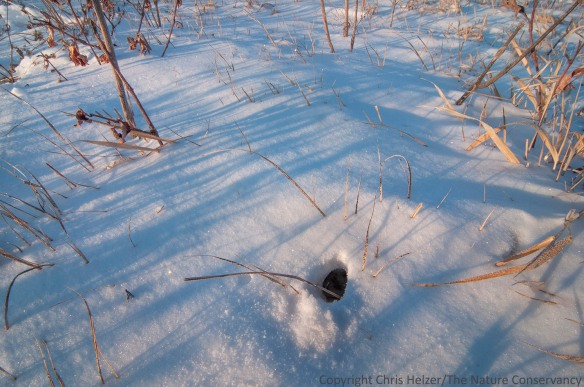 A hole in the snow gives away the location of a mouse den.  Springer Basin Waterfowl Production Area – west of Aurora, Nebraska.

I found tracks of mice scattered here and there throughout much of the wetland area I was exploring.  I looked, but didn’t see obvious evidence that the mice had been feeding – though I assume that was the point of their frigid outings.

Despite the abundance of tracks, it took me a while to find a set of tracks that I could turn into a decent photo.  The tops of the tiny snow drifts were bathed in beautiful early morning light, but were crusty enough that the mice had barely made any imprint as they crossed them.  The tracks through lower areas were nicely defined, but were in shadows deep enough that photography was difficult. 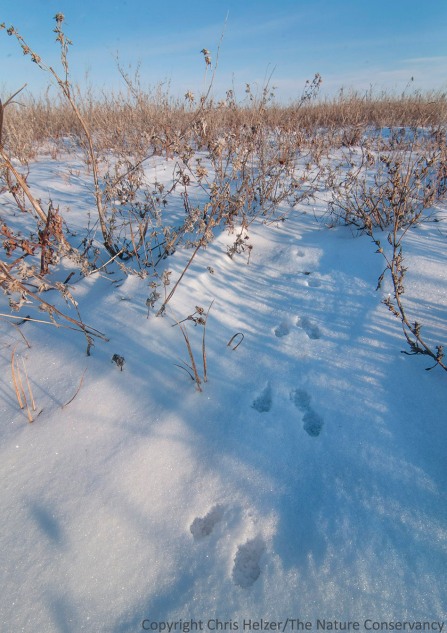 Mouse tracks in fresh snow provide evidence of activity even in temperatures well below zero.

I finally found a set of tracks I thought would work, so I flopped down on the snow and put my wide-angle lens close to the ground to take some mouse-height photos.  As I laid there, I wondered how barefooted mice managed to stay warm as they trekked across the snow in such extreme cold.  Then, without any answers, but grateful for my nice warm boots and insulated coveralls, I headed back to the truck – making nice deep tracks in the snow as I went.

…Last chance to take our survey and help us improve this blog…  click HERE to see it.  And thanks.