I have long admired the work of Stephen Packard.  His book  The Tallgrass Prairie Restoration Handbook (co-authored with Cornelia Mutel), for example, is a classic among restoration practitioners.   More importantly, he observes, reflects, and shares his thoughts in ways that influence the fields of prairie and savanna ecology in deeply meaningful ways.

In a recent blog post, Packard discusses a trip he and others took to Africa and shares thoughts about – among other things – the adjusted aesthetic required when visiting “real nature”.  The term adjusted aesthetic really resonated with me.  In his post, Stephen is referring to the way he and his fellow Illinois prairie ecologists had to get used to seeing grasslands and savannahs that were consistently and universally impacted by large numbers of grazing animals.

I often run into a similar situation when I talk to people about using grazing as a prairie management tool here in North America.  To many prairie enthusiasts, especially to the east of Nebraska, prairies and grazing don’t go together.  The idea of allowing big stompy animals to eat and crush plants just seems wrong, and the few pastures (mostly chronically overgrazed) they’ve seen bolster that opinion.  The prairie aesthetic in eastern tallgrass prairie is generally one of tall and abundant grass and blooming wildflowers.

On the flip side, ranchers I work with in the Great Plains tend to have a very different aesthetic.  To many of them, a grassland with tall plants that are producing seed is a waste.  That productivity should be put to USE!  We have a big world to feed, after all…  A pleasing-looking prairie to many Great Plains ranchers is one that is not too tall, not too short, and dominated by grasses, not “weeds”.  This is not a universally-held opinion among ranchers, of course, but common. 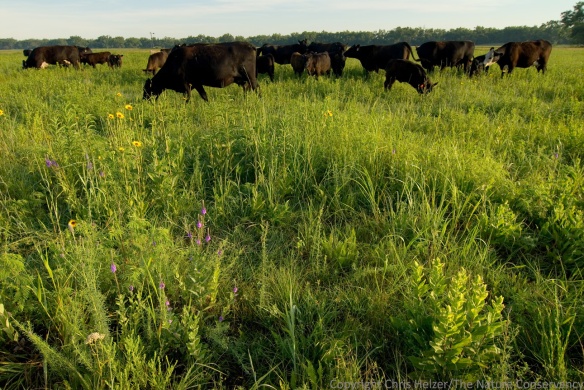 This photo is very aesthetically pleasing to me. I like the patchiness of the habitat, the floristic diversity, and the presence of grazers showing that the prairie is changing at the moment the photo was taken. However, some people will recoil at the site of cattle in a prairie, while others will see an undergrazed prairie full of weeds.

I spend a lot of time talking to both audiences (and many others) about prairies and the positive attributes of both grazing and rest.  I try to explain that plants can easily survive being stepped on and bitten off, and that there can be great value in adding large herbivores to the mix – at least in many prairies.  At the same time, I offer reminders that periodically allowing plants to produce seed heads is both good for habitat and builds vigor in those plants that can help provide stronger and more consistent productivity – especially under stressful conditions.

However, Packard’s post reminds me that it’s important to address the issues of prairie ecology and management from an aesthetic standpoint as well.  It’s one thing for us to agree on the principles of how a prairie should be managed, but if we stand and look at a prairie with very different visual desires and expectations, we’re going to have problems.

My personal prairie aesthetic is one of change and progression.  I like prairies that are DOING something, mainly because I think fits with what prairies are – dynamic ecological systems that are constantly in flux.  Prairie communities are constantly changing in response to fire, grazing, haying, rest, or weather.  Their resilience and ability to adapt to stresses both defines and preserves them. 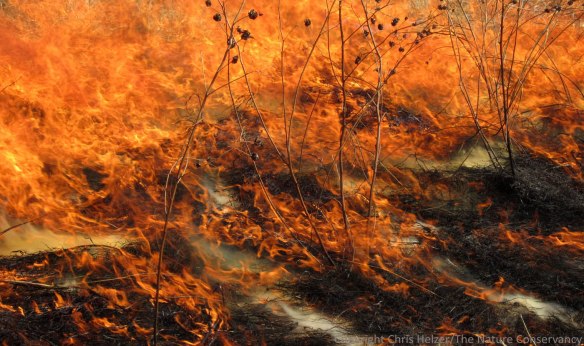 Fire is one of several major factors that propels change in prairies.

Our Platte River Prairies change in appearance pretty drastically through both time and space.  As you walk through our prairies, you can find areas that are being intensively grazed by cattle, other areas recovering from a recent bout of that kind of grazing, and still other areas that are tall and rank.  Just about everyone would be able to find something aesthetically pleasing in our prairies if they walked far enough, but many people would also find areas they thought were jarring or ugly.  If they walked the same path a year later, they’d likely see a similar mix of habitats, but in different places and with different appearances than in the previous year.

Packard’s post has stimulated me to think about how I can more effectively portray the dynamism of prairies.  Photography is obviously a major communication tool for me, but individual photographs provide only a quick snapshot (literally) of what something looks like at the time the picture was taken.  To show change, I need to use series of photos that cover long periods of time.  The timelapse cameras at our Niobrara Valley Preserve and the restored wetland in our Platte River Prairies both help with that, but I should also be taking more photos of other places through time to show how they change from season to season and year to year.

When I see this photo, I see a prairie that is responding to drought and wildfire from a year ago, and is also being affected by bison grazing. However, to people who aren’t familiar with the site and its recent history, the photo is less instructive. A series of photos over several years would help me share the change I see much more effectively. The Nature Conservancy’s Niobrara Valley Preserve.

What’s your personal prairie aesthetic?  Does it include change or is it a static image of what a prairie should look like?

20 thoughts on “An Adjusted Aesthetic and Reflections on Portraying Change”

Leave a Reply to Dave from western MN Cancel reply