While my wife Kim and I were at the Niobrara Valley Preserve for several days in December, we spotted a small creature neither of us had seen before.  We were walking along the edge of the river (hoping to see more otters, of course) and stopped to look at a small school of minnows near a patch of ice along the riverbank.  As my eyes wandered away from the minnows, I was startled to see what looked like a walking stick insect swimming slowly through the water.  Kim and I watched it for a few minutes and even pulled it out of the water to examine it briefly.  It was swimming slowly, but steadily, and seemed very at home in the water.  Up close, we could see that it wasn’t actually a walking stick, but it sure did look similar.

Later, a quick google search revealed that we’d seen a water stick-insect (genus Ranatra), also known as a water scorpion.  Water stick-insects are predatory insects that are apparently active throughout the winter.  What look like long mouth parts on the front of the insect are actually long strong front legs used for capturing and holding prey.  The long pipes extending from their tail are used for breathing. 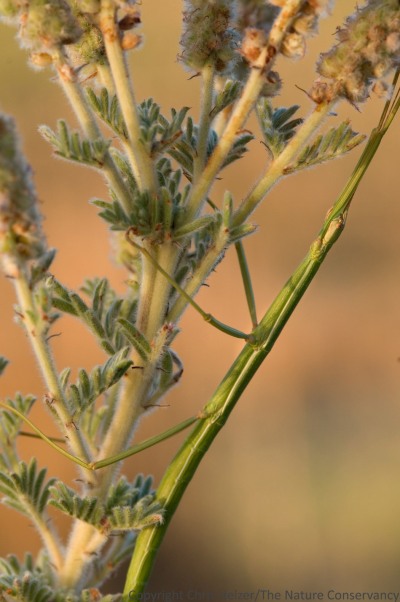 I photographed this walking stick insect about a mile from where we saw the water stick-insect.  This one is on silky prairie clover in the sandhills prairie portion of the Niobrara Valley Preserve.  Can you see how I thought the water stick might have been this instead?

While the water stick-insect does resemble the terrestrial walking stick insect in many ways, the two are not at all closely related.  They are both insects, of course, but that’s as close as they get, taxonomically.  They are not only in different insect families, but completely different insect orders as well.  In fact, they are more closely related to assassin bugs and ambush bugs, and use a similar strategy for subduing and eating their food.  All three pierce their prey with sharp beaks and inject saliva that both paralyzes and liquefies the inside of the hapless creature.  Water stick-insects feed on insects, but also tadpoles and small fish.

12 thoughts on “An Aquatic Stick Insect”