My wife and I are both biologists.  She’s a high school biology teacher and I’m a prairie ecologist.  You won’t be surprised that we think it’s important for our kids to get outside and explore nature.  However, we don’t often take the kids out with any particular agenda or curriculum in mind.  We usually just take them out.

This last weekend, we decided to spend our Sunday afternoon enjoying the pleasant weather preceding what we’re being told might be the blizzard of the century. (C’mon man, it’s just snow and wind!  Having said that, if I don’t make it through this storm alive, this will be an ironic last blog post.)  Anyway, we took Atticus (age 10) and Calvin (7) out to our family prairie for several hours.  Once there, we pretty much let the boys do what they wanted, with the exception that we kept them off the softening ice on the wetland/pond.

Atticus and Calvin displaying sticks they found at the prairie.

I didn’t watch the boys closely the whole time, but as far as I could tell, they spent about 92% of the time they were at the prairie whacking sticks against dead trees.  I’m not kidding.  Sure, they poked around the prairie and wetland a little, saw some animal tracks, found some bones, practiced getting through barbed wire fences, and played with the dogs a little.  But the majority of their experience, and what they’ll probably remember most from the day, was stick whacking.

And that’s just fine with me.  They came away from the afternoon with a positive impression of spending time in nature, and they’re excited to go back.  That’s just perfect.

Climbing on a dead tree.  With sticks. 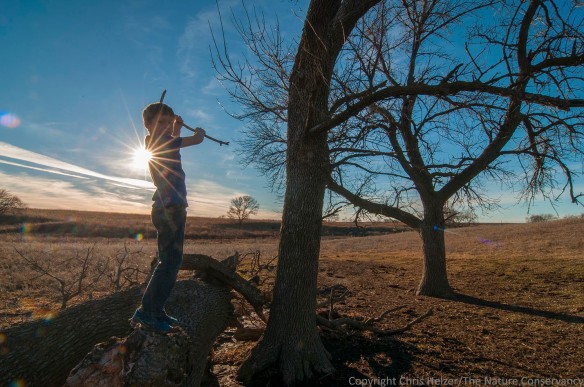 Calvin and his stick.  (Yes, I was having fun with the sun.)

Calvin again.  And the sun.  Again.

12 thoughts on “Boys and Sticks”