Over the last three days, I’ve given three presentations and led a workshop.  I think I’m running out of words.  There’s no question I’ve run out of the desire to be around people.  I say this in defense of what is going to be a late and very short post at the end of this long week.

I scanned quickly through my February photos tonight and found two that are very different in scale.  One from early February is a close up of a grazed plant in the snow.  The other is a shot of Sandhill cranes that have been pouring into the Platte River this week as part of their annual migration.  I hope you enjoy this very brief (and admittedly lazy) overview of February on the Platte River of Nebraska.  I’m going to bed.

Some kind of plant that was nipped off by some kind of animal. Stiff goldenrod? Rabbit? Platte River Prairies, Nebraska. 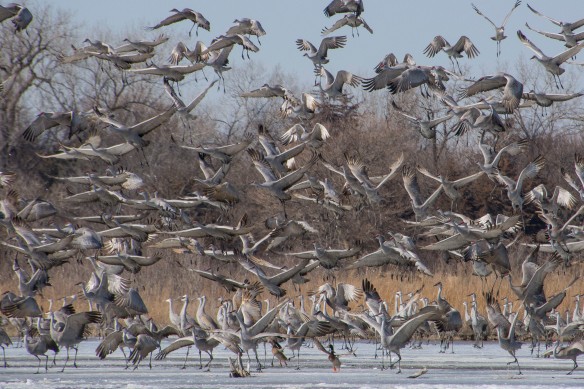 Sandhill cranes on a mostly frozen Platte River this week.