A few weeks ago, I wrote about our trip to the Konza Prairie Biological Station in eastern Kansas.  On that trip, we learned about research results showing that frequent spring fires (one or two year frequency) can prevent encroachment of tallgrass prairie by trees and shrubs.  Less frequent fire allows shrubs, especially dogwood and sumac, to invade.  Pretty simple – we should be burning tallgrass prairie at least every two years, right?

Hang on just a minute, Sparky.

As you might expect, there is more to the story.  It turns out that the frequent spring fire (with no grazing) regimes at Konza has other impacts.  One example is that frequent fire favors grasses over forbs and decreases plant diversity over time.  Prairies that are burned every year or ever two years develop a grass-dominated plant community in which many forb species are difficult to find.  So, frequent fire is bad for plant communities…  Right? 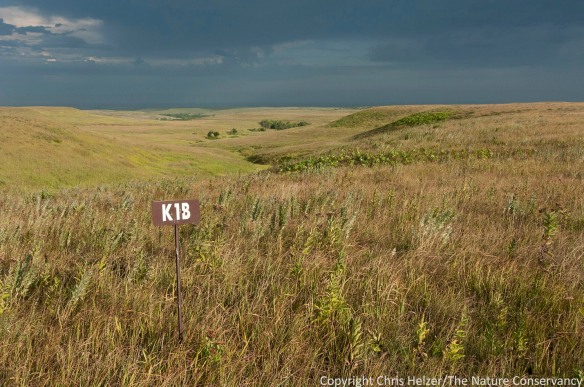 But in other tallgrass prairies, especially in more eastern prairies such as those in Illinois, researchers are seeing very different impacts of frequent fire.  A paper by Marlin Bowles and Michael Jones, for example, found that frequent fire “stabilizes” plant communities in the Chicago, Illinois area, and that plant diversity was positively correlated with fire frequency.  In fact, their results are almost the exact opposite of what was seen at Konza.  In the Illinois study, frequent fire decreased the dominance of warm-season grasses and increased the diversity of summer wildflowers.

Frequently-burned prairie at the University of Wisconsin-Madison Arboretum. Clearly, frequent fire is not incompatible with plant diversity…

What the heck is going on??

If we could answer that question, we’d be miles ahead of where we are now in terms of understanding prairie ecology.  I can come up with lots of potential reasons for the difference between frequent fire application in Illinois versus Kansas, but I can’t confirm or deny any of them – we simply don’t know.  As I think about why prairie plant communities might become more dominated by grasses over time, I wonder about factors such as small scale plant diversity, soil productivity, and the soil microbe community – all of which may correlated with each other.

Eastern remnant (unplowed) prairies tend to have a higher density of plant species (e.g., plant species per square meter) than western prairies. High species density could potentially help suppress grass dominance because of the variety of competition strategies each of those plant species employs to take and defend territory.  Those strategies include allelopathy (releasing chemicals that retard growth of nearby plants), rhizomes (underground stems that can connect even fairly distant stems of the same plant together), root density/depth, and many others.  It seems logical that communities with that kind of well-established complex competitive environment would present a major challenge for any species (grasses or otherwise) trying to become dominant.  Maintaining consistent growing conditions by burning or haying annually might facilitate stability within those plant communities because it essentially maintains a stalemate; no plant species is ever given a window of opportunity to gain advantage over its neighbors.  Or this could all be balderdash – I’m just throwing out ideas here.

Does the rich soil organic matter content of eastern tallgrass prairies help suppress grass dominance?  It’s probably the major reason for the higher plant species density in those prairies, so maybe.  On the other hand, research at Konza and elsewhere in more western prairies shows that adding nitrogen to prairies (increasing productivity) increases grass dominance and lowers plant diversity.  Hmm.

Soil microbial communities surely have a very important influence on plant diversity, but (as discussed in a previous post) we don’t know much about them yet.  I’m optimistic that our understanding of soil microbes will grow tremendously during the next few decades, but the complexity of that world might mean that it will take many more decades before we start to get a grasp on it.  In the meantime, we can use it as a convenient scapegoat.  If something you don’t like is happening to your prairie, it’s probably a soil microbe problem…

Those of you who read this blog frequently may be surprised that I haven’t mentioned insects or other animals yet.  Let’s talk about them now, shall we?

It’s very important to remember that even if frequent burning seems to maintain high plant diversity in (some) prairies, a prairie is much more than just plants.  The use of frequent fire tends to create fairly homogenous habitat conditions across a prairie.  Regrowth rates are similar across the whole burned area, so vegetation height and density is relatively uniform.  Dead material, including both litter and standing dead vegetation, is scarce.  Because habitat diversity is limited, so is the diversity of creatures that rely on that habitat.  In taxonomic groups ranging from grasshoppers and spiders to mice and birds, research shows that habitat diversity is positively correlated with species diversity.  Creating habitat heterogeneity – through grazing, patchy mowing, or other means can help facilitate a more diverse animal community.  Burning in a less regimented way can help too, especially if that means splitting a prairie into multiple management units and burning only a subset of those each year.

Heterogeneous habitat structure, including tall, short, and mixed-height vegetation – like that shown here – can help maintain diverse invertebrate and wildlife communities.  Grazing is one great way to manipulate vegetation structure, but isn’t feasible at all sites.  Grazed prairie at The Nature Conservancy’s Platte River Prairies, Nebraska.

In small isolated prairies, it’s also critically important not to burn (or mow) the entire prairie at the same time.  With limited opportunities for species to recolonize from other prairies, a fire that kills all of the individuals of a particular species (e.g., an insect that overwinters in the stems of grasses or in the litter along the ground) can mean the end of that species’ existence in that prairie.  Maintaining a floristically diverse prairie without a full complement of invertebrates doesn’t seem like success to me.  On the other hand, I also appreciate the difficulties associated with managing small prairies.

To wrap this up, I think there are two really important points to make about fire frequency in prairie management.  First, there are some big questions about why frequent fire seems to maintain high plant diversity in some prairies but encourages grass dominance in others.  Figuring out the answers to those questions may be one of the more important keys to prairie conservation success.  Second, even if frequent fire maintains high plant diversity and repels invasion by shrubs and trees, it still might not be the best choice for a prairie management strategy.  There is much more to a prairie than its plants, and even if you don’t much care for invertebrates, birds, reptiles, or mammals (and how could you not?) those species – especially the invertebrates – are strongly tied to the long-term viability of the plant community, so it’s probably not good to ignore them.  To be clear, I’m not saying people who use frequent fire are evil destroyers of animals.  I’m just raising a flag of caution and pointing out some potential tradeoffs. 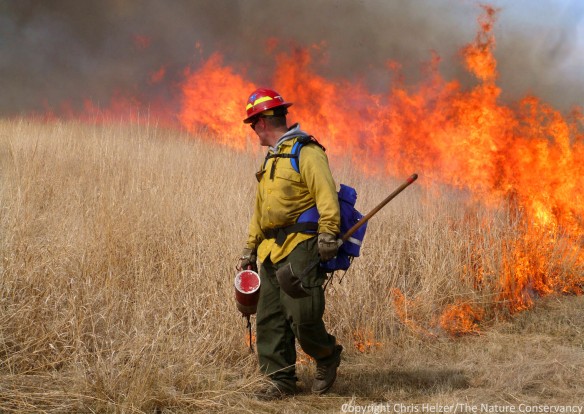 Prescribed burning is a valuable management tool, but its impacts on prairie communities can be complicated.  It’s important for prairie managers to recognize and account for both the negative and positive impacts of fire.

Those of us who work with prairies are used to the seemingly overwhelming complexity of grassland communities and the way those communities respond to management.  In fact, for many of us, it’s a big reason we love prairies as much as we do.  While we still have more questions than answers about effective prairie management, we have enough information to go forward with.  Most importantly, prairies are pretty tough, so excepting drastic measures such as broadcast spraying with 2,4-D (and maybe burning an entire tiny prairie), we have the latitude to try out lots of ideas and see what works.  We’ll learn as we go.

In the meantime, it’d be great if all you researchers out there would get cracking on the issue of disparate effects of frequent fire in eastern versus western prairies.  It should only take a few decades to figure it out…  Right?