It’s bad enough that invasive species are taking over our prairies and other natural areas.  Why do we insist on helping them do it?

When my dad was in high school in the 1960’s, he planted trees and shrubs behind the pond in my grandpa’s pasture as part of a 4H conservation project.  The species he planted – Russian olive, eastern red cedar, honeysuckle, and multiflora rose – were all promoted as conservation trees at the time but considered to be invasive species today.  The honeysuckle and multiflora rose didn’t make it, but we’ve still got a strong population of Russian olive and cedar trees today, and now that I’m taking over the management of the pasture, I’m making plans to eradicate them.  I give my dad a break on this one because it was a long time ago.  Unfortunately, less has changed in the last 50 years than you might hope for.  (See my earlier post on invasive trees in prairies)

Eastern red cedar trees are native to Nebraska, and so should probably be labeled as “aggressive” rather than “invasive” – though they can certainly take over grasslands, they’re only a problem where fire has been removed from the ecosystem.  Russian olives, on the other hand, are clearly invasive species.  Many thousands of dollars are being spent trying to remove them from riparian areas around Nebraska and many other states.  Why, then, are we still planting Russian olives??  They are still listed and sold as conservation trees in Nebraska, and several agencies have long been providing cost-share dollars and promoting both the planting AND eradication of Russian olive trees (a situation that is just starting to change). 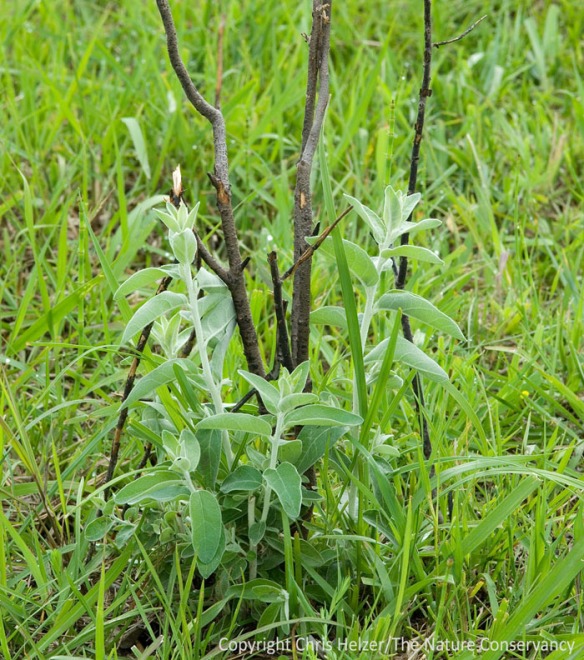 A Russian olive tree resprouting after a late-spring prescribed fire. Russian olives and most other deciduous trees are particularly difficult because of their capacity to re-sprout.

Siberian elm is another species that is being both promoted and controlled.  The species was first introduced to the United States in 1860.  When Dutch elm disease started wiping out American elms in the 1930’s, Siberian elm gained popularity because it was much less susceptible.  It was also promoted as a substitute for privet (another introduced invasive species) in hedge plantings.  Today, Siberian elm is widely recognized across the country as an invasive species (it is an official noxious weed in New Mexico) and is one of the most aggressive trees invading prairies in Nebraska and other states.  Its abundant wind-dispersed seeds allows it to quickly overwhelm grasslands (and grassland managers) with numerous small saplings.  They are common urban trees – but largely reviled because of their brittle branches and unattractive crown shape.   Notwithstanding its record, however, this ugly aggressive non-native tree is still being promoted as a conservation tree in Nebraska and elsewhere, and the U.S. Department of Agriculture’s Plant Materials Center in Kansas is actually developing an “improved” cultivar for use in the western Great Plains (see page 82 of this report for details).

Unfortunately, Russian Olive and Siberian elm are only two of many examples of introduced species that are simultaneously viewed as useful and invasive by different constituencies.  Nebraska’s newest official noxious weed is Japanese Knotweed, which has numerous hybrids (most of which are invasive) that can still be purchased through garden catalogs.  Sericea lespedeza, a horrible invasive plant in the southern prairies (and a noxious weed in Kansas and Colorado) is still promoted as a forage and wildlife plant by Auburn University.  In fact, sericea’s status as a “crop” is preventing the development of biocontrol agents that may be the only hope of controlling its spread.

Invasive grasses such as smooth brome, tall fescue, and reed canarygrass are being promoted as forage crops for livestock at the same time that huge amounts of money and effort are being spent to keep them from overrunning prairies.  Perhaps most frightening, Monsanto and Scotts have developed strains of Kentucky bluegrass and creeping bentgrass (both invasive grasses in prairies) that are resistant to glyphosate herbicide (aka Roundup) for use in turfgrass applications.  The possibility (probability) that those Roundup Ready species will either escape from planted areas or hybridize with naturalized populations is apparently being ignored – in spite of the fact that the bentgrass has already escaped from test plots in Oregon.  There are plenty of other examples of introduced ornamental or agricultural plants that we’re assisting with their invasion of natural areas, but the list is too long and depressing to present here.

Why do we have such trouble agreeing whether species are helpful or harmful?  A big part of the problem is the diversity of organizations and entities that work to introduce, promote, evaluate, and/or control plant species.  There is no single clear controlling entity that can designate species as being invasive or not.  Because of that, an internet search is not usually an effective way for a member of the general public to find out whether or not a species is invasive.  While there are excellent sites like the USDA’s PLANTS database that list whether the species is considered to be invasive or a noxious weed in any states, a general search for species like sericea lespedeza brings up some websites that promote it as a wonder plant and others that denounce it as a nasty weed.  What’s a person to believe?  (In this case, it’s a nasty weed…)

To further confuse things, those who continue to promote the use of invasive species often claim that the species aren’t invasive in the habitat type or geographic area they’re promoting them for.  I often hear that Russian olive trees are safe to plant as long as you only put them in uplands, and not in lowlands where they become invasive.  This argument appears to rely on the assumption that the wildlife species eating the Russian olive’s “wildlife friendly” fruits don’t move between upland and lowland habitats.  Considering a species safe in one state when it’s demonstrated to be invasive in a nearby state is equally illogical.  True, it can be difficult to predict whether a species will be able to thrive in one area or another without actually testing it, but given the cost of controlling invasive species, why take a chance? 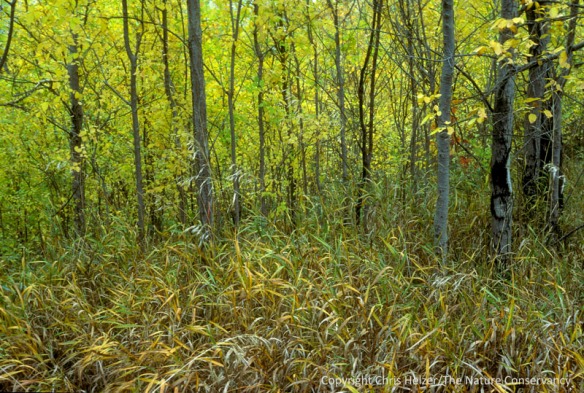 How Do we Fix the Problems?

One part of the solution to these issues is to make the general public more aware of which species are considered to be invasive in their area.  Nebraska is currently building a set of lists that will identify known and candidate invasive species, and will rank them by severity and the appropriate response needed (e.g. – prevent their introduction, eradicate current populations, or contain the spread of current populations).  It’s surprising that lists such as this are not more widely available across the country, but they’re actually difficult to find.  Of course, while lists of invasives are helpful, they only work when they’re used.  It’s difficult to imagine many homeowners taking the time to cross check their annual garden catalog wish list against an invasive species list before ordering.  Most consumers assume that if they can buy it, it must be safe – something that is far from true – and the conflicting information found on the internet and in other sources only serves to further confuse and frustrate people.

Educating the general public about the value of using native species for both urban and rural plantings – thus avoiding the risk of introducing species that may become invasive- is another important approach.   I’m a big fan of using native plants, but I’m also realistic about both the difficulty of marketing natives and some of the complications associated with “native” plants.  One of those complications is that it’s very difficult for the public to know which plants are actually native.  For example, mixtures of wildflower or wildlife habitat seeds that are commonly sold in Nebraska and other prairie states include both native wildflower species (though often with genetic origins from far away states) and non-native species, some of which are invasive.  Invasive species that are often included in wildflower mixes include oxe-eye (shasta) daisy, damesrocket, baby’s breath, bouncing-bet, birdsfoot trefoil, red clover, chicory, common St. Johnswort, Queen Anne’s-lace, sweet clover and many others.   It’s not reasonable to expect consumers to be able to determine which species are safe and which aren’t.  (What could be dangerous about wildflowers?)

The demand side of the equation (consumers) is an important place for us to focus attention, but the only way we’re really going to solve the problem is by also working on the supply side.  Somehow, we have to build consensus and understanding between those who are fighting invasive species (e.g. conservation and agriculture groups and landowners) and those who are introducing and promoting new plants (e.g. some agencies, universities, and nurseries).  It’s certainly not going to be a quick or easy process, and it’s not going to solve the problem completely – but the only other option is to continue fighting an ever-growing list of invasive species.

Rather than sniping at each other across fences, we need to build partnerships that bring together nursery organizations and noxious weed control agencies, tree advocates and prairie biologists, and forage specialists and native plant enthusiasts.  The initial partnerships don’t have to be (can’t be?) built around the sources of greatest disagreement.  For example, nursery owners and noxious weed agents might come together because they both see the need for improved influence over nurseries that purposefully (or neglectfully) sell plants that are clearly illegal to sell – nursery owners might be concerned about reputational risk of the nursery industry as a whole, and noxious weed agents would want to prevent introductions of dangerous plants.  More difficult discussions about how to handle the sale of plants that are potentially, but not definitively, invasive can wait.  Once a rapport has been established, it’s much easier for both sides to see and appreciate the point of view of the other – and both have a stake in maintaining the relationship by finding ways to compromise.  In some cases, it might not be possible to build partnerships right away, but important first steps toward building relationships can include things as simple as inviting each other to attend meetings, join field trips, or give presentations on current and future projects.  Anything that gets people into the same space so they can see each other as people rather than adversaries is likely to be productive.

Invasive species are one of the biggest threats to prairies (maybe the biggest) and the issue is much bigger than simply attacking species as they appear.  If we can work to prevent the next leafy spurge or sericea lespedeza from being introduced or released in the first place, just about any level of effort would be worthwhile.  It’s up to all of us to raise awareness about the risks of introduced species and the benefits of native species.  Even more importantly, it’s up to us to work with those who see things differently than we do to establish relationships and common understanding.  While it’s tempting to go around with a rolled-up newspaper and whack those who appear to be acting irresponsibly, that’s not likely to be very productive.  Maybe we should start by sending them (carefully vetted) flowers instead!