To be perfectly honest, this post is mainly to build my own morale.  Last week, we were finally able to squeeze off our first prescribed fire of the season.  Typically, we get several good windows of opportunity during the month of March, but this year it was late in the month before the combination of wind, temperature, and relative humidity all lined up – and even then it was a very short window.  We woke up to temperatures in the mid 20’s and a couple hours after we wrapped up the fire we had thunder/lightning and sleet.  However, between late morning and mid-afternoon, we had very nice conditions for a prescribed fire.  It looks like that will be the only fire we get done in March – we have snow on the ground again, and while temperatures are forecast to rise toward the weekend, the wind speeds are too, making it unlikely we’ll burn again until at least next week.

Looking at these photos from our successful first fire helps distract me from the list of other fires we’re still waiting to complete during the next couple of weeks (not to mention the long list of later-spring fires that will follow!) 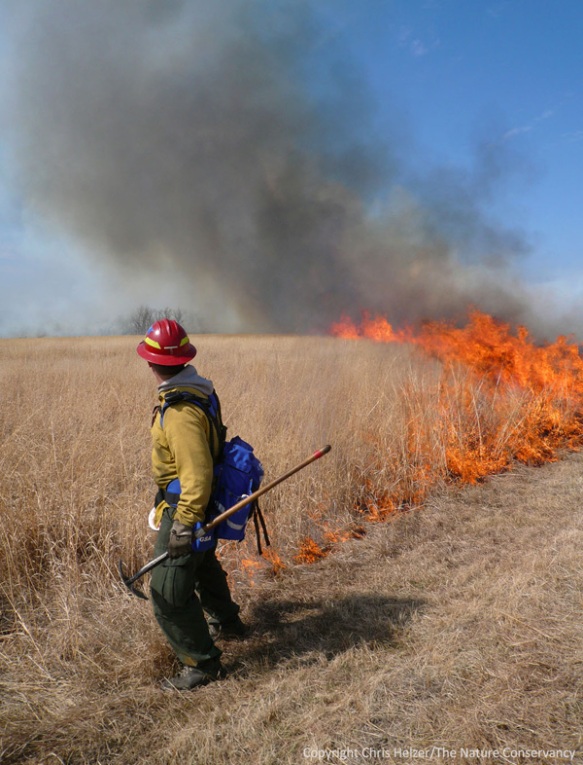 The cold overcast conditions of the morning gave way to mostly sunny skies by early afternoon, which warmed and dried the grass and helped it burn more completely. For this fire, our burn crew size was bolstered by the addition of several staff from the nearby U.S. Fish and Wildlife Service Refuges office. 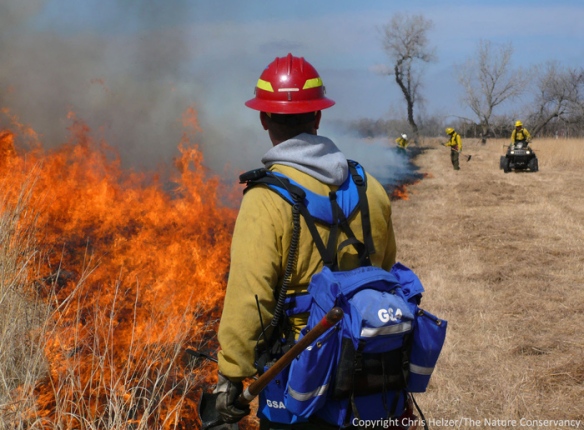 Our objective for the fire was to remove the thatch/litter from approximately 1/3 of the 175 acre prairie as part of our patch-burn grazing management. Beginning in early April, this site will be grazed by cattle, at a light/moderate stocking rate. Those cattle should graze the burned patch fairly intensively, while leaving the unburned patches largely ungrazed.

As the fire unit was finally ringed, a big plume of smoke rose into the air. Because our Platte River Prairies are near Interstate 80, we have to be very cautious about keeping smoke away from highway traffic. On this day, we had two things in our favor - the excellent lifting of the smoke (because of heat of the fire and the unstable atmosphere) and the east winds, which kept the smoke off of the Interstate to our north. 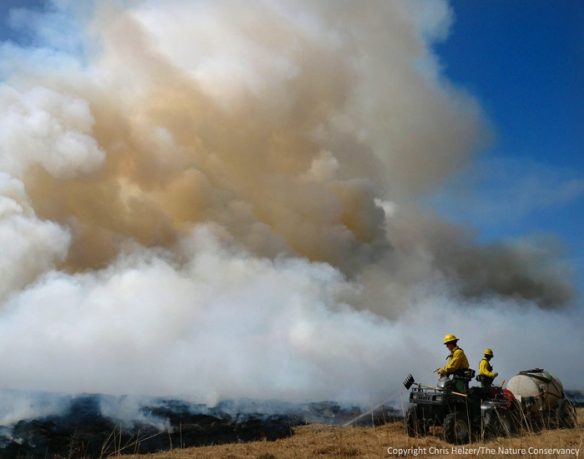 As the fire consumed the remaining grass inside the unit, our crew extinguished the last flames along the edges. We then began the long process of mopping up, which in a grazed prairie primarily means raking smoking piles of dried manure away from the edges of the fire unit. As we mopped up, we watched the half a dozen Swainson's hawks which, attracted by the smoke, had come to feed on the voles and other small mammals that were too slow to find new cover as they escaped from the fire.

14 thoughts on “First Prescribed Fire of the Season”