We had a good lesson in the need for redundancy in our prescribed fire operations this season.  Built-in redundancy is important in many aspects of our world, from business (multiple parts suppliers for a manufacturer) to ecology (e.g. multiple flowering species available to pollinators).  It’s no less important when conducting prescribed fires.  In our case, it turned out that our redundancy in fire equipment saved us from what could have been an uncomfortable situation.

Our burn unit for the day was a pretty simple one.  Twenty five acres of grassland research plots, with roads on two sides and a river on a third side.  The only possible escape was into more of our own grassland, (which was surrounded by cropland) but there was a wide trail road and some additional mowed area in between our unit and that grassland.  To burn the site, we had six crew, two ATV units with 120 gallon high-pressure sprayer trailers, a third ATV with a 25 gallon tank/electric pump, and a fire truck with 300 gallons of water in the back – plus assorted hand tools and backpack sprayers.

This photo from a different fire shows the kind of ATV/Trailer unit we use on prescribed fires. They are normally extremely dependable and mobile fire units, and their high-pressure spray capability can snuff out fire very quickly. However, that only works when all the hoses and tires are functioning!

As we were lighting the first line, a high pressure hose on one of the ATV trailers burst, taking that sprayer out of commission.  We immediately called another staff person who was nearby (not part of the fire crew) and he took off to town for a replacement hose.  In the meantime, we made the decision to continue the fire since we still had the fire truck in reserve and really were only planning to use one ATV trailer anyway.  A little while later, one of our crew ran into a steel post and blew out a tire on the second ATV trailer.  That left us with the electric sprayer on the third ATV and the fire truck as our firefighting equipment – and a fire that was now backing into the wind along much of the 25 acre unit.  At that point, it was clear that we needed to shut the fire down until we could get at least one of the other two units fixed.  It took about 15 minutes to put out the backing fire – mostly with the small ATV sprayer, but we used the fire truck some too (mostly for practice).  About an hour later we had the hose fixed on one of ATV trailers, so we re-ignited the fire and finished it with no further incidents.

In this case, we escaped (poor word choice?) without any real problems from the equipment issues we faced on the fire.  The simple burn unit and good firebreaks made the issues much less stressful than if we’d been burning the other unit we were considering for the same day (a larger unit separated from a couple thousand acres of grassland by mowed firebreaks).  We were able to continue the fire even after the hose burst on the first trailer because we still had one trailer for our primary vehicle and the fire truck as a backup.  If we’d been burning the more complicated unit, we would have shut the fire down after the hose burst and waited until it was fixed to continue – because on that unit we would have been relying on both trailers.

It seems to me that stories of escaped prescribed fires usually fall into one of three categories.  The first category includes fires that are lost because people were completely inexperienced with fire and were unprepared in terms of weather forecast, needed equipment, and/or the number of necessary experienced crew.  The second category is an unexpected change in wind/humidity conditions (sometimes because of an incorrect forecast, but sometimes because a current and detailed forecast was never obtained).  The third category is the one I pay the most attention to, because it’s the most likely to apply to our work.  In that third category of escapes, something happens to one piece of equipment (flat tire, truck gets stuck, etc.) and while the crew is trying to adjust to that calamity, something else happens to compound the first problem (e.g., another truck gets stuck or the crew leaves one line to help with the first problem and the fire gets away). 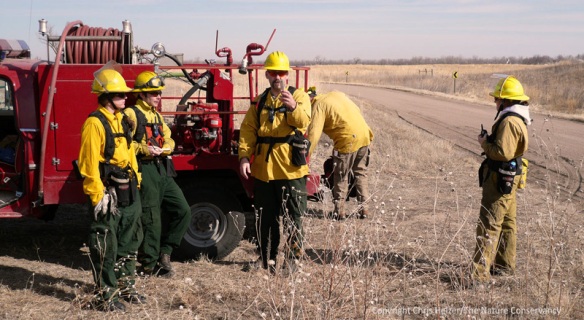 This photo shows our crew checking current weather conditions prior to starting a fire in 2009. Working with the most current and specific forecast possible and checking conditions before and during the burn can help limit surprises. Also, in the background is the used fire truck we purchased from a local volunteer department several years ago when they auctioned it off. It's handy to have it on hand when we burn, both as a backup firefighting vehicle and as a water supply to fill our other units. We don't get to use the lights and siren on public roads, though...

That compounding of problems – aka incidents within incidents – is a recurring theme among the relatively few escapes that occur when experienced crews are conducting prescribed fires.  Unlucky events will occur during prescribed fires, and the best preparations won’t prevent all of them.  However, preparation can help prevent those events from cascading into disaster.  It’s critical to have a good plan and an experienced crew that can make the right decisions during stressful situations, but it’s also critical to have redundancy in available equipment.  Whether it’s a backpack sprayer or 2-ton truck, it’s critically important to have a backup when something goes wrong with a piece of equipment you’re relying on to contain the fire.  In our case, having the fire truck in reserve allowed us to continue the fire after the first incident and helped shut it down after the second.  (Again, if we’d been on a more complex fire unit, we would have shut down the fire after the first incident.)

I’ve conducted more than 150 prescribed fires, and I learn something from almost every one of them.  One of our crew this year asked me if I enjoy fires more or less as the years go by.  My initial response was that I enjoy them less because I’ve seen more examples of what can go wrong.  Upon reflection, it’s not that simple.  Experience certainly helps remind me to be cautious, but it also helps me to be better prepared.  Being prepared mentally – and having plenty of redundancy in equipment – makes surprises less surprising and easier to deal with.

The fire in this example turned out to be nothing more than a good reminder for the crew and me about why it’s important to haul all that equipment to each of our fires – even the easy ones.  Being prepared for the worst-case scenario makes anything less than that seem very manageable… and manageable is exactly what I like in a prescribed fire.

15 thoughts on “The Importance of Equipment Redundancy in Prescribed Fire”