We started seeing our first regal fritillary butterflies of the season last week, and began our second year of data collection on their habitat use in the Platte River Prairies.  As always, male fritillaries have emerged first and now have to wait a couple more weeks before females arrive on the scene.  In the meantime, they do some nectaring, but mostly seem to just fly around.  They look like a bunch of teenage boys who arrived at the school dance before the girls…

The above regal fritillary was nectaring on a plant that will remain a mystery until my next post (sorry).  I was expecting to see them nectaring on common and showy milkweeds (Asclepias syriaca and A. speciosa) because those plants were just starting to bloom.  In some studies of regal fritillaries, milkweeds are major nectar plants.  Last year we saw regal fritillaries using hoary vervain (Verbena stricta) more than anything else, but I didn’t see a lot of milkweed blooming last year – for some reason.  This year, I figured maybe we’d see something different since milkweeds seem to be having a good year.

As I walked around checking milkweed flowers for butterflies, I saw a number of insect species using them, but none more abundant than the gray copper butterfly.  In fact, I saw one flower that had six coppers on it at the same time.

I did see a few regal fritillaries nectaring on milkweeds, but surprisingly few, given the high numbers of both fritillaries and milkweeds I was seeing.  Eventually, I decided to just sit for a few minutes in front of one milkweed plant to watch the gray copper butterfly that was nectaring on it.  I figured I’d get to see a parade of other insects come by and nectar there as well. 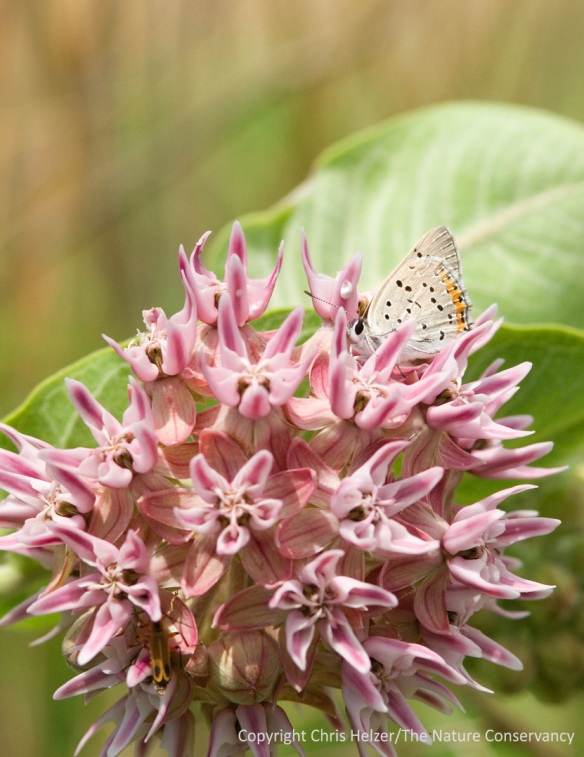 What looks like a peaceful scene with a pretty butterfly nectaring on a flower belies the bottled up aggression waiting to boil over when another butterfly strays too close...

Throughout the day, I saw the same aggressive behavior by coppers on other milkweeds as well.  It’s hard to say, of course, whether the coppers were really protecting their nectar source, but that’s what it looked like to me.  There has been considerable discussion in the scientific literature about whether or not male butterflies (of some species) defend territories like birds do – keeping other males away.  There seems to be consensus that at least a few species do.

What I was seeing, though, was not mating territory defense.  Assuming that coppers can recognize the difference between their own and other butterfly species, they didn’t appear to be chasing away potential competitors for mates.  Instead, they appeared to be monopolizing a valuable food source.  Even when there were multiple milkweed flowers on a plant, or several plants in a clump, coppers successfully chased fritillaries away as they approached.  Interestingly, while coppers wouldn’t tolerate fritillaries, they didnm’t seem to mind sharing flowers with other coppers…  There weren’t many individuals of other butterfly species around, so I didn’t get a good feel for whether coppers chased away all other butterflies or just fritillaries.

I’ve not seen or heard of this kind of behavior before, but I’m sure other people have.  I’d sure appreciate hearing from you if you know anything about it.