We completed our second season of regal fritillary butterfly data collection this summer.  Funded by State Wildlife Grant funds from the Nebraska Game and Parks Commission, our surveys are designed to help us better understand how this butterfly species is responding to our prairie restoration and management work.  The species is doing very well in Nebraska, and the central Platte River valley has some of the highest concentrations of regals in the country, but the species is of conservation concern because of it’s extreme rarity elsewhere in its historic range.  In addition to informing our work, we hope that studying the species where it’s common can help inform conservation efforts in those places where it’s rare.

Some people may be surprised to hear that regal fritillary butterfly populations are thriving in the central Platte River valley – a landscape dominated mainly by rowcrop agriculture and degraded prairie plant communities.  The neighborhood around our Platte River Prairies is about 30% grassland – a higher percentage of prairie than many eastern tallgrass landscapes, but certainly not a large unbroken prairie landscape.  Moreover, Platte River grasslands tend to have long histories of chronic overgrazing and broadcast herbicide use which has left them with limited plant diversity.  Even most of our annually-hayed prairies are missing many wildflower species that would be expected to be dominant in those prairie types.  The fact that regal fritillaries are thriving in this landscape seems counter to some of what is published about the species’ reliance on “high quality prairie”, but they’re here nonetheless!

Regal fritillaries rely on violets as the sole food source for their larvae.  In our Platte River Prairies, the only perennial violet species we have is the common blue violet (Viola sororia).  In much of the eastern tallgrass prairie, prairie violets (V. pedatifida) or bird’s foot violets (V. pedata) are thought to be the preferred species, but we don’t get those species in our area.  Fortunately, the common blue violet thrives in pastures with long histories of annual intensive grazing, so the supply of larval food sources is not limited in our landscape.  It may be that the abundance of violets and the amount of grassland left in the valley are the two primary reasons for the regal fritillary’s continued success here.

Common blue violets (Viola sororia) are abundant in our degraded prairies - along with lots of Kentucky bluegrass. The species appears to support strong regal fritillary populations.

A brief report of our findings from 2011 can be found in this PDF, but I’ll lay out a few of the highlights here.  First, the seasonal patterns of butterfly abundance we’re seeing seems to match what we know of the life history of the species.  Males emerge first (late June), with highest numbers occurring in areas with relatively high amounts of thatch and lots of violets.  Those males tend to spend the next couple weeks flying around the same place they emerged from until the females also emerge and mating takes place.  That mating period is when we see the most fritillaries along our transects.  Following that, the number sightings drop as males begin to die off and females enter a period of “reproductive diapause”, during which they spend much of their time sitting around in the shade.  Finally, in late August, we see a little bump in our numbers again as females begin flying around and laying eggs.  (Those eggs then hatch, and the larvae – if they find enough violets to eat – will overwinter in the thatch.)

The effects of prescribed fire on regal fritillaries and other butterflies is a frequent topic of discussion among ecologists.  At our sites, we definitely see the highest numbers of regals emerging in June and July from prairies with high numbers of violets and with a build up of thatch.  Prairies that were burned in the spring have very few fritillaries during that peak period of emergence and mating – the larvae almost surely perish in spring fires.  However, during the summer of 2011, two of our top three sites for nectaring activity had been burned in the spring of that year.  It may be that in landscapes of relatively abundant habitat, a mixture of burned and unburned areas can complement each other by providing high quality larval habitat (unburned) and nectaring habitat (burned).

In addition to prescribed fire, our other major management tool is cattle grazing – and the two are often combined within our various patch-burn grazing systems.  The burned areas mentioned above where nectaring activity was high were also being grazed.  Under our light stocking rates, cattle focus primarily on grasses, leaving most wildflowers to bloom – making them available to pollinators, including regal fritillaries.  Under higher stocking rates, fewer wildflowers escape grazing and regal fritillary are lower.  However, even areas that are burned and intensively grazed recover quickly, and within a year or two (as cattle focus on more recently burned areas) become hot spots for regal fritillaries again.  As stated earlier, it appears that a mixture of management treatments across a landscape with fairly abundant habitat is compatible with successful regal fritillary populations.

After our 2010 butterfly surveys, I posted a report on the nectar use by regal fritillaries and other butterfly species.  Those 2010 surveys included a slightly different mixture of prairies from our 2011 surveys, and included some transects where we counted all butterfly species.  Within that context, the clear favorite nectar plant was hoary vervain (Verbena stricta).  In 2011, vervain was still among the top nectar species for regal fritillaries – particularly in degraded remnants where it can be very abundant – but it was not quite as dominant as in last year’s surveys.  I think this was mainly because we included more restored prairies in our surveys this year, and the diversity of flowers was higher in those sites.  Even so, hoary vervain tied for first place in nectar species use with the combination of common and showy milkweeds (Asclepias syriaca and A. speciosa), followed closely by bee balm (Monarda fistulosa) and various thistle species (Carduus nutans and Cirsium spp).  It’s important to point out, however, that we only had 27 sightings of nectaring regal fritillary butterflies in 2011 (out of 352 total sightings), so our sample size was fairly limited. 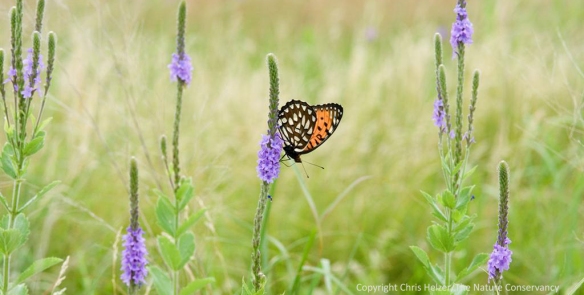 Regal fritillaries in the central Platte River valley really like hoary vervain (Verbena stricta) as a nectar plant. Vervain survives intensive grazing very well, so it can be abundant in some of our more degraded pastures, as well as in our restored prairies.

Among those 27 sightings of regal fritillaries nectaring, all but four of them were in restored prairies (former crop fields).  At least based on the data we’ve collected so far, it appears that our regal fritillaries are tied to degraded remnants (lots of violets) for larval production but move into our restored prairies (lots of nectar plants) later in the season.  A quick and dirty correlation analysis showed that after the mating season was over, butterfly sightings were most likely to occur in portions of prairie with high abundances of their favorite nectar plants – but there was no such correlation prior to or during the mating season.  Again, a mixture of habitat types (this time, restored and remnant) appears to provide complementary resources for the butterflies in the Platte River Prairies.

Clearly, regal fritillaries managed to survive just fine along the Platte River before our restored prairies were available, so it’s not that we’ve saved the species through our restoration work.  Intensively grazed pastures tend to have high numbers of hoary vervain flowers for nectaring, and some hayed prairies in the valley contain good numbers of milkweeds and other nectar species as well.  However, watching the behavior of fritillaries when areas of high nectar plant abundance (e.g., our restored prairies) become available may tell us about what their preferred habitat conditions are.

Thistles, including this musk thistle, are among the favorite nectar plants for regal fritillaries - along with hoary vervain, bee balm, and common milkweed. At least for now, musk thistle is surviving just fine in the Platte Valley. (hooray?)

I feel pretty confident that regal fritillaries are managing to survive within the context of our current prairie restoration and management work.  However, we’re still not able to figure out where they’re laying their eggs.  According to the literature, regal fritillary females don’t lay their eggs on violets (why??) and no one is even sure if they select locations near violets.  I sure hope our regal fritillary females return to remnant prairies (where violets are abundant) to lay eggs, rather than laying them in our restored prairies.  If our restored prairies – with their abundant nectar plants – are luring those females away from prime egg-laying habitat, that’s not a good thing.  To date, we just can’t get enough sightings during that late summer egg-laying period to figure out what’s going on.  We even tried following females around to see if they were laying eggs but that turned out to be pretty difficult.  I guess since the population seems to be strong I’m not going to worry about it too much, but I’d still like to know what they’re doing.

Because of the limited time we can devote to this project, it’s necessarily more of a pilot project than a full-blown research effort.  If there are scientists out there who would be interested in following up on our initial work, I’d be more than happy to work with you.

In the meantime, you can see read the report from our 2011 surveys here, including lots of fun graphs and tables.