Photography is easy.  All you have to do is invest in a really good camera and be in the right place at the right time.

Or at least that’s what I’m told by people who aren’t photographers.

I always respond that while it’s important to have good lenses and an adequate camera, equipment is actually a pretty minor part of good photography.  The most important quality of a photographer is the ability to recognize and take advantage of various lighting conditions.

…It doesn’t hurt to have patience and perserverance either.  Just last week, in fact, I was trying to photograph bees on prairie clover and used up almost all the patience and perserverance I had with me at the time.  I thought some of you might enjoy seeing how many of my photography days go – instead of just seeing the final photos I select from the hundreds of rejects.  Those of you who are photographers will probably emphathize with me, and those of you who aren’t will get a window into the process.  All of you will probably have a good chuckle at my expense.  So be it – it’s a holiday, after all – have some fun. 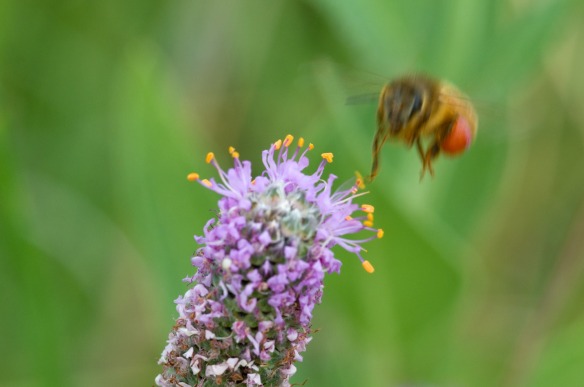 The thing about bees is that they never seem to hold still. It’s not just that they keep crawling around a flower – they move REALLY FAST!

I’ve got lots of photos just like this from about 15 minutes of trying to get one stupid photo of a honey bee. There were hundreds of them buzzing around a big patch of prairie clovers, and they weren’t hard to get close to. They just never stopped MOVING.

With insects, and really all animals, it’s critically important to get the eye(s) in focus, because that’s where the eye of the viewer is drawn. If the eye isn’t sharp, the photo is pretty much junk. So there I was, trying to focus on the eye of a bee that was flying and crawling around flowers like it was hyped up on Mountain Dew. Oh, and there was a good wind blowing the flowers around too. That was fun.  In this photo, I didn’t manage to get ANYTHING in focus – mainly because the flower and bee were both moving too fast. 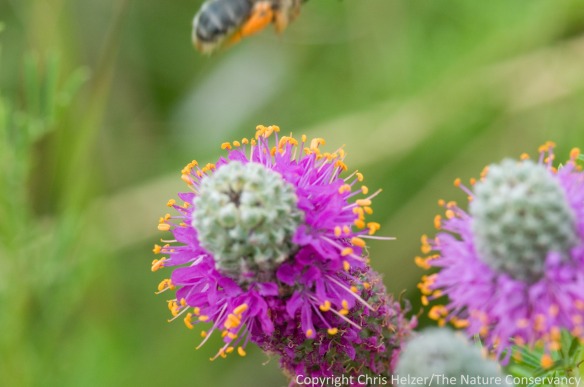 I was using two legs of my tripod to stabilize the camera, and then leaning in and out toward the flower, trying to find the right focal distance (it seemed easier than trying to turn the focus ring on the lens while trying to catch up to a moving subject – and autofocus was zero help… much too slow.) Whenever I was anywhere close to focused, I’d snap the shutter, hoping it would work. It usually didn’t work very well. Ifn fact, sometimes the bee would leave the flower completely between the time my brain said shoot and my finger pushed the button… 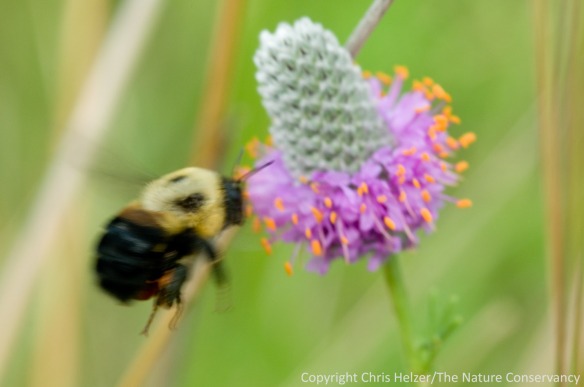 For a while, I switched over to bumblebees, but that didn’t really go any better…

I did eventually manage to get a decent shot of the backside of a bumblebee. This is the exception to the rule about getting the eye in focus. If you can’t see the eye, it doesn’t matter… In this photo, the important part to be sharp is the pollen basket on the bees right side – and it’s pretty good. 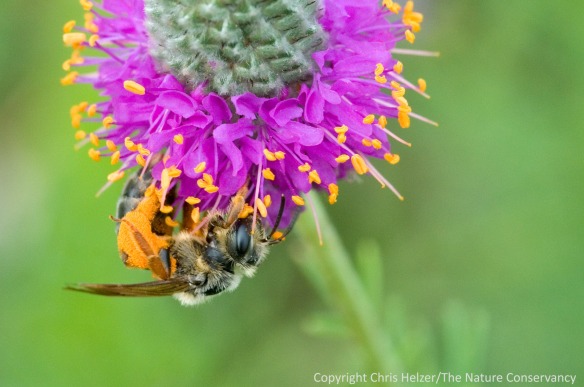 Finally, I managed to get one sharp photo of a honey bee.  Though much of the bee is a little fuzzy (so to speak) the eye is reasonably sharp, and so is the flower.  You can click on the photo to see a clearer image if you want to.  Out of about 15 minutes of photography and a couple hundred frames, I ended up with three decent bee photos (including the bumblebee’s back side).

Since I was running out of both memory card space and patience, I switched over to easier (slower) targets. Soldier beetles are still abundant, and apparently like to take their time and enjoy their meals a bit more than bees do. I think I got three or four good soldier beetle photos out of eight or ten tries.

…And of course, crab spiders are always dependable subjects when I’m looking for something that sits still. …I hope this one caught a couple honey bees after I left. That’ll slow ’em down…

20 thoughts on “HOLD STILL!! Photographing Bees for Fun and Frustration”