It seems like a good time to be a crab spider.  The drought has greatly reduced the number of flowers blooming in prairies, forcing pollinators to visit fewer flowers in greater numbers.  Previously, I’ve used the analogy of crocodiles in watering holes to describe crab spiders waiting in ambush on flowers.  To further that analogy, the drought has now dried up all but a few watering holes, and the crocs just have to sit and wait for the increasingly desperate animals to come to water. 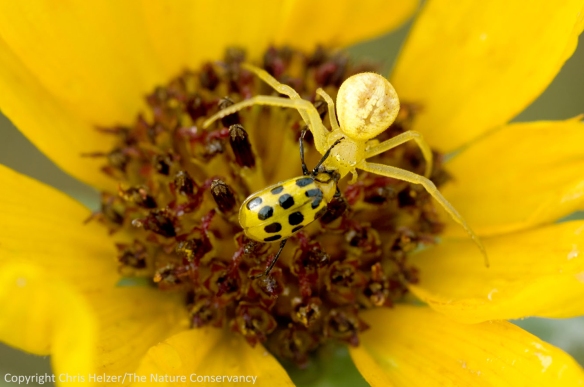 A crab spider with the spotted cucumber beetle it just captured.

When I was photographing for my drought post earlier this week, I found this crab spider, which had just captured a spotted cucumber beetle.  The beetle was still struggling against the spider, but the spider was maintaining a tight grip on its head.  I didn’t stick around for the ending, but it assuredly didn’t end well for the beetle.

If you’re a gardener who has dealt with these beetles on your cucumbers, melons, or other produce, you’re likely not shedding any tears over this photo.  Not only do cucumber beetles feed on the leaves and fruits of garden vegetables, they are also a carrier for bacterial wilt, which can also cause lots of damage.  However, unlike some garden pests, cucumber beetles are native insects who just happen to have found easy pickings in cultivated areas.

Cucumber beetles are a very common sight on prairie flowers right now.  They are feeding on the pollen, but like most beetles provide very little actual pollination for most of those flowers.  While they’re not pests to the degree they are in gardens, these insects aren’t really doing those flowers much good either.

On the other hand, they’re providing a good food source for crab spiders!