Not many insects can feed on milkweed.  Milkweed plants produce a toxin that disables a protein in animals – a protein that facilitates important functions such as muscle contraction.  Only a small number of insect species around the world have evolved ways to get around this challenge. 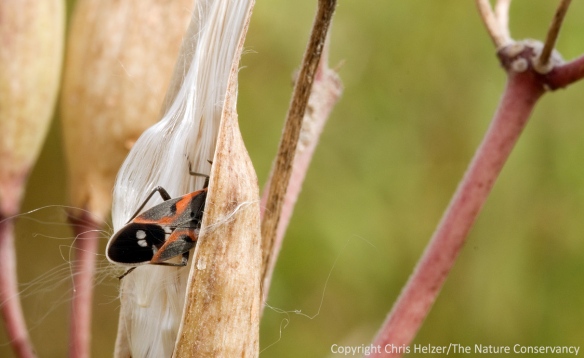 A milkweed bug on swamp milkweed in the Platte River Prairies, Nebraska.

A new study published in the journal Science looked at 14 insect species that feed on milkweed and found that each had developed one of two ways to solve the milkweed toxin challenge.  Ten of the insect species had gone through a genetic mutation that changed the protein in a way that the prevented the toxin from being able to act on it.  The other four species had created a duplicate gene in the protein that allowed it to both carry out its normal function and alter itself to avoid being impacted by the toxin.  You can see a summary of the study and a link to the full article here.

What’s most fascinating is that while these insects are only very distantly related to each other (they spanned three different orders of insects) they ended up with the same solutions to the milkweed toxin issue.  It’s not like one insect species millions of years ago developed in a way that made it immune to milkweed toxin and then begat other species of insects that retained the same quality.  These insects each developed the immunity INDEPENDENTLY.  Fantastic. 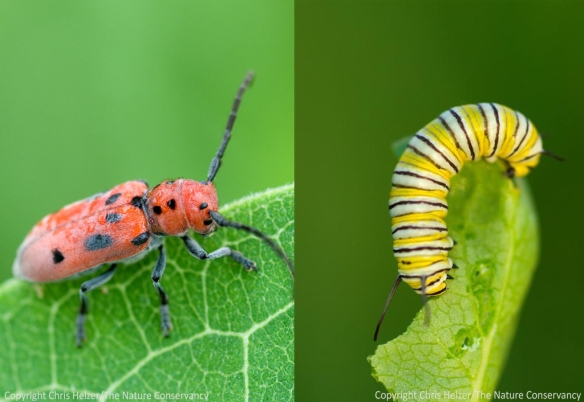 The red milkweed beetle (left) and the monarch butterfly caterpillar (right) are not closely related insects. However, both have independently evolved the same ability to feed on milkweed plants without ill effects.

Now, I have to be careful when talking about evolution because it’s easy to give the impression that these insects did something purposeful to change their bodies – they didn’t.  They changed because natural selection favored individuals with certain genetic mutations that allowed them to eat milkweed without suffering changes to essential proteins.  Unfortunately, evolution can be a hot-button topic these days, and one of the biggest reasons is that many people have a fundamental misunderstanding of how evolution actually works.  If you’re interested, here is a link to website with a very brief but clear explanation of the process.

In the case of milkweed-eating insects, it’s easy to see that being able to eat a plant that competing herbivores can’t eat is a major advantage.  Somewhere in history, a few lucky individuals ended up with a random genetic mutation that allowed them to eat milkweed without ill effects.  Those individuals got a sudden leg up on their competition and, as a result, were more likely to survive and reproduce.  What’s crazy and fun in this case is that multiple unrelated species ended up with similar genetic mutations of their proteins.  They each accidentally “found” the same path to success.  It’s a great world we live in.

9 thoughts on “Evolution in Milkweed-Eating Insects”