This photo was taken several years ago outside the house of my in-laws in eastern Nebraska.  I don’t usually photograph birds, but I was there and the birds were there, and one thing led to another… 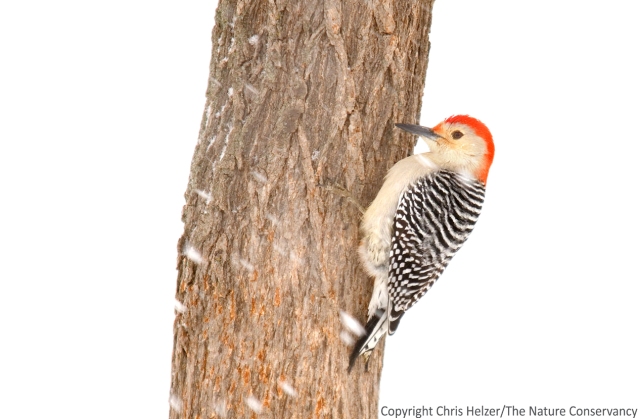 A red-bellied woodpecker pauses near a feeder during a snowstorm. Sarpy County, Nebraska.

It was snowing, but the mid-day light was still bright enough for photography.  As the snow fell, I stood in my coveralls near several bird feeders, hoping the birds would ignore me. I had covered my camera in a plastic bag and wrapped my lens in cardboard (held on with rubber bands) – only the best technology for me!  While the snow piled up on my camera, eyebrows, and beard, I pivoted the camera around on my tripod, attempting to focus on bird after bird as they came near the feeders.  Most of the time, of course, the bird either landed in a non-photogenic spot or moved away before I could get a bead on it.  In spite of that, I eventually managed to get a few useable shots.

This one is my favorite from the day – mainly because of the completely white background.  It would look like a studio shot except for the blurry snowflakes coming past the tree trunk.  In reality, the snow on the ground and in the air behind the bird just blurred together into a pure white background.