I took my boys to our family’s prairie today.  I was only intending to stay for a little while, but they were having so much fun building forts in the trees and drawing pictures in the mud, we stayed for several hours.  Since they were entertaining themselves, I took a walk to see what was blooming.

Because of the late spring, I only found three wildflower species in bloom.  Ground plum (aka buffalo pea or Astragalus crassicarpus) was going strong, and there were a few pussy toes (Antennaria neglecta) getting started.  But the most abundant flower was the good ol’ dandelion.  While the non-native yard weed is disliked by many people, it was certainly popular with many bees and flies who didn’t have many other options for pollen and nectar sources today. 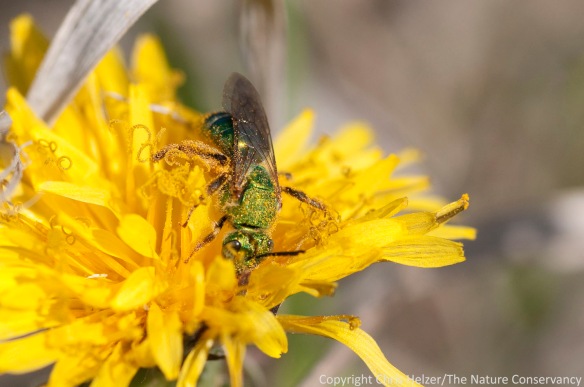 A sweat bee enjoying a pollen-loaded dandelion at the Helzer prairie south of Aurora, Nebraska.  It’s ALMOST sharp enough to be  a good photo.

I tried a few times to photograph bees and flies visiting dandelions, but most were too wary to let me get very close.  The light was pretty harsh anyway, and the bees certainly weren’t going to let me pull out my diffuser (2 ft diameter thin-cloth-covered circle) before they zipped away.  I did finally manage to find one bee so focused on pollen that I got one nearly decent photo before it noticed me.  Most of the time, however, the pollinators left before I got anywhere close.

As I approached one flower, the small bee on it flew away, but I noticed something else still on the flower.  When I got close enough, I realized it was a spider – apparently hoping to make a meal of the bee I’d inadvertently chased away.  While I felt a little bad about that, I thought maybe the spider would make a more accomodating photo subject, so I got out my diffuser and tripod to see what I could do.  The spider scooted off the top of the dandelion flower when I got close, but it only retreated as far as the stem of the flower, so I did get a few shots of it there.

A spider on a dandelion flower stem. Moments before it had been stalking a small bee on top of the flower, but a clumsy photographer scared the bee away.

The spider then (very quickly) scuttled a few inches away from the flower and stopped again.  If I hadn’t seen it move, it would have disappeared completely against the background of the identically-colored prairie thatch.  Beautiful camouflage!

The same spider as above, showing off it’s perfect camouflage coloring against the grass litter.

I sure wish I’d gotten to see the spider try for that bee.  I’m not sure what kind of spider it was, but it certainly wasn’t a crab spider, which is what I typically see hunting on flowers.  This one looked more like an active hunting spider (similar to a wolf spider) than a nearly blind ambush spider  (such as a crab spider).  I’m guessing prey isn’t overly abundant at this time of year, and its probably hard to turn down an opportunity to hunt in one of the few places you’re pretty sure to find it.

Dandelions might not be everyone’s favorite flower, but I’m sure glad to have them in my prairie in the early spring.  Apparently, so are quite a few bees and flies – and at least one enterprising spider!

15 thoughts on “A Dandy Little Predator”