Prairies demonstrate their resilience regularly, but usually in a fairly subtle way.  They tend to adjust their plant composition after fire, grazing, or drought in ways you might not notice unless you were a botanist.  Once in while, however, prairies take it to the next level and really show off. 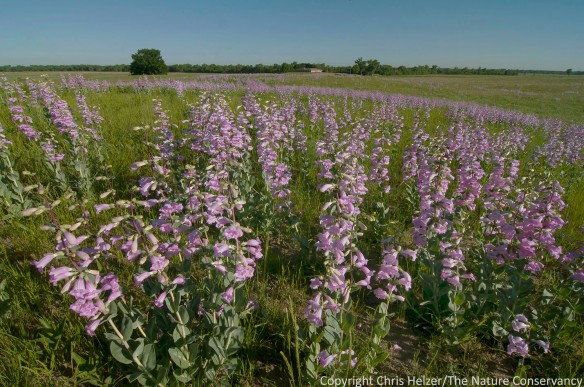 A profusion of penstemon in restored sandhill prairie at The Nature Conservancy’s Platte River Prairies.

Last year was the driest year on record for this area.  We had less than half of our average annual rainfall, and most of that came early.  By late August, very little green was left in most of our sites.  The prairie shown above had been burned in the spring and grazed most of the season.  Many people seeing it for the first time would have assumed it was dead and gone (see photo below).

This is the same portion of prairie shown in the first photo, but this images was taken August 24, 2012 after a year of fire, grazing, and severe drought. Most of the green in the photo is western ragweed and a little goldenrod.

I’ve written about the ecological resilience of prairies before, and have presented long-term data showing how our prairies fluctuate in plant composition over time in response to drought, grazing, fire, and various combinations of those factors.  Many plant species rise and fall in abundance as conditions change (opportunistic species) and others tend to maintain a steady population size, though they may be more or less visible in particular years.  It’s one thing to see that in graphs and tables, but it’s also fun to see a spectacular green-up and explosion of wildflowers in person, especially after a long dry (brown) year.

In the sandhill prairie shown above, last year’s drought caused most of the perennial plant species to enter dormancy by July – effectively giving up on that season’s growth and reproduction potential and saving their remaining energy for the next year.  Before they went into dormancy, however, the perennial grasses had already been weakened by relatively intense grazing, reducing the size of their root masses and opening up space for opportunistic species to take advantage of.  One of those opportunistic species is the short-lived perennial shell-leaf penstemon (Penstemon grandiflorus) which is obviously thriving this season.  Shell-leaf penstemon has been generally increasing in abundance since this prairie was seeded in 2002, but it took a gigantic leap forward this year.  Based on what I’ve seen in other prairies, I expect it to decline in abundance over the next couple of years as the dominant grasses and other long-lived perennials recover from last year’s stress.  In the meantime, we’re happy to enjoy the prairie’s flamboyant demonstration of resilience.

Junegrass (Koeeria macrantha) is also having a great year, and provides a beautiful counterpoint to the penstemon in this photo.

If you’re in the area, now is a great time to come hike our trails.  Both the upland and lowland trails through the Platte River Prairies cut right through huge patches of penstemon.  If you’ve never been to our trails, you can find directions and more information here.

The mowed hiking trail through the sandhills takes you right through penstemon profusion this season.