Influencing Resilience through Restoration and Management

Understanding ecological resilience should help us better design restoration and management strategies that build and maintain resilience in prairies.  Using the components of resilience discussed in Part 1, it seems apparent that when restoring (reconstructing) prairies, it’s important to maximize species diversity in seed mixtures.  More importantly, prairie restoration that adds to the size and connectivity of existing prairie remnants should make the entire complex of restored/remnant prairie more resilient (see earlier post on this subject).  Finally, selecting and altering restoration sites, when possible, to include topographic and other habitat type variation – and multiple examples of each type – can also help ensure the resilience of the resulting restored prairie.

Designing management strategies for prairies that sustains ecological resilience is trickier because we still have much to learn.  We’re far from fully understanding the various stable states prairies may exist in, or flip to, let alone where the thresholds are between those states.  In addition, the level of plasticity, or range of adaptive capacity, of prairies is a subject of great debate right now among prairie ecologists – although the discussion is not usually framed in those terms.  The real question is – How much can prairies change their plant and animal species composition and still remain “in the bowl”?

As an example, I manage a sand prairie that was hayed annually in the mid-summer for about 20 years before The Nature Conservancy purchased it in 2000.  Over that 20 year period, the plant community in that prairie adjusted to that annual haying regime.  Species such as stiff sunflower, leadplant, and sand cherry became restricted to a few steep slopes where hay equipment couldn’t go.  Early summer grass and forb species became very abundant, but later season flowering plants were less so because they were mowed off around their flowering time each year.  The prairie was a nice quality mixed-grass prairie, with good plant diversity, but definitely had the “look” of an annually-hayed prairie. 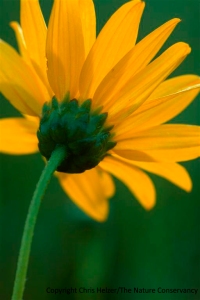 Stiff sunflower has increased in abundance since annual haying ceased.

When we took over the management in 2000, we let the site rest for about 5 years and burned portions of it each year during that time.  Then, we began introducing some combined fire and grazing treatments at different intensities and at varying times of the season.  As a result, the prairie looks fairly different now.  Stiff sunflower and leadplant have spread considerably through the site, re-taking lower slopes where hay equipment had earlier eliminated them.  Cool-season grasses (native and non-native) change in abundance from year to year, but warm-season native grasses are certainly more dominant than they previously were.  Overall forb diversity is about the same as it was, but the relative abundance of many forbs has changed, and those abundances now vary from year to year, rather than remaining fairly stable.

In the context of plasticity, or adaptive capacity, this prairie has demonstrated that the 20 years of haying was not enough to move the plant community into a new stable state from which recovery, if that’s the right word, was not possible.  The community was altered by that haying regime, but upon alteration of that regime, the community composition morphed to match changing conditions – without losing plant diversity.  In other words, assuming that the prairie hasn’t lost anything critical during the 11 years of our management, both the haying regime and our current management have kept the prairie “in the bowl”, though it changed appearance fairly dramatically.  Its adaptive capacity is broad enough to include the “hayed” look and the “crazy Nature Conservancy management” look.  The real test of this, of course, would be to reintroduce haying for another 20 years and see if the plant community reverted back to something very similar to the condition it was in when we purchased it. 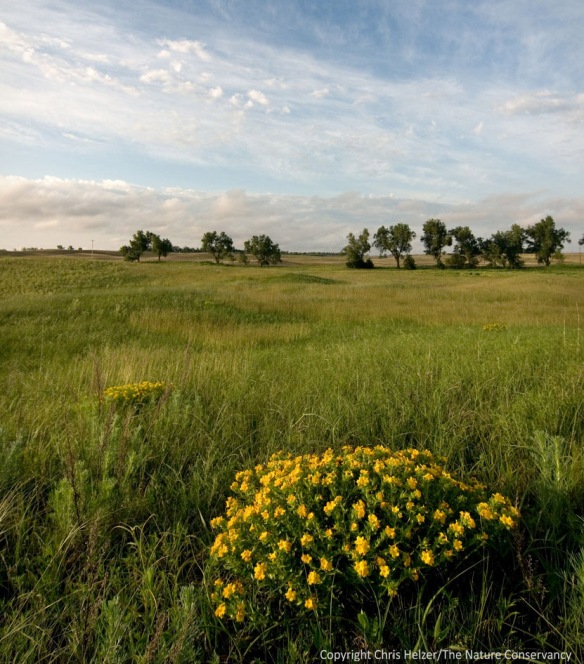 This sand prairie has changed species composition substantially since we switched management from annual haying to a mixture of prescribed fire and grazing.

Here’s another example from my own experience.  We have a 45 acre restored prairie (prairie reconstruction) that was seeded in 1995 by Prairie Plains Resource Institute adjacent to a degraded remnant prairie.  The seed mixture included approximately 150 species of mesic prairie plants, most of which established successfully.  We managed the prairie with periodic spring fire for its first seven years, and then incorporated it into our experimental patch-burn grazing system (light stocking rate).  During nine years of patch-burn grazing management, (6 of which were during a severe drought) the plant species composition in any one place has bounced around quite a bit due to the fire/intense grazing/rest cycles imposed by the patch-burn grazing management system.  Overall, however, the prairie has maintained its mean floristic quality within 95% statistical confidence intervals (I collect annual data which entails calculating floristic quality within 100 1m2 plots and averaging the values across those plots).   Read more about our patch-burn grazing work and results at this restored prairie and others here.

That’s not to say the prairie hasn’t changed – it has.  Some plant species have increased in frequency among my annual data collection plots, some vary in frequency from year to year, and others stay fairly stable.  However, no species has dramatically declined over the time period.  (I wish I had data on other species, particularly insects, but I don’t.)  Perhaps the most interesting, and somewhat concerning, phenomenon has been an increase in the frequency of Kentucky bluegrass in my plot data.  The increase has been fairly steady over the nine years of patch-burn grazing and data collection, and bluegrass is now in about 75% of my 100 1m2 plots, though it rarely looks dominant where it occurs.  To this point, that increasing frequency doesn’t seem to be impacting the overall diversity or floristic quality of the plant community, but that doesn’t mean it won’t at some point.  Two possibilities are: 1) Our management is allowing bluegrass to enter the plant community but remain a minor component, or 2) Kentucky bluegrass is on a steady march of increasing dominance and will eventually turn my restored prairie into the same kind of low-diversity degraded prairie that exists in the adjacent remnant prairie.  I won’t be completely shocked by either scenario, but I have hope that #2 won’t happen because of the way bluegrass is acting in the community to this point.  It’s way too early to know for sure.

Interestingly, I have some large exclosures within this restored prairie that have never had grazing, only prescribed fire at a similar frequency to the grazed portion.  Those exclosures have very little Kentucky bluegrass in them – probably because of both the differing management and the fact that the exclosures are on the far side of the restoration from the neighboring bluegrass-dominated remnant prairie.  However, the exclosures also have much lower plant diversity and mean floristic quality than the grazed portion of the restored prairie.  Visually, they are dominated by warm-season grasses and a few large forbs (e.g., perennial sunflowers).  At this point, I prefer the grazed portion of the prairie because it seems to line up better with my management objectives of maintaining diverse and resilient plant communities (assuming it’s not slowly becoming a bluegrass wasteland). 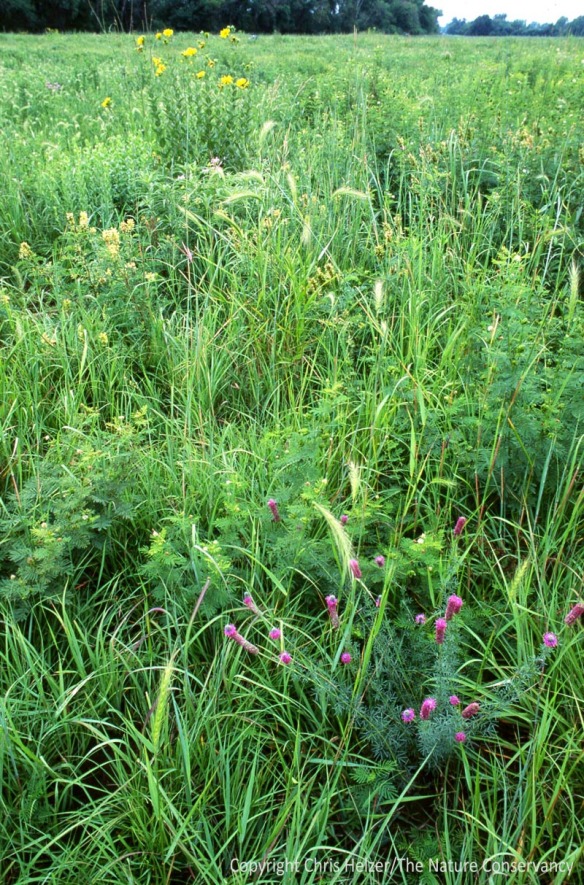 This photo was taken when the 1995 prairie seeding was nearing the end of its establishment period (fifth growing season). The prairie has maintained its mean floristic quality (and all of its plant species) through years of patch-burn grazing and drought.

To relate this example back to adaptive capacity, it appears likely that the grazed portion of the restored prairie has the adaptive capacity to retain its integrity as a prairie community through fairly wild fluctuations in species composition as a result of stresses from fire, grazing, and drought.  This is, again, remembering that I’m only evaluating the plant community and that the experiment is far from over.  On the other hand, it appears the exclosed portions of the prairie have lost plant diversity over time.  Whether the communities in those exclosures are still “in the bowl” or in a new stable state of lower diversity is a big question.  To address it, I’m going to open one of them to fire/grazing this coming year and exclude a portion of the currently-grazed prairie and see what happens.  If the two plant communities trade identities to match their new management regimes, I’ll know that both were still “in the bowl” and understand more about the adaptive capacity of our prairies.  If they don’t, that will be equally instructive!

Building and sustaining ecological resilience in prairies may be the most important component of prairie conservation in the coming decades.  Threats from invasive species, habitat fragmentation and detrimental land management practices, compounded by climate change, will make conservation extremely difficult.  Armoring prairies with ecological resilience gives us the best chance of success.

In order to build that resilience, we first have to understand it better.  It is certainly more complex than the few simple examples I’ve provided.  There are numerous belowground processes and systems we still know relatively little about.  Even aboveground, there are many more questions than answers regarding the way species interact with each other and their environment – and what is required to maintain those interactions.  To gain a better understanding of these natural systems, we have to rely on experimentation and observation.  I think there are essentially two broad questions:

We can work toward answering these questions with direct experimentation on prairies we manage (similar to my simple experiment with grazing and exclosures in the restored prairie example presented earlier).  In addition, though, we can learn much from prairies that “flip” to less desirable stable states (hopefully not the ones we’re managing!) by documenting as much as we can about what happens to them and why.

Most importantly, I hope that thinking about ecological resilience with regard to prairies will make you look at the prairies you’re familiar with in a new way.  Seeing prairies as balls rolling around in a bowl makes watching and managing prairies a much different experience than seeing them as a stable “climax community.”  When we expect change, it’s easier for us to perceive change, and the more observant we are, the more we’ll learn.  And goodness knows we have plenty to learn.

If you’re interested in learning more about ecological resilience, here are some relevant references that Craig Allen recommends (I’m pretty sure it’s just a coincidence that he’s a co-author on all of them).  The Gunderson et al. book reprints a lot of the classic / foundational papers on the subject.

Forys, E. A., and C. R. Allen.  2002.  Functional group change within and across scales following invasions and extinctions in the Everglades ecosystem.  Ecosystems 5:339-347.