We recently completed a large multi-year restoration and management project at our Platte River Prairies.  Our specific objectives were to improve habitat quality for various at-risk prairie species and evaluate the impacts of our management on at-risk butterflies – particularly regal fritillaries.  The project was supported by the Nebraska Game and Parks Commission, who funded our work with two State Wildlife Grants (U.S. Fish and Wildlife Service money).  Over five years, we conducted fire/grazing management in our prairies and enhanced plant diversity through overseeding and seedling plugs.  We measured the results of that work by measuring changes in prairie plant communities and by looking at the use of our prairies by regal fritillaries and other butterflies.

We’ve worked hard to get plant diversity in our restored prairies, including this one.  We wanted to know whether or not our management was maintaining that diversity, and also how it was affecting butterflies.  The prairie shown here was being grazed at the time of the photo – July 2009.  The Nature Conservancy’s Platte River Prairies, Nebraska.

The following is a brief summary of the major lessons we’ve gleaned from the fire/grazing component of the project, including implications for future management and restoration work.  I will summarize the overseeding/seedling work in a separate upcoming post.  If you want more details, you can see our entire final report to the funding agencies here.  As a warning, the report is 14 pages long, with an additional 21 pages of Appendices, full of tables and graphs.

What We Did
Between 2008 and 2012, we treated over 1,500 acres of prairie with varying applications of patch-burn grazing management.  During that time, we altered the timing of burning and the intensity of grazing from year to year, and included years of complete rest from grazing in some prairies.  For the purposes of this project, we evaluated the results of our work in two main ways:

–          We measured changes in plant diversity and mean floristic quality.

–          We conducted three years of butterfly surveys to evaluate how regal fritillaries and other butterfly species responded to our restoration and management work.

END_OF_DOCUMENT_TOKEN_TO_BE_REPLACED

Why is sweet clover the target of aggressive control by some prairie managers and largely ignored by others?  After talking to a number of people across the Midwest and Great Plains, I think there are a couple of things happening.  First, the usually biennial sweet clover can be very abundant and showy in the years it blooms, but is harder to find in other years.  I think some prairie managers see those big flushes and mistake abundance for aggressiveness.  However, I also think that some soil/precipitation/latitude(?) conditions may lead to real negative impacts from sweet clover on plant diversity.

One of the lessons that’s been strongly reinforced for me this summer is that it can be difficult to extrapolate successful prairie management/restoration strategies from one region to another.  Just during the last several months, I’ve visited prairie managers in Nebraska, Indiana, Missouri, and South Dakota and I’ve seen tremendous variation between (and even within) those states in terms of which species are invasive and which are not.  It’s dangerous to assume that just because a species like sweet clover isn’t causing problems in one prairie, it won’t cause problems in another.  I hope we’ll eventually learn enough to accurately predict when to worry and when not to, but in the meantime, it behooves prairie managers to carefully evaluate species at their own sites. 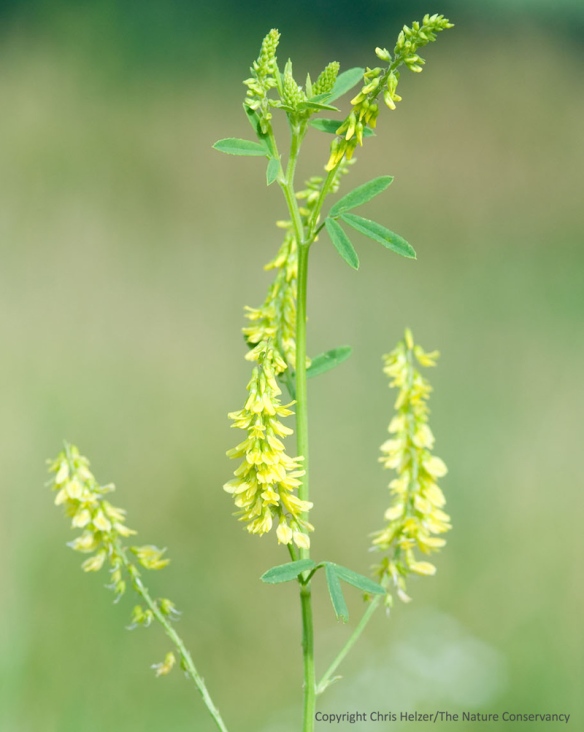 Yellow sweet clover. This exotic species is still planted in some wildlife and ground cover grassland plantings because of its purported wildlife value and cheap seed. However, it appears to be invasive in some places and/or situations.

I’ve been working with prairies along Nebraska’s Platte River for nearly 20 years now, and my observations have led me to conclude that sweet clover is more of a big ugly plant than a true invasive species in those prairies.  Years of data collection on my plant communities support those observations.  That annual monitoring work entails listing the plant species I find in each of about 100 1m2 plots across a prairie.  Those plots are stratified across the prairie so the site is evenly sampled.  Once I have those plotwise species lists, I calculate the floristic quality  (FQI) inside each plot, a calculation that takes into account both the number of species present and the average “conservatism” value of those species.  I can then look at changes in mean floristic quality over time to help me see how the plant community changes over time.  I monitor a few prairies annually, and others on a periodic basis.

Those data show the same thing I’ve seen observationally – sweet clover changes in abundance from year to year (though not as much as it appears visually), but the species doesn’t increase in abundance over the long term and doesn’t appear to negatively impact floristic quality.  Below are graphs from three sites that show both sweet clover frequency (% of plots occupied by sweet clover) and mean floristic quality.  Two of those sites were annually grazed during the data collection period, and the other was only grazed once – toward the end of the sampling period.  Cattle grazing almost certainly helps control sweet clover because it is one of their favorite plants to eat, but I don’t think sweet clover is causing me problems where I don’t graze either.

What my data don’t show is the flush of tall blooming plants that happens every other year or so.  I’m just counting whether at least once sweet clover plant is present in each of my small plots – not how big it is, or whether or not it’s blooming.  Nevertheless, sweet clover frequency changes from year to year but doesn’t appear to correlate at all with changes in mean floristic quality. 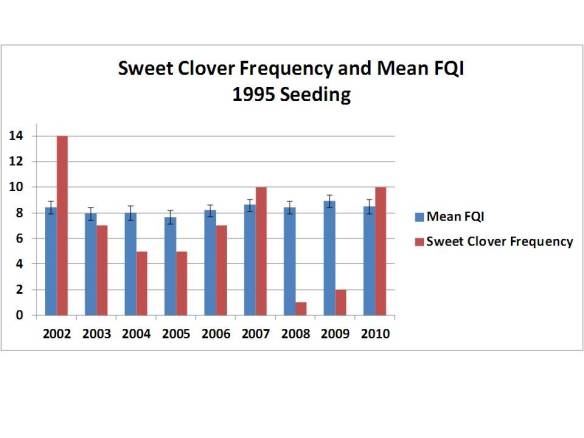 Nine of years of annual data from a 1995 prairie restoration seeding. The site has been under patch-burn grazing during each of the nine years of data collection. Sweet clover is never abundant at this site, but has also not increased over time, even through years of drought and heavy grazing. Error bars for floristic quality indicate 95% confidence intervals. 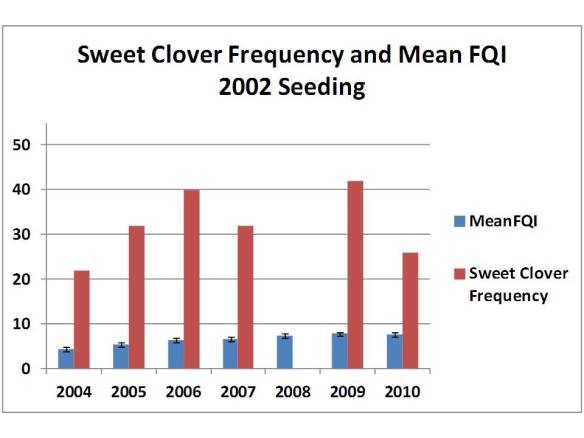 Sweet clover was present in between 22% and 42% of 1m plots in this restored crop field, planted in 2002. Though the sweet clover frequency varied from year to year, the mean floristic quality of the plant community increased between 2004 and 2008 before leveling off after that - apparently independent of sweet clover. Sweet clover data from 2008 was eliminated from this graph because I later questioned whether I'd confused black medick and sweet clover in some plots. This site was not grazed except in 2009. 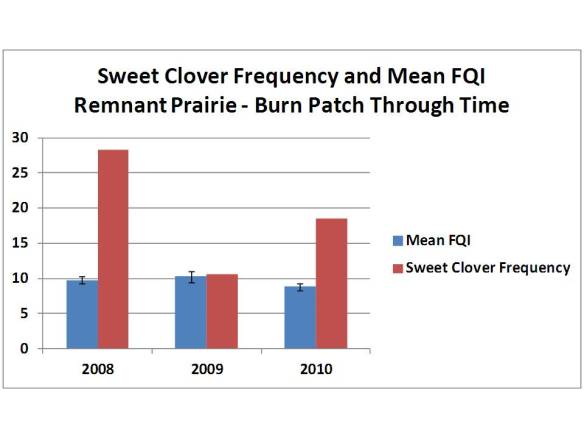 I feel pretty good about ignoring sweet clover and focusing on more invasive species on our prairies.  Both my observations and data support that strategy.  However, as I said earlier, just because the species doesn’t appear to be problematic for me doesn’t mean it isn’t an invasive species in other prairies.  It’d be great if we could compare data similar to what I’m presenting here from a number of sites to see if sweet clover is acting differently in different places.  Without data, it’s hard to know whether or not people are just interpreting the “invasiveness” of sweet clover in different ways.  For now, my answer to the question,  “Is sweet clover really invasive?” is still the same…