As I mentioned last week, recent ice jams on the Platte River caused some flooding in some of our prairies.  I was able to photograph the flooding from a couple perspectives.  On February 5, we got some aerial footage with our drone, and then late last week, I walked through some of the flooded area after most of the water had receded. 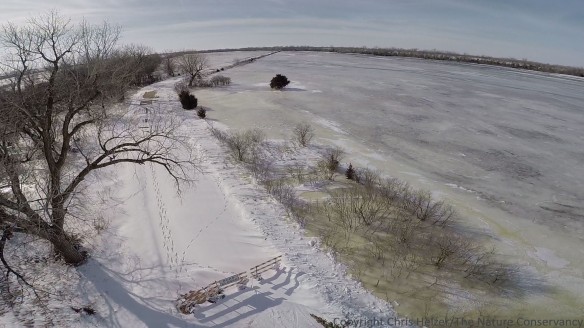 This road was closed due to flooding. Everything to the right (north) of the road is prairie.

Another shot of the same area from higher up.  The river can be seen at the very left edge of the photo.  A windmill can be seen in the prairie near the right edge.

This was and will be an ecologically-interesting event from several standpoints.  Floating ice and ice jams have been an important component of the Platte River ecosystem for a very long time.  Ice likely played a critical historic role by helping to scour vegetation from sandbars, allowing that sediment to be carried off and deposited elsewhere, and creating valuable habitat for many species – including the ducks, geese, cranes, and other water birds that pass through during migration.  Today, we see much less of that scouring and many sandbar islands and banks have become relatively permanent and covered by trees and other perennial vegetation.

River water flowing through prairie.  Most Platte River floodplain prairies still have their river-formed topography of sloughs (old river channels) and ridges (old sandbars).  During the flood, many of those sloughs became active (albeit temporary) river channels again.

Before the Platte River’s channels were stabilized and restricted to their current locations by human activity, ice jam flooding might have been an important driver of the shifting of channel locations over time as well.  This year’s flood created new river channels through floodplain prairies and woodland, but as the water receded, it returned to its stabilized channels.  Historically, the river was a broad series of braided channels, and flood events would have changed the shape and location of those channels frequently – though I don’t know how important ice jams were relative to annual high flows from Rocky Mountain meltwater.

I have a few predictions about how this year’s flood will impact prairies, but they are just educated guesses….

The grasslands that were covered by water for a few weeks will get a boost in their soil moisture for this upcoming season.  We’ve had a relatively dry winter, so that soil moisture should create some very different growing conditions for plants in flooded versus non-flooded prairies.  Depending upon a number of variables, flooded areas might also retain more standing water in sloughs, creating valuable habitat for many wildlife species.

Floodwaters carried grass and other debris into fences and pushed them right over.

The flooding carried more than just large chunks of ice out of the river and through the prairies.  It also picked up and carried downed trees and branches, along with other assorted buoyant objects, natural and man-made.  In addition, the ice and water scraped vegetation from some places and deposited it elsewhere.  We burned a portion of prairie last year and left it ungrazed as a seed harvest site, so it was covered in tall big bluestem and other grasses.  The ice essentially shaved some of that area as it came through, scraping away most of the standing vegetation and leaving behind a site that now looks as if it had been intensively grazed.  That shaved off grass was deposited further downstream along obstacles (such as fences) and in high spots as the water levels dropped.  As a result, some areas of prairie are now covered by a foot or so of fairly dense thatch.  It will be fun to watch how that thatch affects vegetative growth and wildlife use.

This area was burned last spring and ungrazed.  Before the flood, it was a stand of tall dense big bluestem and other tall grasses.  The ice and water essentially shaved the tall stems and leaves off and carried them away.

This Canada goose decoy appeared to view its new surroundings with equanimity (look it up, Dillon) after being deposited by receding flood waters.

A second decoy looked a little less at ease.

This layer of flood-deposited thatch is about a foot thick.  It will be interesting to see what impact it has on vegetation beneath it.

I’m guessing most of the impacts of this flood will be positive, or at least interesting, from a land management standpoint.  One exception is that we’ll have some fairly major fence repair to do this spring.  A bigger concern is a potential influx of invasive plants carried in to our prairies as seed or vegetative material from the river.  Phragmites, reed canarygrass, and purple loosestrife are probably the most likely and potentially serious invaders, but others such as Canada thistle, salt cedar, and Russian olive are also possible.  We’ll need to be vigilant over the next few seasons to make sure we catch new populations of those invaders before they can become well-established.

Ice fields like this make it difficult to travel across the prairie and get a full picture of what was flooded and what wasn’t.

Once the remaining ice melts away,  we’ll get out and explore more of our flooded areas.  After we have mapped out (at least generally) the boundaries of the flooded areas, we’ll watch and evaluate what impacts the ice and water actually have on the prairie this season and beyond.

And then we’ll  see how good my predictions are…