Nebraska has 108 species of grasshoppers.  They come in a wide variety of sizes, shapes, and colors, and generally speaking, the further west you go in the state, the more species you can find.  While on a short trip to the Nebraska Sandhills last week, I was fortunate to see two of the most beautiful of Nebraska’s grasshopper species. 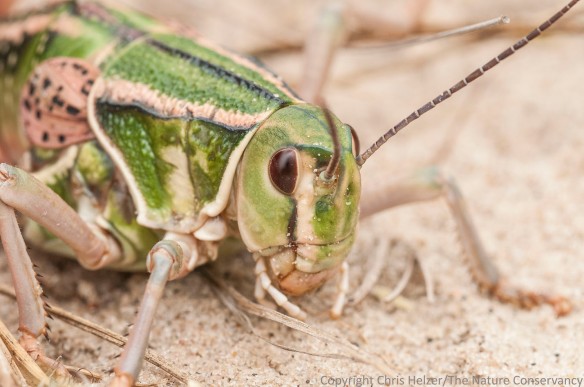 I saw several plains lubber grasshoppers (aka homesteaders) in the prairie.  These huge flightless grasshoppers are about the size of mice (more than two inches long, and very thick).  They feed primarily on wildflowers, including sunflowers and hoary vervain (Verbena stricta).  According to Grasshoppers of Nebraska, they are not crop pests but in years when their population soars, they can present a hazard to drivers because their bodies can make roads slick.  Think of that!

Here is a plains lubber on its favorite (according to some sources) food – an annual sunflower (Helianthus petiolaris).  Cherry County, Nebraska.

I also enjoyed the chance to see a painted grasshopper (Dactylotum bicolor), a species I first noticed last year on a trip to western Kansas.  This gorgeous creature might be the easiest grasshopper in Nebraska to identify – as far as I know, there isn’t anything else in the state that looks remotely like it.  Like the lubber, the painted grasshopper eats primarily wildflowers, particularly false boneset (Brickellia eupatorioides).  It likes habitat with lots of exposed soil, which is convenient for those of us trying to find and photograph them.

A painted grasshopper at the Valentine National Wildlife Refuge. Nebraska.  The colors and patterns on this species make it impossible to confuse with others.

Grasshoppers, and katydids, which look like grasshoppers but have much longer antennae, are a fascinating group of insects.  They have interesting and complex communication strategies and each species has its own set of dietary preferences – some are specialists on just a few plant species and others are generalists.  Only a very few are considered to be pest species, and most of those are simply native species that have adapted well to the abundant food humans provide in the form of monoculture row crops.

Perhaps most of all, the sheer abundance and biomass of grasshoppers make them ecologically important in grasslands.  If you collected all the grasshoppers from a prairie, their biomass would equal that of the bison or cattle in the same prairie.  As such, they are a major food source for many other species, including many birds, and major herbivores that influence plant communities in complex ways.

Grasshoppers are also very visually appealing if you take the time to look closely at them.  The plains lubber and painted grasshopper are particularly pretty, but every grasshopper species has its own beautiful combination of colors and patterns.  Go out and find your favorite today!