Before and after sunrise…

Back in July, a small group of us got up early to do some prairie photography.  We were attending the Grassland Restoration Network workshop in northwestern Minnesota and wanted to catch the sunrise at The Nature Conservancy’s Bluestem Prairie.

We arrived at the prairie before sunrise, split up, and walked off in different directions, searching for photo opportunities.  Not far into my hike, I found a monarch butterfly roosting on a milkweed plant.  It was cold and wet and not able to move.  The sun wasn’t up yet, but there was nice color in the sky where the sun would appear in just a few minutes.  That sky glow provided enough illumination and color for me to take a few good photos of the monarch before I moved on to see what else I could find.  Before I walked away, I made note of the location so I could circle back later if I had time.

About twenty minutes later, the sun was up and I was wandering back near where I’d seen the monarch earlier so I stopped to see if it was still there.  It was, and the rich golden light from the sun was hitting it squarely.  I took some more photos . 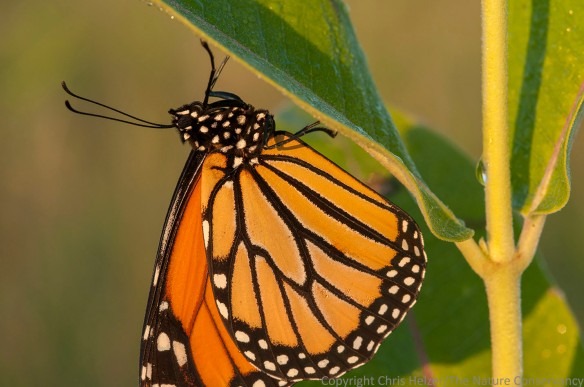 These are just two of the images I shot of this butterfly that morning, but they are a good pair to use for comparison.  Both are nice photographs.  The first is a little flat, but has just enough color and definition of detail to make it work.  While not as flashy as the second photo, it accurately depicts the subtle beauty of the pre-sunrise world.  The second photo literally sparkles in comparison – every hair, scale, and droplet of water reflects the bright golden sunlight coming from the big orange sun behind me.  The details are much more defined, and it is a stronger visual image.

I’d guess that in a poll, most viewers of these two images would say they like the second better, but I bet there are a few of you who prefer the first.  (And if I hadn’t shown you the second, most of you would probably think the first is a very nice shot.)  I like them both, and am glad I took the time to circle back and get the second set of images.

In photography, light is nearly everything.  Composition is subjective, and it’s always interesting to see how different photographers frame the same scene.  The ability to recognize and use various lighting conditions, however, is what separates good photographers from the rest.  I can’t draw worth a lick, and I stick to very simple and safe color combinations in my clothing because I don’t have any aptitude in those regards.  I can see light, though, and am very grateful for that.  It makes the world a really interesting place to look at and photograph!