This post is written by Katharine Hogan, one of our Hubbard Fellows.  Katharine hails from Vermont, but came to us with broad experience from across much of the country and a strong interest in restoration ecology.  As you can tell from her writing, she is bright and introspective, and a keen observer of the natural world.

During the hottest part of the summer, I found myself drawn outside late one night by an almost strobe-like flashing outside. Upon walking out onto the lawn, I saw two massive storm systems, one to the west and one in the north. Both were lit up with the almost constant flare of purplish lightning from within and around the heavy clouds. There was no thunder to be heard at that point, and the night was still; even uncannily quiet considering the diversity of life surrounding me in the prairies and river bottoms. The only readily apparent signs of animal life were fireflies dancing by the hundreds over the lawn and in the prairies across the road.

As I sat on the grass watching the lightning and the fireflies and enjoying the comparative drop in temperature, I looked up and realized I wasn’t as alone as I had assumed. On top of a nearby telephone pole sat a great horned owl, silhouetted dramatically by the lightning. We both stayed in our respective positions for some minutes, me watching the storms and the owl presumably watching the world of small rodents and prey that lay entirely beyond my perception. It sat perfectly still, until it almost lazily spread its wings and dived across the road into the vegetation. I found myself wondering if this predator had similar awareness of the storm as I did, and if it did, did it care in the least? Did the storm impact its life and hunting habits in any way, or did it take it all in stride (or wingbeat) as business as usual?

Upon reflection, I think that, in the long run, it sometimes doesn’t matter what storm is about to hit. The larger than life scheme continues on, and is affected less than we might initially think by those disturbances that throw off our normal, comfortable rhythms. Prairies embody this resilience in perhaps more ways than the ecosystems in which I’m used to spending time. In forested Vermont, land becomes more valuable as wildlife habitat as disturbances wane and the trees mature over decades. The Pacific northwest temperate rainforests progress similarly across an even longer time frame. The balance of the deserts in which I’ve spent the most time are even more fragile. Once burned or pushed out by invasive vegetation, native plant communities are hard pressed to recolonize, especially with the increasingly drier climate trends in those regions.

Prairies, however, march to an entirely different drummer (the drumming of prairie chicken wings, maybe?). They thrive on complex patterns of multiple types of disturbance. Grazed short? Not a problem, those species will redistribute their energy pathways and wait for the opportune time to regrow. Burned to the ground? Different species will return for the first time in a few growing seasons with renewed vigor. The annual sunflower (Helianthus annuus) on the Platte River Prairies hasn’t gotten this far by maintaining stability; H. annuus and a myriad of other annual “weeds” come and go as the opportunities of the moment so allow them. Even the severe drought of 2012 didn’t hold the prairie community back significantly; plant populations suffered losses for a time before building up their numbers again.

I have a tendency to overanalyze and get caught up worrying about potential outcomes at the expense of the moment’s opportunities. Like other aspects of my life, this is a work in progress. That hot summer night, from the thought processes inspired by watching the nonchalance of that great horned owl in the face of the massive power and potential destruction of the storm, I realized that the prairie has some valuable life lesson to offer in those regards. It’s okay to experience setbacks, even ones that at the time seem overwhelming. The time for recovery and much of our growth is after those stormy times that can knock down everything beneath them, and not so much in the presence of stability. It’s okay to feel like you just watched all your efforts go up in flames; those efforts have roots underground that will survive and come back when times change. It’s okay when it feels like the world is not giving you much to go on, rain will return and there will be newer, more lush growth than before.

This is what the prairies say to me when I find myself getting caught up with questions from the past and the unknown outcomes of the future. May the unhurried resilience of the prairies help us to sit back, relax a little and enjoy the present for everything that it has to offer. After all, this is the only place we can ultimately ever truly be, and the only time in which we grow.

Thanks for reading! I will leave you all with a sketch I adapted from one of the remarkable photographs of Michael Forsberg, from his book On Ancient Wings (page 104). 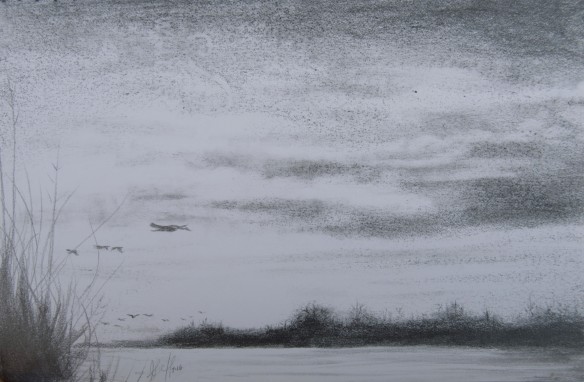 Cranes over the Platte River – adapted from a photo by Michael Forsberg.  (That strange “S” in the sky is from the impression of the manufacturer’s watermark on the paper, in case anyone was wondering why I decided to invent a new type of cloud.)

11 thoughts on “Hubbard Fellowship Blog – The Zen of the Prairie”