I was at our family prairie for a while last weekend, checking on grazing progress and generally catching up on what’s been happening.  There were several highlights of the trip, but one big one was that I saw LOTS of bush katydids.  Apparently, they had gone through their final molt to adulthood recently because they were flying all around the prairie (nymphs don’t have functional wings).  They were flushing away from my feet as I walked, which was nice because then I could watch where they landed.  That was about the only way I could spot them because of their impressive camouflage.  During a couple hours on site, I was able to track and re-find enough katydids to get quite a few photographs (all the photos in this post were from the same evening).

Katydids are similar to grasshoppers, but are in different suborders (meaning they split off fairly high on the taxonomic tree).  If you’re of a certain age, or read older natural history books, you may have first learned to call them “long-horned grasshoppers”, but that’s a fairly outdated term nowadays.  Katydids are pretty easy to distinguish from grasshoppers by their antennae length.  Grasshoppers have short antennae, while katydids have very long threadlike antennae – usually longer than their bodies.

Bush katydids (Genus Scudderia) are one of several groups of katydids, and tend to have a very green leaf-like appearance.  They are so leaf-like, in fact, most of us probably walk past many more of them than we notice, despite the fact they are pretty big insects (often over 2 inches in length).

Males of these and other katydids make courtship “songs” by rubbing their wings together.  While we hear those sounds through the ears on our head, katydids hear sounds through tympanum located on their legs.

The dark oval on the leg of this bush katydid is the tympanum, or ear.

Here are more photos of bush katydids from last weekend.  I saw a lot more of them than I photographed…these are just the ones that sat still long enough for me to get within range (some of them flew a couple times before giving up and letting me take their picture).

Crickets and katydids, including bush katydids, provide much of the evening sound in prairies.  There are many websites that feature those sounds, but here is one that is set up pretty well to help you distinguish between the various species.  If you can’t find them by sight, maybe you can at least find them by ear!

I’ve written before about how many times I often snap the shutter on my camera to make sure I get the photo I want.  Digital photography makes that a cheap insurance option and gives me lots of images to choose from when I review them later.  However, I don’t always get the opportunity for multiple shots.

I had my camera out for a walk a few weeks ago, and while I was photographing a bee, I noticed a bush katydid on the prairie clover flower next to me.  I swung around slowly and squeezed off exactly one shot before it flew off.  As you can see from its camouflaged body, there was no hope of finding it again, so I had to move on.  I figured there was no chance the one shot I’d taken was sharp, well-composed, and correctly exposed for light, so I just forgot about it.  Imagine my surprise when I was looking through photos later and saw this…. 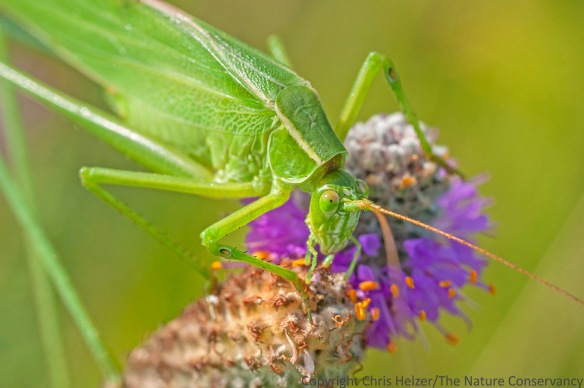 Sure, I could brag about my lightning quick reflexes and fast thinking, but the truth of the matter is that this image came from mostly blind luck.  I had been planning to take a series of images to get multiple angles and compositions of the katydid, but most importantly, to ensure that I got the eye in sharp focus.  Instead, I got one shot that just happened to turn out just fine.  I’ll take it!

Many of you, I’m sure, will remember information I’ve passed on previously about how katydids can be distinguished from grasshoppers by their antennae length and how they hear through the tympana in their “elbows”, but in case you’ve forgotten, you can read about that in a post from earlier this year.