The Chinese mantis (Tenodera sinensis) is an impressive creature.  Introduced to North America, it has certainly made itself at home here.  Entomologists I’ve talked to express varying levels of concern about the presence of the Chinese mantis – as well as the narrow-winged mantis (Tenodera angustipennis) and European mantis (Mantis religiosa).  Most would rather those non-native mantises not be here, but say it’s hard to find strong evidence that they are doing measurable harm to the ecosystems they’ve moved into.  If anyone knows of research that has defined the impacts of these non-native mantises I’d love to hear about it.

The Chinese mantis comes in either grayish-brown, green, or a combination of green and brown.

Regardless of impact, Chinese mantises are fascinating animals, as are our native mantises like the Carolina mantis (Stagmomantis carolina).   While I was out taking pictures last weekend, I ran across three different Chinese mantises and captured the images in this post.  I think they show some of the various attributes of these amazing (and possibly harmful) creatures.

Seen from underneath, the mouth of the mantis is really otherworldly.  Praying mantises can turn their head 180 degrees – a unique attribute among insects.  That ability helps them scan for both prey and predators.

This mantis was finishing off a skipper butterfly (a Sachem?) while hanging beneath the flowers of pitcher sage (Salvia azurea).

The “pupils” in the big compound eyes of mantids are actually pseudopupils, and are a trick of the light rather than an actual structure.  Look at the location of the pseudopupil in the earlier photo showing the underside of a mantis’ head…

The mantis in this photo is not looking in a different direction than in the above photo, but the angle of light hitting the eyes makes it look that way.

One additional attribute of praying mantises, especially the big ones, is that they are noticed by the general public, including kids.  I spent last Friday helping with a prairie-based field day for 5th graders, and my job was to get the students interested in invertebrates.  We used sweep nets to catch inverts, and the kids got to catch and hold grasshoppers, katydids, and spiders.  Moving kids from “Spiders are icky!” to “Ha ha – this spider tickles when it walks on my hand!” is a really important process.  If we want people to understand the value of invertebrates, they first have to see them as something other than icky.  In that regard, the absolute star of the day was a big Chinese mantis one of the kids found early in the day.  I kept it and showed it to each group of students I visited with during the day, and it never failed to get oohs and aahs from them.  Everyone got to touch it, and it was big enough that we could easily talk about it’s various body parts, how it hunts, etc.  As an ambassador for invertebrate kind, it was very effective.  An important gateway bug, if you will.

The praying mantis is an impressive predator, especially when it’s a Chinese mantis the length of a ball point pen.  The ones who live around here seem to have a particular affinity for sphinx moths.  I haven’t yet watched the capture take place, but I’ve seen the mantises (mantes? mantids? critters?) devouring their fuzzy prey several times, including one I photographed last year.  Almost exactly a year later, I took the following photos at the same prairie.

You can see from the photo how well this mantis can hide – it is exactly the same color as the pitcher sage (Salvia azurea) plant it was hunting on, and its shape and texture blend in perfectly.  Other mantis species around the world have even more sophisticated camouflage, which almost seems unfair. 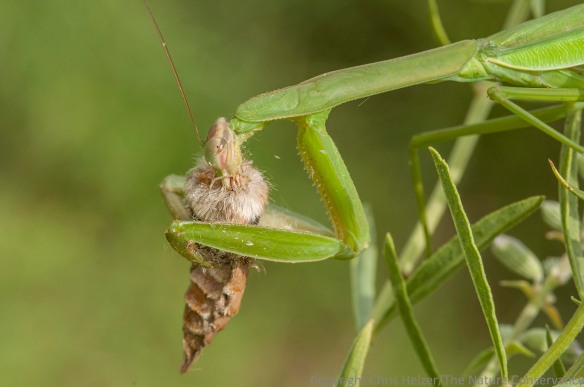 After watching the mantis for a little while, I decided to try out the video function on my camera.  I’ve been trying to do a little more video work lately anyway.  If you’ve always wanted to see watch a mantis eat up close – and who wouldn’t want to?? – here’s your chance.  The barking in the background is from the dogs in the nearby animal shelter who were apparently excited to watch a prairie ecologist take video of a praying mantis…

My favorite shot of the day was this last one.  There is sure a lot of personality in a mantis face…

“Just trying to eat here… do you mind?”

Chinese mantises are, of course, not native to the U.S., but as far as I can tell from bug-smart friends, don’t seem to be having any major negative impacts (neither are they providing the kind of “pest control” they are often introduced to provide).  Some introduced species have certainly become major ecological disasters, but it seems the Chinese mantis is just a new predator for prairie insects to watch out for, and for prairie enthusiasts to enjoy watching.

(Now would be the appropriate time for entomologically-savvy readers to correct my ignorance on the topic of the Chinese mantis and its impacts.  Please do.)