It’s been almost 19 years since I started my career with The Nature Conservancy as a land steward.  My job was simple: restore and manage several thousand acres of prairie, wetland, and woodland habitat.  When I started, I felt like I was the luckiest guy on earth.  I was also scared to death.  What if I messed up?  These were extraordinarily complex ecological sites and I was a 25-year old kid with only a college education and a sliver of real world experience.  I had lots of ideas but it was daunting to think about trying those ideas out without knowing they’d work.  Fortunately, Al Steuter, the Director of Science for The Nature Conservancy in Nebraska gave me some advice that helped me tremendously.  In essence, he told me to remember that prairies were incredibly resilient, and that nothing I did in one year (aside from tillage or broadcast herbicides) could ruin them.  That advice was incredibly liberating, and allowed me to start enjoying my work. 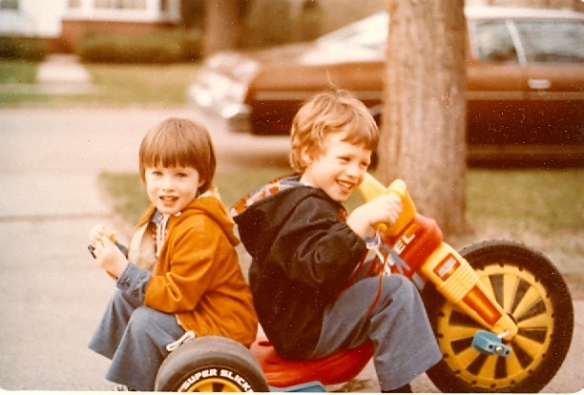 I was a very young-looking 25-year-old when I started as a TNC land steward. They weren’t sure I should have an actual ATV…

Over time, my responsibilities have changed and now, among other things, I serve as advisor to our statewide land management team.  I really like what I do, but land steward was my dream job and I can’t imagine I’ll ever find a better one.  However, as I think about the stewards I know and work with, I’m pretty sure I don’t measure up to today’s standards.

The job description for most land stewards in The Nature Conservancy – at least in the Great Plains – has expanded to the point of almost unattainable proportions.  As a result, it is no exaggeration to say that I am no longer qualified to be a land steward for this organization.  Most land stewards I know work by themselves or with a very small team – often consisting mostly of seasonal employees – and manage thousands of acres of land for biological diversity and wildlife habitat.  As a result, they have to be able to handle whatever challenge presents itself, from plant identification to small engine repair, and everything in between.  To give you an idea of the scope of that work, here is a partial list of what we expect of Nelson Winkel and Evan Suhr, land stewards who work for The Nature Conservancy in Nebraska. 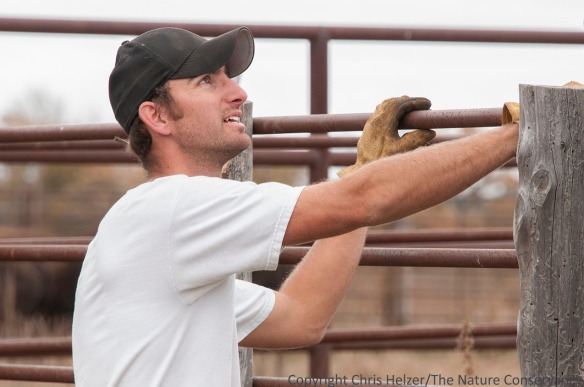 Evan and Nelson are expected to be able to identify most of the plant and animal species living in the prairies they manage and understand how they interact.  They also have to understand how all those species and interactions respond to various combinations of weather patterns and management treatments.  Obtaining just those skills could easily consume a career.

Good land stewards always look for ways to test the effectiveness of management strategies so they can keep improving their work – and provide guidance to neighbors and partners facing the same challenges.  Sometimes, that means collaborating with academic scientists on research projects.  More often, it just means setting up an invasive species control or grazing treatment in a way that provides a fair and impartial test of two or more methods.  The results of those tests don’t usually get published in peer-reviewed scientific journals, but in order for the results to be trusted, the tests have to be set up in a scientifically-rigorous way. 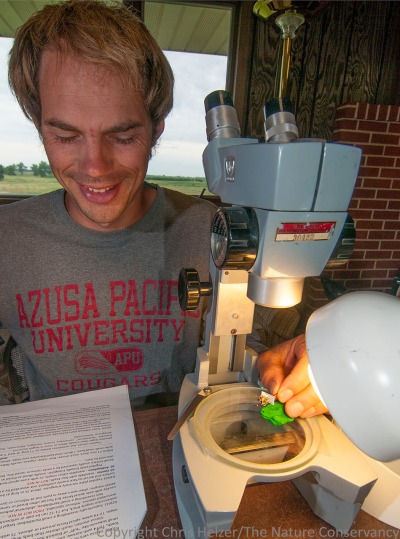 Nelson Winkel works to identify a bee during a pollinator workshop.  It’s important to understand the biology and ecology of the natural systems you manage.

Building and fixing fences, and repairing windmills and solar-powered pumps are frequent tasks for Evan and Nelson.  Even more frequent tasks include manual labor associated with invasive plants – chopping thistles, cutting trees, etc.  Some of those tasks require mainly hard work, but others require specialized knowledge (how to take apart, clean, and reassemble a pump, for example).  In addition, stewards have to stay current on agricultural topics from grazing lease rates to animal husbandry techniques so they can work effectively with Conservancy bison herds or the cattle (and their owners) grazing Conservancy land.

The number of engines involved in land stewardship is astonishing, including those found in trucks, tractors, skidsteer, ATVs, chainsaws, fire equipment, and more.  Land stewards have to be able to maintain all those engines, but also perform at least basic diagnostics and repairs.  When major repairs are needed, they can haul equipment to a professional mechanic, but if they needed professional help for every little mechanical malady, stewards would spend all their time hauling equipment to and from repair shops.  As someone who has never figured out how to correctly adjust a carburetor or do whatever it is you have to do to make a chainsaw actually start correctly when just pulling the cord doesn’t work, I have great admiration for those who have the skill, knowledge base, and intuition to fix engines.

Nelson can operate, maintain, and repair chainsaws.  If a saw goes down during the mop-up operation of a woodland prescribed fire, it’s pretty important that he be able to get it running again.

Since most land stewardship operations include buildings with plumbing and electrical systems (not to mention electric fences and livestock watering systems), and contracting for repairs in remote areas is usually infeasible because of cost, timeliness, or both, those repairs often fall to land stewards.  Replacing a broken light fixture, finding and repairing a leaky pipe in a house crawlspace, or troubleshooting a short in an electric fence are all tasks that could fall to land steward on any given day.

Much invasive plant control requires the application of herbicide.  The variety of brands and formulations of herbicides can be as overwhelming as the diversity of invasive plant species they help suppress.  Just reading and understanding an herbicide label can be a daunting task, let alone trying to understand how various chemical formulations might affect plants in a way that will kill the ones you want and not the ones you don’t.  Then, once you’ve figured out – for example – whether you should use the amine or ester formulation of a particular chemical (it’s related to risks associated with volatilization on hot days), you still have to calculate the correct amount of each ingredient and calibrate your sprayer. 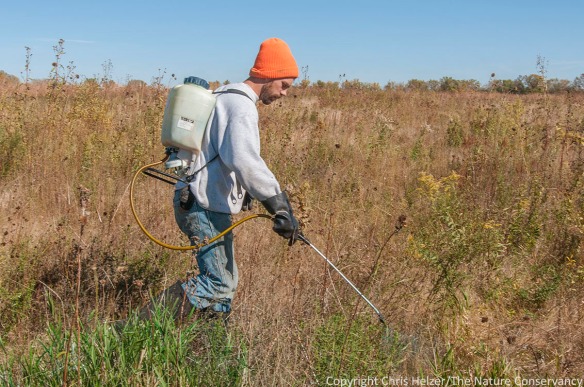 I am in awe of Nelson’s ability to make specialized tools and equipment for land management work.  Simple welding tasks seem overwhelming to me, let alone building herbicide sprayers, slip-on fire pumper units, and hydraulically-powered augers to dig holes for large fence posts.  Sometimes he builds his own equipment because it’s cheaper than buying it, but other times he does it because it’s not possible to buy something that does what he needs it to do.

Despite the fact that The Nature Conservancy is a private non-profit organization, becoming qualified to lead a prescribed fire for TNC now requires stewards to work through the NWCG (National Wildfire Coordinating Group) system used by federal agencies that fight wildfires.  Under a best case scenario, it takes several years to take all the courses and get signed off on all the required tasks (including some that necessitate fighting wildfires) to qualify as someone who can lead prescribed fires.  Accomplishing that means spending weeks at a time away from home.  Regardless, prescribed fire is a critically-important component of The Nature Conservancy’s work, so land stewards work through those requirements as best they can. 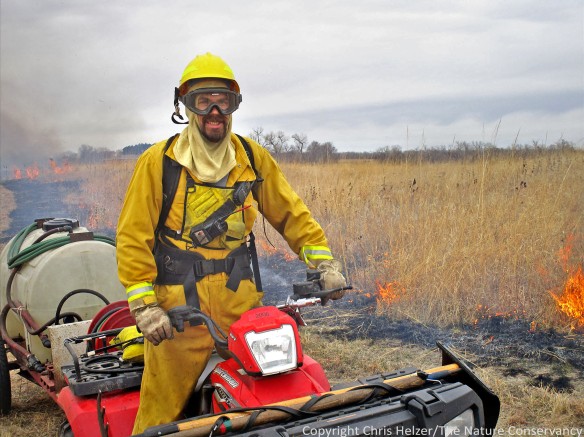 Prescribed fire is a big part of prairie management, but becoming qualified as a burn boss takes years worth of training and experience.

Land stewardship doesn’t happen in a vacuum.  All of our properties are nested within land owned by farmers and ranchers.  To be successful, land stewards have to get along with, learn from, and share ideas with those neighbors and other partners.  Often that leads to interesting situations in which a land steward is negotiating a grazing lease with a neighbor who also happens to be on the local fire board and can influence whether or not a burn permit is issued.  Gaining the respect of neighbors and other local conservation partners means taking the time to get to know them, their families, and their personal philosophies on life, conservation, hunting, and football.  Much of that relationship building happens outside of a regular work schedule, but it’s essential – we couldn’t do our work without the support of our neighbors and local communities.  More importantly, building credibility with neighbors and partners is critical because sharing lessons learned from our land management work with others is how we influence conservation beyond the borders of our relatively small land holdings.

Perhaps the greatest challenge for land stewards is that despite the amount of work to be done, there are still only 24 hours in a day.  Working as a land steward for The Nature Conservancy is incredibly rewarding but also impossibly complex and difficult – as is working as a land manager for any conservation organization or farm/ranch operation.  I still can’t believe I ever got hired as a land steward, or that I managed a fair amount of success in spite of my shortcomings, especially in terms of mechanical prowess.  It is my privilege to work with stewards like Nelson, Evan, and many others, and I am in awe of the breadth of their knowledge and the extent of their energy.  Not only are they caretakers of their particular natural areas, they are developing, testing, and sharing the techniques the rest of us need in order to conserve the rest of the natural world.