Many thanks for all the great feedback on my garlic mustard post earlier this week.  If there’s one big lesson from all the responses and suggestions I got via blog comments and emails, it’s that there is no standard effective treatment for garlic mustard right now.  In some places, one treatment works well, in others, the same treatment fails.  As seems to be the case with most invasive species issues, it’s important to use a variety of strategies and adapt over time as you figure out what works at a particular site.  That said, it was nice to hear that at least some people are seeing positive responses to treatments and improvements over time.

Now, for a more positive topic… 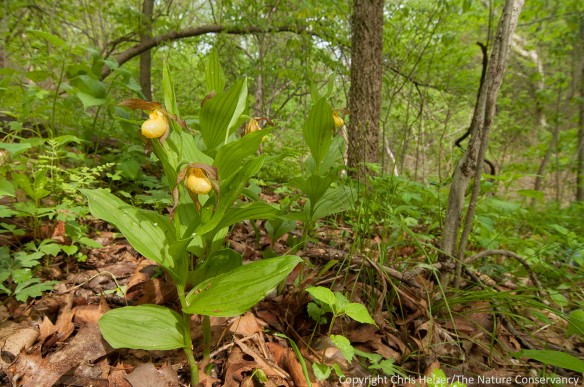 As I said in the last post, while we were at the Rulo Bluffs Preserve last week, we found several yellow lady’s slipper orchids (Cypripedium parviflorum) – one of Nebraska’s rarest plant species.  I’d love to say the orchids are responding positively to our management, but the truth is that all of the plants we found were in areas where we’ve done almost nothing!  They were on north or east-facing slopes where fire doesn’t carry well, and where we haven’t focused much of our thinning work.

They’re just thriving, and that’s good enough for me. 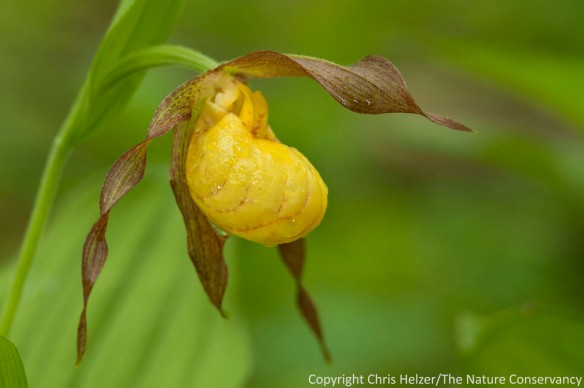 A close up of one orchid flower.

Last week, I helped arrange a tour of recently-burned oak woodlands at Indian Cave State Park, an eastern Nebraska site owned and managed by Nebraska Game and Parks Commission.  Indian Cave State Park is one of very few deciduous woodlands in Nebraska that is managed with prescribed fire.  The Nature Conservancy’s Rulo Bluffs Preserve is another, but while we started using fire back in the mid 1990’s, we’ve not been able to use it as consistently as we’d like.  Seeing the results of four years of annual burning at Indian Cave State Park was a good incentive to keep trying to find ways to increase our burn frequency down at Rulo.  You can read here about a fire we conducted at Rulo last year.

Kent Pfeiffer (center) stands in a portion of woodland that has been burned four years in a row and points out some of the changes that have occurred over that time.

The tour was led by Gerry Steinauer (state botanist for Nebraska Game and Parks) and Kent Pfeiffer (Northern Prairies Land Trust), who have been leading the charge for woodland burning in eastern Nebraska.  In addition to Kent and Gerry, and several other Game and Parks biologists, the tour group included staff from the Nebraska Forest Service and the Bureau of Indian Affairs.

We started by talking about why Game and Parks is implementing prescribed fire at Indian Cave State Park.  Some of those reasons include: