We had a terrific field day last week – thanks to the more than 100 people who came out to explore our Platte River Prairies with us.

There were two neat wildlife discoveries during the day.  The first came when Master Naturalist Mike Schrad caught a grasshopper mouse in a live trap while preparing for his session on small mammals.  Later, Chris Aubushon was looking for insects under old manure piles and instead found a western hognose snake!  I figured we probably had both hognose snakes and grasshopper mice on our property, but had never actually found either one, so it was nice to get both on the same day!

I didn’t get a photograph of the grasshopper mouse, but I did (with the help of Mike Schrad) get a few good ones of the western hognose.  Here’s one: 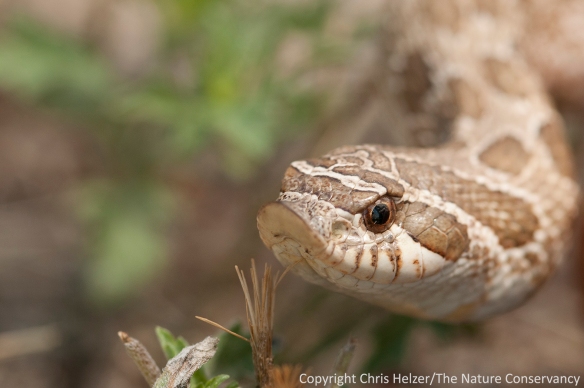 A western hognose snake caught at the Platte River Prairies.

If you missed the field day this year, we hope to see you next summer!

On Wednesday, our staff was out enjoying some beautiful fall weather and harvesting the last of our prairie seeds for the season.  Walking along a gravel lane, we found a small snake basking in the sun.  I didn’t recognize it, so I stopped to photograph it in case it was a species we hadn’t seen in our prairies before.  Thanks to Mardell Jasnowski and Nelson Winkel for helping me get the photo.  (And for being patient while I shot it from many different angles…)

A juvenile eastern racer (Coluber constrictor) – The Nature Conservancy’s Platte River Prairies, Nebraska.  As always, you can click on the image to see a larger and sharper version of it.

Juvenile eastern racers look very different from the adults of that species.  Adult racers don’t have any patterned markings on their backs, and are a uniform blue or green color on top and yellow on the belly.  In fact, they’re often called green racers or blue racers because of that coloration (also yellowbelly racers).  When I saw this juvenile, I didn’t even think about the possibility it might be a racer.  I was running through the names of all the snake species I could think of with brown and black patterned backs, and none of them fit what I was seeing.

Eastern racers aren’t the only snake species in which the juvenile has a different, more camouflaged appearance than the adult (black rat snakes are another example).  It’s also a phenomenon seen in other kinds of animals, including white-tailed deer and red-winged blackbirds – among many others.  I guess a little extra camouflage when you’re young and inexperienced in the world is probably a good idea!

Thanks to Dan Fogell for writing his excellent field guide, which helped me identify this snake.