I drove out to our family prairie yesterday to look for some early spring activity.  I scared up a couple of turkeys and a big owl, watched a red-tailed hawk soar for a while, and listened to the western meadowlarks tuning up for the breeding season.  No snakes were to be found, but there were plenty of leopard frogs along the edge of the pond.  I’d hoped to see some wildflowers, but there weren’t many blooming yet.  Apart from abundant sun sedge (Carex heliophila) plants on the steeper slopes, the only blooms to be found were patches of pussytoes (Antennaria neglecta).  Not that there’s anything wrong with pussytoes!

Our prairie sits right on the transition between tallgrass and mixed-grass prairie in Nebraska.  As such, it can be dominated by big bluestem and indiangrass, or by western wheatgrass, side-oats grama, tall dropseed, and other shorter grass species – depending upon recent weather and management.  Part of the property is unplowed prairie, but much of it was seeded in the early 1960’s by my grandpa soon after he bought the property.  The formerly cropped areas were seeded with grasses, but have also been colonized over time by many of the forb species from the hillier unplowed prairie on the site.

Pussytoes grows well in both the unplowed and seeded portions of the prairie.  It can be found in small patches consisting of a few individuals, but also in living room-sized populations.  The plant is considered to be allelopathic and reduces the height of surrounding plants, which makes large patches fairly easy to see.  It also seems to do well in the areas of the prairie favored by grazing cattle.  (Whether this is because the cattle are drawn to the shorter grass or because the pussytoes do well in heavily grazed areas I can’t tell – it’s likely both!)

Many of the pussytoes flowers were just starting to emerge, meaning that they were only an inch or so off the ground.

Regardless, the pussytoes had the wildflower blooming stage to themselves on this early April day.  I needed to scratch my itch for wildflower photography after a long winter, so I laid down with my tripod and focused in on a few plants.  As often happens when I take the time to sit down in a prairie, I noticed other things around me.  This time it was the buzzing of pollinators who had also noticed that pusseytoes were blooming.  As I watched, I counted at least 8 species of pollinating insects bouncing from flower to flower, looking for those with pollen-laden anthers.  Most of the insects were flies, but a few bees and a moth were among the visitors as well.  Elsewhere on the prairie I saw some orange sulphur butterflies too, but never actually saw one land on a pussytoes flower.

This was one of several fly species busily visiting pussytoes flowers. 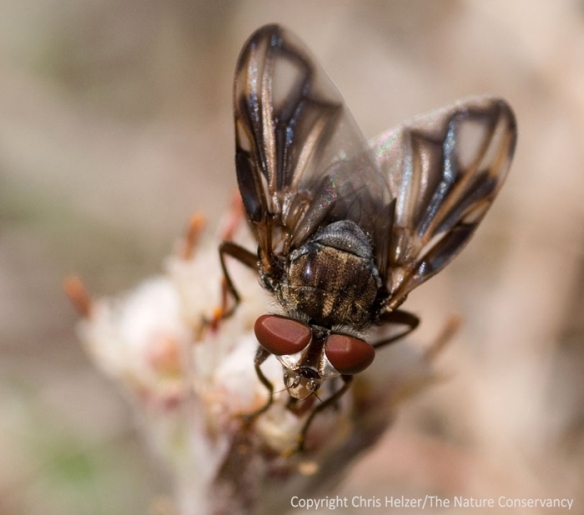 Another fly species (about the size of a house fly). 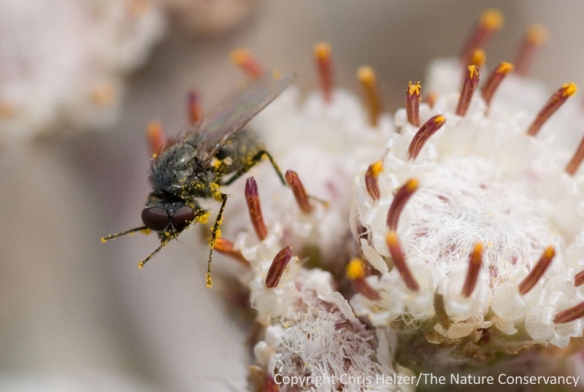 This was the only bee species I saw, though I thought I heard a bumblebee go by...

Since our prairie is a 106 island of prairie in a landscape consisting mostly of cropland, these pussytoes were not only the sole source of pollen in our prairie – they were just about the only thing to pollinators to eat for miles.  Not even the dandelions in the neighbor’s creek bottom had started to bloom yet.  I’d never thought of pussytoes as a critical plant for pollinators, but apparently I underestimated this low-stature plant.  I’m guessing it’s not the first time its been overlooked…

Yes, I know, this looks like the same fly species shown above, but I really like its face, and this photo shows it off better than the other one does...